A post shared by American Princess Cruises (@american_princess_cruises) on Nov 7, 2018 at 9:36am PST

Did you know that you can set sail off the Rockaways to go whale watching? That’s right. Whales, the largest mammals on our planet are just chilling out under the water, an hour out to sea from Queens.

In the last few years, humpback whales have returned to New York’s harbor for the first time in centuries. Gotham Whale, NYC’s whale research and advocacy organization, has noted an exponential increase in the number of whales since they began tracking them in 2011. The water quality has improved, so algae and zooplankton have multiplied, making food for the menhaden, food that whales go crazy for. To see them in action, American Princess has been offering a four-hour Whale Watching and Adventure Cruise that launches from Riis Landing at Jacob Riis Beach. It’s been running for the last nine years every May through early November most days of the week. They have a 90% sighting rate for a whale or a dolphin, which seem like pretty good odds considering this is right off the shoreline of the people’s beach! It’s incredible that no one I spoke to had heard anything about this.

Beyond just relaxing on a boat and seeing whales, by boarding the American Princess you can become a citizen scientist. Gotham Whale uses the whale watching activities of American Princess to collect data and make observations. Participants who take photos can help identify the whales since the patterns on the humpback whales’ tails individuate them from one another. I booked tickets for my family ($52/adult, $35/child) to join in the research. 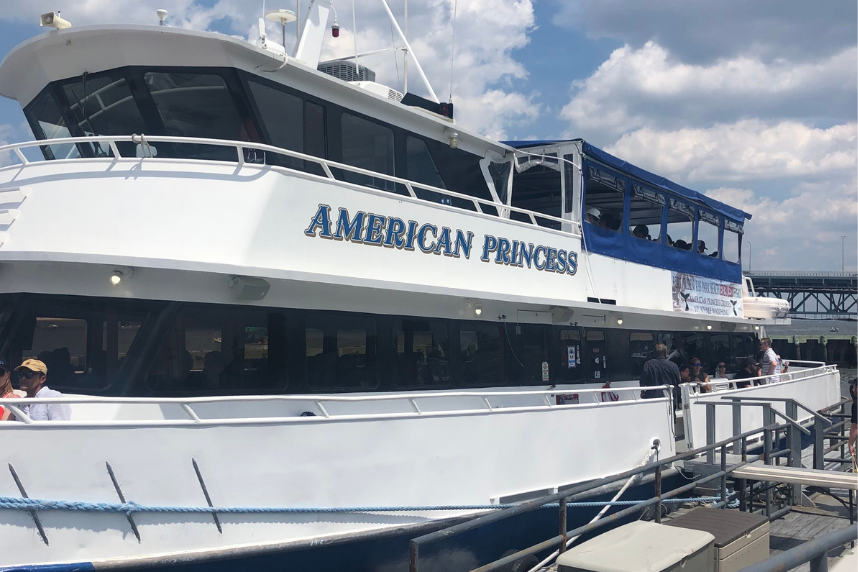 Unlike what the name implies, the American Princess is not luxurious enough for royalty.  Photo: Meredith Craig de Pietro

The boat leaves at 1 pm, and if you’ve made reservations but aren’t on board, the ship will leave without you. If you are traveling on a weekend you can take the American Princess cruise directly from Manhattan to the Rockaways (for an additional $15 each way) and just stay on board until everyone gets on. Otherwise, you can do what we did and drive to the Rockaways and park at Riis Landing for free. Once you get out of the car, you’ll most likely hear the drone of the woman on the microphone and her non-stop chatter that starts from the time people are boarding straight through re-docking. Right now she is talking about falcons in the area. I’ve purchased the tickets online, so they just mark our names on and we get on. “What’s the best seat for seeing whales?” I ask, but it turns out, that depends on where the whales are. By 12:45 pm, all the alfresco seats are already taken, and we end up inside sandwiched between a flat-screen television playing cartoons (why?) and an elderly couple. The woman on the microphone is causing auditory overload, and there is a chorus of people asking “What is she even talking about?” Even if you move seats, there are speakers everywhere. “Is it too late to get off?” my husband asks. “It’s non-refundable,” I answer. 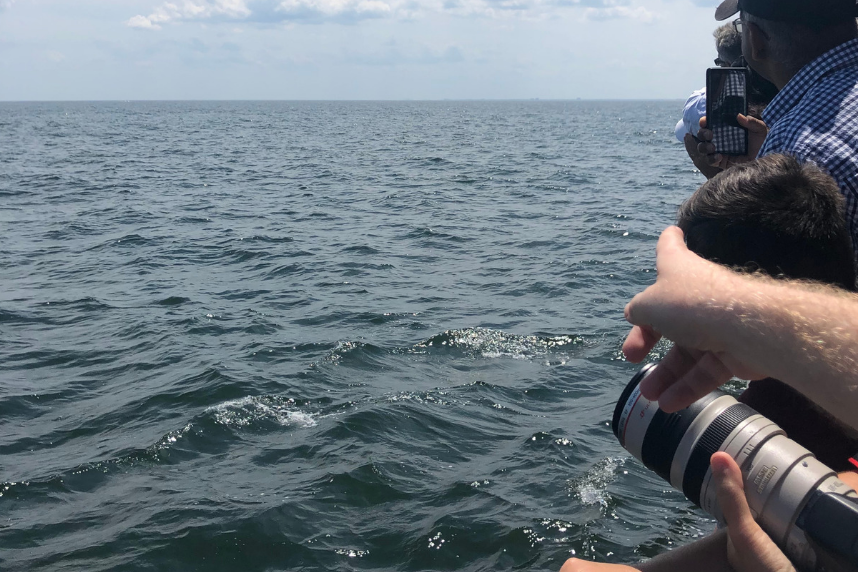 Most of what you do on a whale-watching expedition is to scan the water for wildlife. Photo: Meredith Craig de Pietro

We finally set sail, and looking out the window at the passing shoreline, we start to get into the spirit of things. There is a snack counter on board serving up chips and alcohol. Also, you can bring your own food onboard. Some of the creative examples include bagels and cream cheese, bags of Doritos, glass jars of kimchi, and Ziplocs full of ice. My husband goes up to get us two beers (warm) and a bag of Lays potato chips, only to find out it is cash only. Luckily, the crew member allows him to start a tab and use a card anyway. The beer is warm but does the trick, allowing us to relax into the American Princess experience. The boat is 95 feet and can hold up to 250 people on its upper and lower decks—today these include a family wearing matching Jersey’s Finest t-shirts, a group of vaping baby boomers, a multi-generational family yelling at each other in an unrecognizable language, photographers with telescopic lenses and at least one nun.

A post shared by American Princess Cruises (@american_princess_cruises) on Jul 15, 2019 at 6:19am PDT

We pass by Marine Parkway Bridge, Breezy Point jetty, and the Ambrose Channel which dumps us out into the New York Harbor. The waves are choppier here, and many people outside are splashed with seaspray. We’re in open water now, and we decide to step outside to stand at the railing to look for whales. We join the others already scanning the waves for a glimpse of a humpback. “Whale at nine o’clock!” someone yells. If the boat is a clock, then you gaze out where the hands would be to find the whale. We spot something silver in the distance and think that is it. The motor revs and we get closer. Could it be? A photographer next to me looks through her long lens and tells us that’s just a Mylar balloon drifting in the ocean. A few minutes later: “Whale at four o’clock!” Most of the boat rushes starboard. “Another whale at nine o’clock.” That’s just where we are. We gaze out. “I don’t see it!” my son says. Our eyes scan the sea. “Thar she blows!” someone yells. We see a spray come out of the ocean. Then a humpback whale. Its massive body curls up over the ocean and the tail flaps back under. It was less than thirty seconds, but there it was. Over the course of the ride we see SIX different whales; for some of them we glimpse a fin, others just a tail, but all sightings are accompanied by shrieks and cheers from our boat. Then there are cownose rays and the bottlenose dolphins, 150 of them, which seem to follow our boat, leaping and jumping like mermaids. At one point, a dolphin actually leaps over a whale. “This kind of interspecies play is highly unusual!” the voice announces. It’s like an oceanic paradise if you look past the floating garbage and other boats in the harbor. 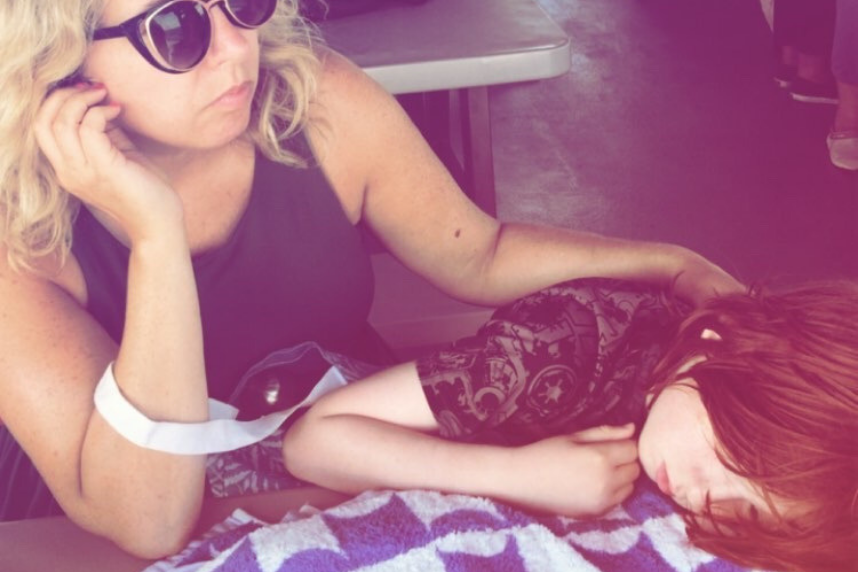 Almost about to throw ourselves overboard. (Photo: Antonio de Pietro)

At this point, I’m wishing I hadn’t had that beer. My son is complaining that his stomach hurts, and mine also is churning. We decide to go to the upper deck to the group of communal tables shielded from the sun. There, we join a community of the seasick in laying our heads down on the table, breathing in our nose and out through our mouths. “Whale at 5 o’clock,” the voice yells and we lift our head and take a cursory glance, then return to rest. With dolphins, we don’t even bother to lift our head. With stingrays, we don’t open our eyes. “Am I turning green?” my son asks. “No, that doesn’t really happen,” I say. “Really? Because you are,” he says. Breathe in through the nose, out through the mouth. Only two more hours left to go.

A post shared by American Princess Cruises (@american_princess_cruises) on May 4, 2019 at 5:47am PDT

Now when the voice talks about seeing one more whale (“Our favorite whale, Jerry, at eight o’clock”) in the harbor, I start to get mad. “We should be on our way back, for crying out loud! Why are we stalking these poor whales?” Half of the upper deck passengers seem to be asleep. Only the nun looks to be in good spirits. A woman who is still shrieking each time we see a dolphin is the target of my many overboard fantasies. I literally don’t care that she seems to be the mother of five, she will sleep with the fishes in a minute, if only I had a harpoon. Once the captain announces that we are heading home, I feel a bit better. It may be because we come off of the open water where the waves are not as sickening. I chug some water, spray on some more sunscreen and head over to the windows to watch the land roll in.

A post shared by American Princess Cruises (@american_princess_cruises) on Sep 26, 2017 at 8:36am PDT

Now we’re all looking at the photos and videos we’ve taken and as cell phone reception starts working, we can post our pics on Instagram. We ask someone to take our photo on the stern of the boat. We marvel at the wonders of the ocean. The woman on the microphone is still speaking a knot a minute. I can barely stand. As soon as we dock, I find the energy to jump up and sprint off the boat to dry land. Was it fun? Certainly not. Yet it did live up to the expectations of an adventure. It’s confusing: on the one hand, it was a unique and magical experience, and on the other, a roiling torture chamber. Would I recommend it? With reservations—and some Dramamine.