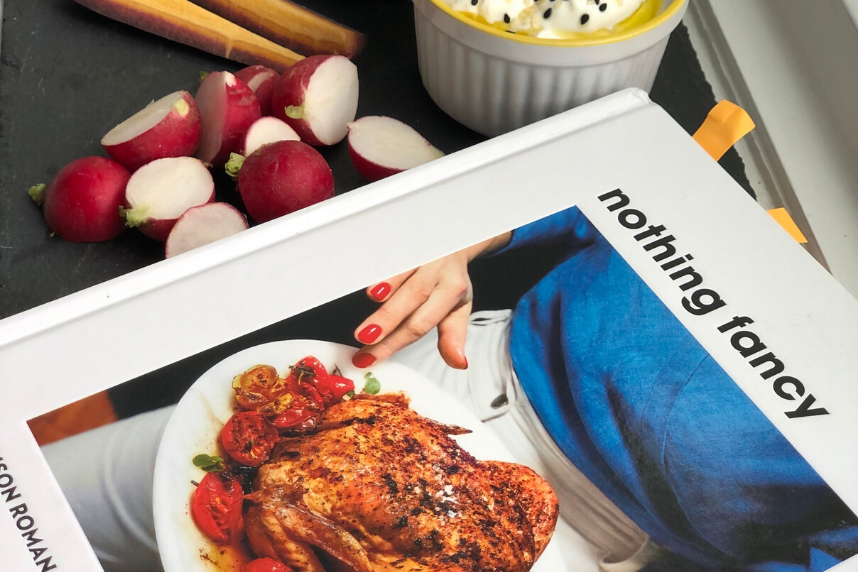 The very first words of Alison Roman’s new cookbook, Nothing Fancy: Unfussy Food for Having People Over, make it clear that she doesn’t want readers to get too hung up on the hosting part. “This is not a book about entertaining,” she explains. In the pages that follow, Roman makes cooking for people look fun and effortless. You can almost hear the music blaring in the background and wine being poured as friends gather around her kitchen to collectively prepare a meal. As someone who loves cooking and hosts dinner parties often, I know that it is far from effortless and in reality, a real labor of love. But alongside drool-worthy photos and recipes, Roman offers direct, unsugarcoated bits of advice to readers who might otherwise be intimidated to open their homes and kitchens to a gathering of friends.

Her less-is-more approach appeals to avid cooks, too. Eater named Nothing Fancy one of the Best Cookbooks of Fall 2019 and there was a line wrapped around Books are Magic to get into her Brooklyn book reading. The author, who is very much Brooklyn-based and can often be found perusing the aisles of Sahadi’s, is currently on a multi-city, cross-country book tour, but found a few minutes to chat about her philosophy on cooking, what she asks her own guests to bring to dinner and who she’d most love to cook for.

Do you think having people over and cooking is something that everyone can and should learn to love doing?

I definitely do. I feel like it’s not as hard as people think. I think it’s just a lot of work and like anything worth doing, I think it’s going to take a little bit of effort. I don’t promise the kind of cooking where you’re not going to have to do anything because I don’t think that exists. I think that there is joy to be found in the act itself, of chopping and picking herbs or carving meat and grilling vegetables. If you can learn to actually enjoy those things, then you’re going to realize that cooking as a whole is actually really fun.

I think people are often intimidated to host friends for meals in their homes, particularly living in New York City. Maybe because we’re in such close proximity to so many great restaurants or that we tend to live in tiny spaces, or just that people would rather not spend time planning, cooking and cleaning after a big meal. What are your greatest hopes for this cookbook and how do you think it might help change people’s minds about cooking and hosting?

I just wanted to give them confidence and sort of permission to not be perfect and the confidence to say, I’m going to try this and even if it doesn’t turn out exactly how I thought it would or as good as promised but you know, I’m still proud of it. But honestly, the feedback [from the cookbook] so far has been from people who don’t cook and say, I did this and still, it was amazing. I want to give them at least the confidence to just start trying. I think that even if you’re like, Yep, I did it, it was great and I’m still never cooking again because I don’t like it, that’s fine too. Not everybody has to love cooking and I don’t want to give the impression that if you didn’t find joy in it, that that was a failure somehow. But I just think [it’s worth] getting over this fear of it and not letting fear dictate the reason that you’re not doing something. 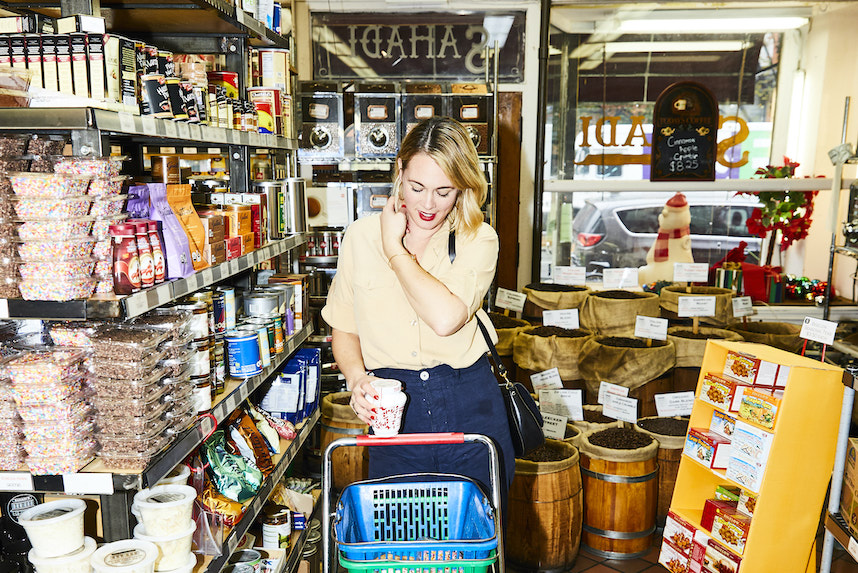 Can you walk me through the steps you take when thinking about creating meals for people? It seems you favor the spontaneous gathering of friends as opposed to a formal dinner party planned well in advance, but what inspires you first, the guests or the menu?

I don’t really do menus, but it’s more just the occasion and the amount of people coming over. So if it’s usually just a spontaneous gathering and really close friends and basically like, what do I want to eat tonight? That’s what I decided to make. It’s pretty arbitrary. If it’s for a specific occasion, then I might be a bit more thoughtful about what I’m going to serve and how. But because I want to manage the execution of it, I want to make sure that I’m not running around like a crazy person. But if it’s, say, six people I might be slightly more ambitious just because I’m able to take a little bit more time with everything.

I love that you give permission to readers to ask for help when preparing a meal. But what would you tell people who prefer to have everything planned, prepped, and plated before guests even arrive? What are the specific tasks best left for when everyone is gathered in the kitchen snacking on your corn nuts and dip?

Honestly, just things like picking herbs and finishing sauces, mixing yogurt together with salt and pepper and lemon juice as a sauce or slicing bread for the table.  I’ll even outsource the salad dressing for people. If I have my bowl of greens already to go, I’ll say, can you just season these with lemon and salt? And we’ll figure the rest out later. Also things like opening wine bottles, doing the playlist, I don’t ever make playlists. I make other people do that. Or things like making sure that the table has nothing on it. I’ll say, Hey, could you put the plates on the table? I don’t set the table or anything, but I will just put plates out for people. 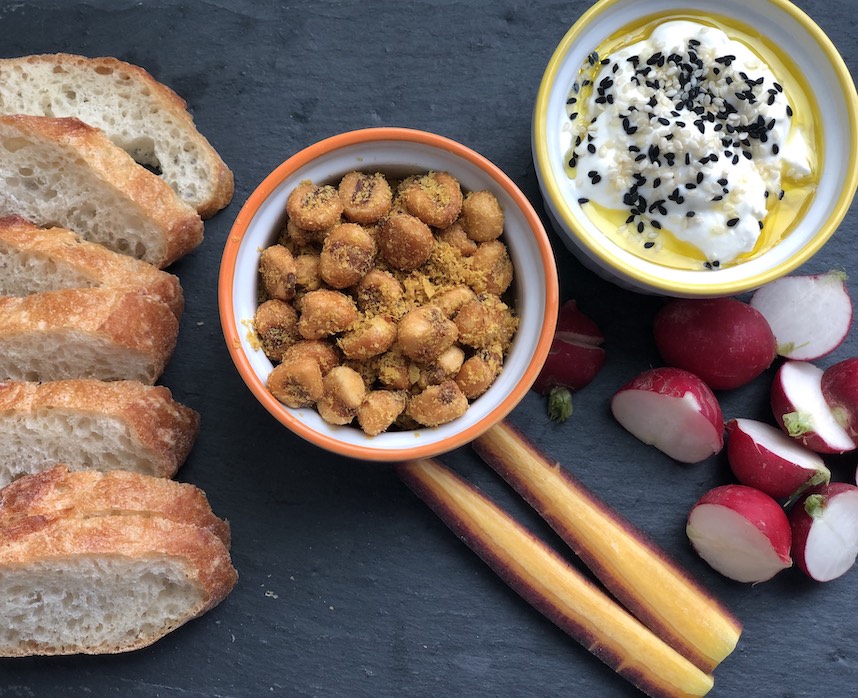 What are your “go tos” when friends ask what they can bring to a meal?

Oh, anything that I need help with. I’m not going to tell you nothing, I feel like that’s a lie. You can always bring something. A bag of ice, a few extra lemons, seltzer water, or anything I may have run out of or that I might actually need…that I feel are really important for the rest of the night. I’m going to absolutely ask that you to do that.

Your recipes seem to strike a perfect balance between making food look both beautiful and elegant yet casual and relaxed. How do you think you’ve been able to find that balance in your cooking?

I don’t know, I keep it pretty honest. I feel like I’m not trying to make anything look fancier or fussier than it is. I just think that food inherently is really beautiful. I think that visually I’m always looking for something that’s going to make me excited to eat it and then hopefully you’ll find yourself excited to eat it too. I think it’s like the Coco Chanel quote, ‘Before you leave the house, look in the mirror and take one thing off.’ Food doesn’t need a ton of stuff to be delicious or look amazing. Even in the book, when I was styling one of the recipes or cooking through them for the photoshoots, sometimes I’d be like, you know what? This doesn’t need a sprig of parsley on top. This doesn’t need cilantro scattered over it. This is just really beautiful as a hunk of meat sliced in a bowl. Just learning to appreciate food for what it is and not feeling like you have to dress it up all the time just for the sake of dressing it up.

There are ingredients in your cookbook that make appearances in several recipes that some people may not be as familiar cooking with. For example: labne, aleppo pepper, turmeric. Are there regions of the world, special trips you’ve taken, or favorite family recipes that you draw inspiration from when designing new recipes?

Not necessarily. I feel like it’s mostly just the ingredients that I have an affinity for that I will always have an affinity for. They kind of just keep appearing because I love them and I try to take into consideration variety and I don’t want to put labne on everything because I would. If it were a real honest account of how I’m really cooking, there’d probably just be yogurt beneath everything and chopped herbs on everything. I do want to showcase versatility a little bit but the ingredients that I gravitate towards and the spices and flavors sometimes evolve, but not as much as I would think. I’m not going to one day become a person who really likes sweet potatoes, I’m pretty secure in the fact that I don’t.

Pushing the limits of my mild shellfish allergy extremely hard this summer.

Can we talk about Instagram for a moment? You have cultivated a huge following of over 200,000 followers, your now famous stew even has its own hashtag, #thestew, not to mention your chocolate shortbread cookies (#thecookies). How do you find balance with the fact that Instagram always forces you to be on and in many ways takes you out of the moment when food is meant to be enjoyed with people in the moment?

Do you think people are starting to feel food fatigue on Instagram?

Yeah, I feel fatigued, just with social media and all that stuff. I can relate to people feeling that way. But food is something that we eat every day and I feel like finding new ways to talk about it is really important.

What are the basic kitchen tools that you can’t live without?

I have this plastic pastry scraper that I really love. I love my fish spatula and I love my tongs. I am a very basic person.

Finally, what guest would you love to see most (alive or dead) as a surprise guest at your next party and what would you cook for them?

I want to cook for Phoebe Waller-Bridge. I’d feed her mostly tiny snacks and maybe a bowl of cigarettes. 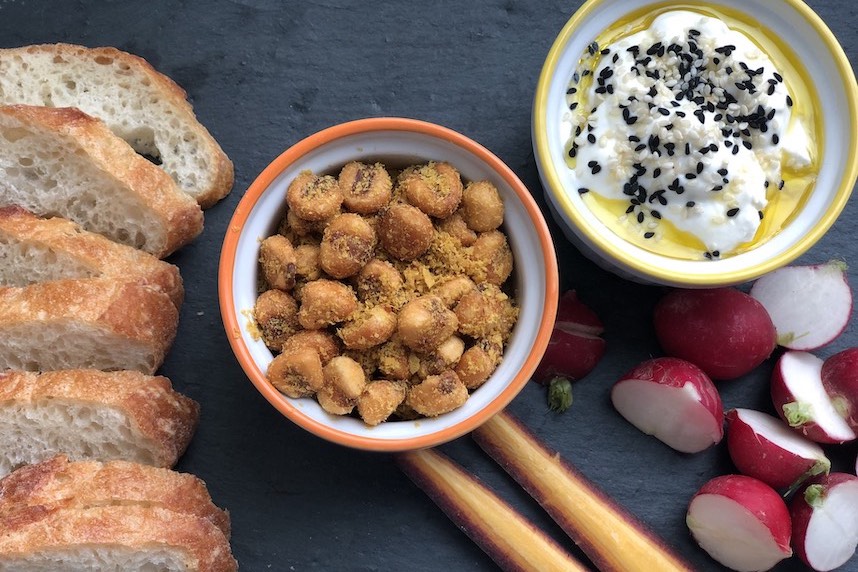 Review: Cooking with Nothing Fancy, plus recipes from the cookbook