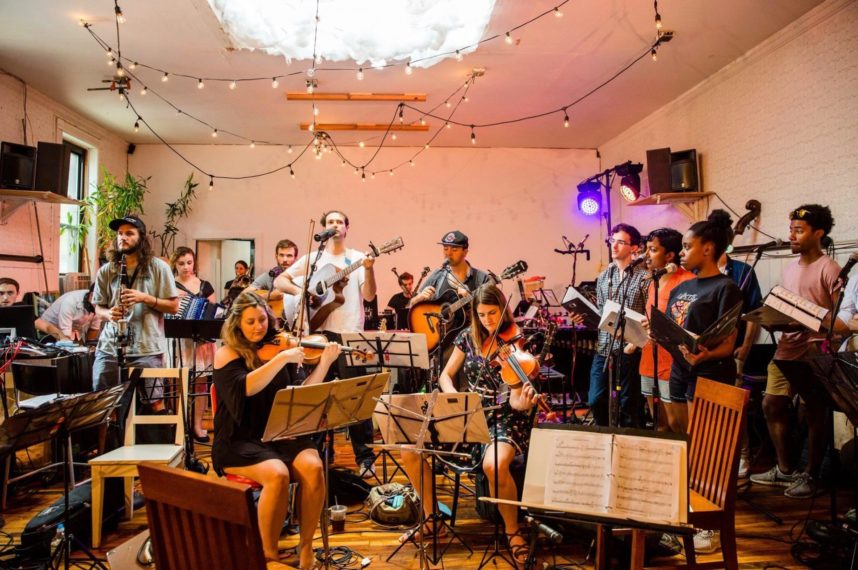 Apartment Sessions breaks out of their Bed-Stuy walk-up to perform live in a slightly roomier space. Photo: Liz Maney.

How do you squeeze 66 live musicians into a thousand-square-foot apartment without getting a single noise complaint? This is the magic of Apartment Sessions. If you’ve ever witnessed an unusually large number of young people carrying guitars, violins, accordions, xylophones, and trombones into a 3-story apartment around midday, you might be a neighbor of this multimedia artist collective. Led by a core group of 4 friends, Luke McGinnis, Evan Tyor, Drew Krasner, and Liz Maney, Apartment Sessions brings together large groups of musicians to record new orchestral arrangements of their favorite songs—in a very, very tight space.

Their largest session reinterpreted the Arcade Fire with the help of 89 musicians spread across 3 apartments. A big part of the project involves capturing this madness and wonder on camera, so you can watch their rich, rousing cover of “Wake Up” on their YouTube channel. They’ve recorded over 60 sessions in various locations, but they do the bulk of their work in a Bed-Stuy walk-up. (You can also listen to their first season on Spotify.) 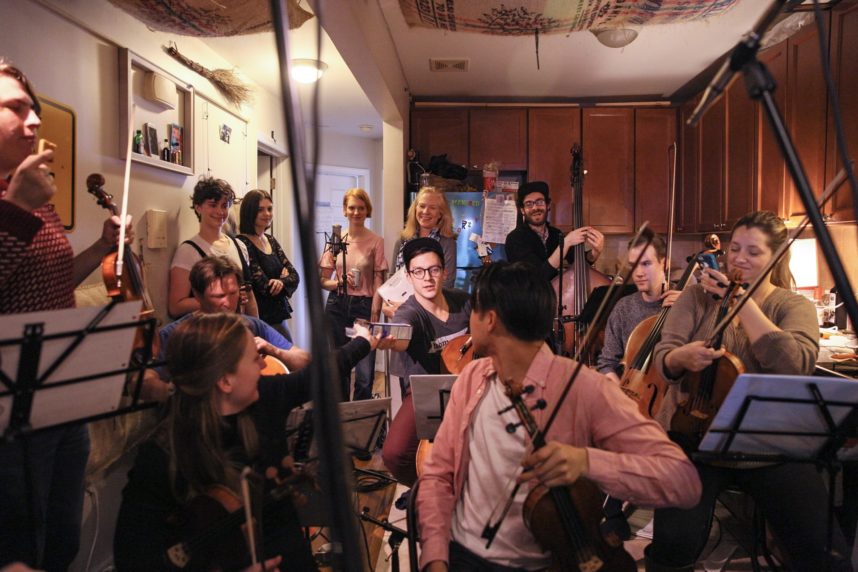 “Our Season One Finale, ‘Quiet,’ had 66 people in our Apartment. We had people in every room—even 2 upright bass players in the bathroom. Everyone gets to know each other really well while sitting together on a bunk-bed or on the kitchen counter,” says co-founder Evan Tyor. 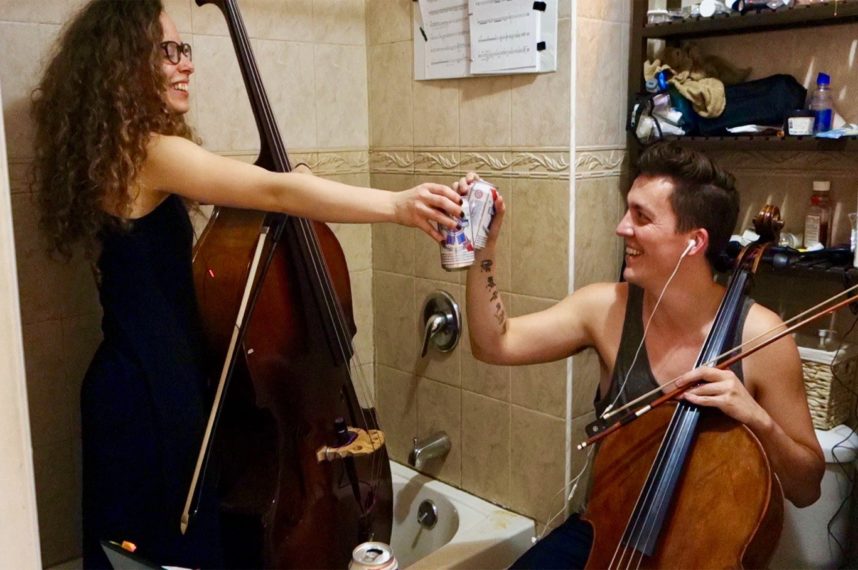 TFW you find a stand-up bass in your bathtub. Photo: Liz Maney.

Though the orchestras are normally a co-ed collaboration, a primarily female group of musicians got together for a recent session with Linqua Franqa, a rapper, linguist, and activist, a.k.a. Mariah Parker, who was visiting from Athens, Georgia. (You may recognize Parker as the elected commissioner of Athens-Clarke County in Georgia—photos of her being sworn in with her left hand on The Autobiography of Malcolm X and her right fist in the air were picked up by The Nation, Teen Vogue, and news organizations across the country.)

In the song “Eight Weeks,” Linqua Franqa weaves the need for reproductive rights into the emotional weight of deciding to terminate a pregnancy. In this performance, as the orchestral music swirled around her and a roomful of women nodded their heads to the beat, Parker stitched together rhymes with the quick precision of a sewing machine, “Prepared to fight for the right of choice / And yet embarrassed by the choice / If it’s just a parasite, why your eyes all moist?” The sound blurs the boundaries between chamber music, jazz, and hip hop. 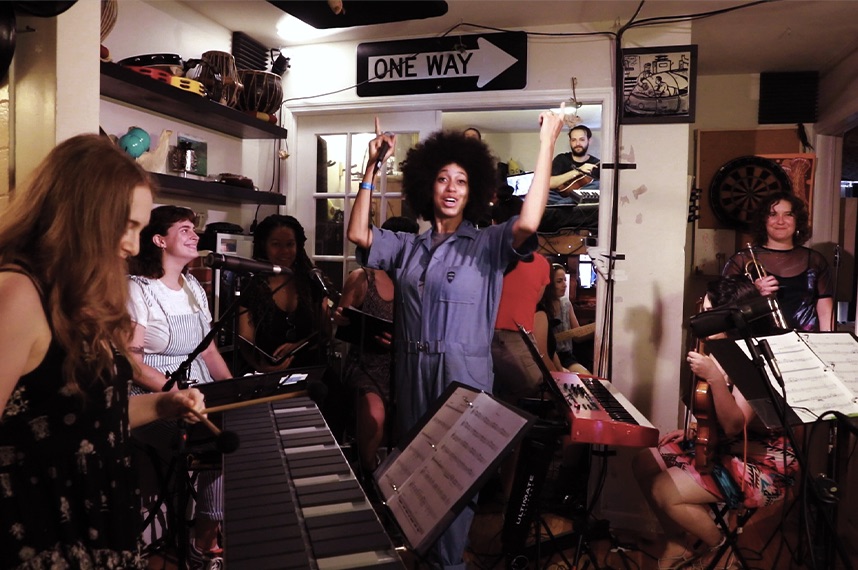 Luke McGinnis, Apartment Sessions co-founder and one of the only men in the apartment that day, was perched in a lofted bed with a keyboard, a ukulele, and some castanets. Beside him a percussionist alternately hit a cymbal, a triangle, and some chimes while occasionally rocking a shaker in her spare hand. And just to be clear, all of this was happening in a lofted bed, where the two musicians sat cross-legged, their heads grazing the ceiling as they rocked to the beat.

Beneath them, there was a drumset, an electric guitar, an electric bass, and a piano, a set of French doors opened to a trio of back-up singers, sitting on stools against the wall where a wood-carving read “RESIST.” Across from the choir, a keyboardist wore an Aztec-printed tube dress that revealed a treble clef tattoo over her heart. Halfway through the set, she whipped out a violin and started whaling on it with a big smile, seemingly untroubled by the woman jamming on a trumpet directly behind her. The trombone and saxophone players faced a fourth backup singer, who swayed in the snug space between the oven and her xylophone, three mallets bouncing in each of her hands. 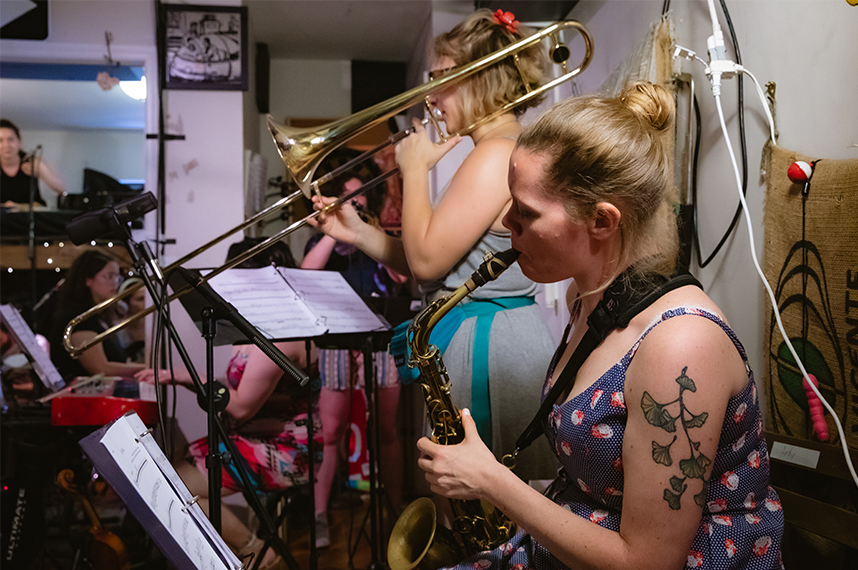 Saxophones, trombones, and keyboards, plus percussion on the top bunk. Photo: Liz Maney.

In the notes for this session, viewers were encouraged to donate to ARC-Southeast, which helps people seeking reproductive healthcare in Georgia, and the Apartment Sessions collective also has a Patreon to help fund their travel and pay their many musicians a small fee to express their gratitude. They are in the process of becoming a non-profit organization. Their goal here isn’t to make money but to build a diverse community through music and collaboration. Their tagline is “Create, Love, and #resist.”

But no matter how pure their ideals may be, this doesn’t really explain how they’ve convinced their landlord and neighbors to deal with an entire orchestra popping into the building a couple of times a month. What gives?

“We used to warn them, but we’ve never heard a thing from them, somehow,” Tyor mused. “We always record on weekdays between 11 and 3, so I think they’re just never around. Or if they are, they don’t mind. There are a bunch of musicians in the building, particularly drummers, so I think they get it.”

As for spotting their sessions in person, they recently recorded Stevie Wonder’s “Sir Duke” on an empty subway car, so you might just hear them outside of an apartment, too.