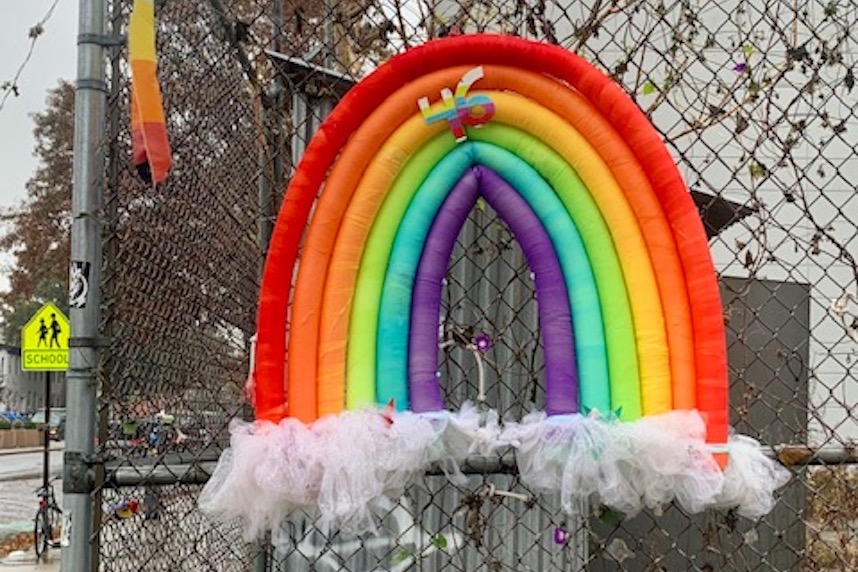 What a long five years it’s been. Photo: Kate Hooker

WHAT A WEEK! Before I even get into it, I just want to get it out of the way that I wasn’t in the city on Saturday, so I missed the pot-banging party of the century that happened, although I watched about a million shaky iPhone videos of the same so I was here in spirit. Instead, I got the news when my texts started blowing up in the deli section of a nearly empty small-town supermarket in Maine, the state that had just inexplicably given Susan Collins another 6 years to pointlessly clutch pearls. I’d been feeling optimistic all week and thought I was ready for the inevitable announcement that Biden hit 270, but nothing could have prepared me for what it actually felt like to be handing my boyfriend a jar of half-sour pickles one minute and hooting through our masks and embracing in the middle of the aisle the next, in a rush of relief and happiness, bathed in terrible fluorescent lighting against a backdrop of those weird hot pink sausage links and half-off, day-old bread. The emotional journey of that day has been hard for me to explain, but I definitely cried later in the evening, and not tears of joy. There was something so jarring about realizing the extent to which Trump and his shameless sycophants have occupied some part of my mental energy every part of every day for five solid years of my life, and just like that, poof!, he’s gone—freeing for sure but also depressing to truly begin to understand the full measure of what has been taken from us all. A friend sent me this piece by Buzzfeed’s Katherine Miller, which I found to be a highly resonant articulation of what I experienced on Saturday that may ring true to some of you as well. But I have to say, as the sad reality of what we’ve lived through sets in further, and we are forced to endure the further humiliations of the GOP’s attempt at a coup and Trump’s abandonment of any remaining pretense of actually doing the job we pay him for, there is nothing that anyone can do that will detract from my unbridled, admittedly petty delight at watching this over and over again.

Oh babies, we are for sure not out of the woods yet, as COVID numbers are surging everywhere and the government response feels uninformed and feckless, leaving us all to determine for ourselves whether the virus has gamely decided to respect indoor dining or the need to do burpees at your gym before 10pm but no later than that. As someone who has recently crossed state lines back into New York, I’m currently under quarantine, which means I’ve been eating a lot of leftovers (a massive batch of bolognese and spaghetti squash can be satisfying for a surprising amount of meals) and have watched all of The Queen’s Gambit and the three available episodes of The Undoing in a matter of days (the former is great, the latter seems to be hot trash that I can’t tear myself away from).

For those of you who can get out and about once this infernal rain ends, Black Restaurant Week is in full swing in NYC, so be sure to support one or several of the many excellent Black-owned small businesses in Brooklyn turning out delicious food. If you’re up for a trip into Manhattan, The Public Theater is displaying Say Their Names, an outdoor art installation and tribute to the thousands of American Black lives lost to police brutality and White violence, every night through December 5; and Lightbox in Hell’s Kitchen is hosting a 4-day Creative Code Festival, a curated exhibition of new media artworks, which you can attend in-person or virtually. If you’d rather stay local, tomorrow’s Gowanus Canal Shoreline Art Walk sounds like an easy way to get outside and see some art in a relatively safe way. Apparently, the Grateful Dead had an official tie-dye artist, and his work will be on display and available for purchase at a pop-up exhibit in the Rockaways this weekend, which sounds like something different to do, and Parklife is screening Knives Out in its spacious yard on Sunday night. The adolescent Comedy Central addict in me was excited to see that Dr. Katz: Professional Therapist is returning on Sunday afternoon for a live streaming show with guest patients like Jon Hamm, Andy Kindler, and Susie Essman, so I’ll probably tune in to that, and I also don’t want to miss Edward Norton’s virtual dramatic reading from Jonathan Lethem’s new novel, The Arrest, through the Center for Fiction on Monday night. If you’re into media gossip and the idea of a deep dive into Jeffrey Toobin’s disgraceful behavior that led to his recent firing, I recommend Fostertalk, a new newsletter from Gawker alum Foster Kamer (related: god, I miss Gawker. FU, Peter Thiel), and I also really enjoyed reading Reginald Ferguson’s farewell to the once-unflappable Century 21.

Otherwise, I hope we all get a chance to just kick it this weekend, for the first time in literally YEARS, while of course remaining safe and vigilant about the raging pandemic swirling around us. Happy Diwali to those who are celebrating, and fingers crossed for the kids in this City that we can all do what it takes to keep our schools open for them. They need it and deserve it, so let’s really buckle down, ok? We got this! May we all be spared anything remotely resembling bad luck on this Friday the 13th. Seriously, 2020, we’ve all been talking and we’ve decided that it’s high time for you to give it a rest, so lay off. It’s over, mofo.