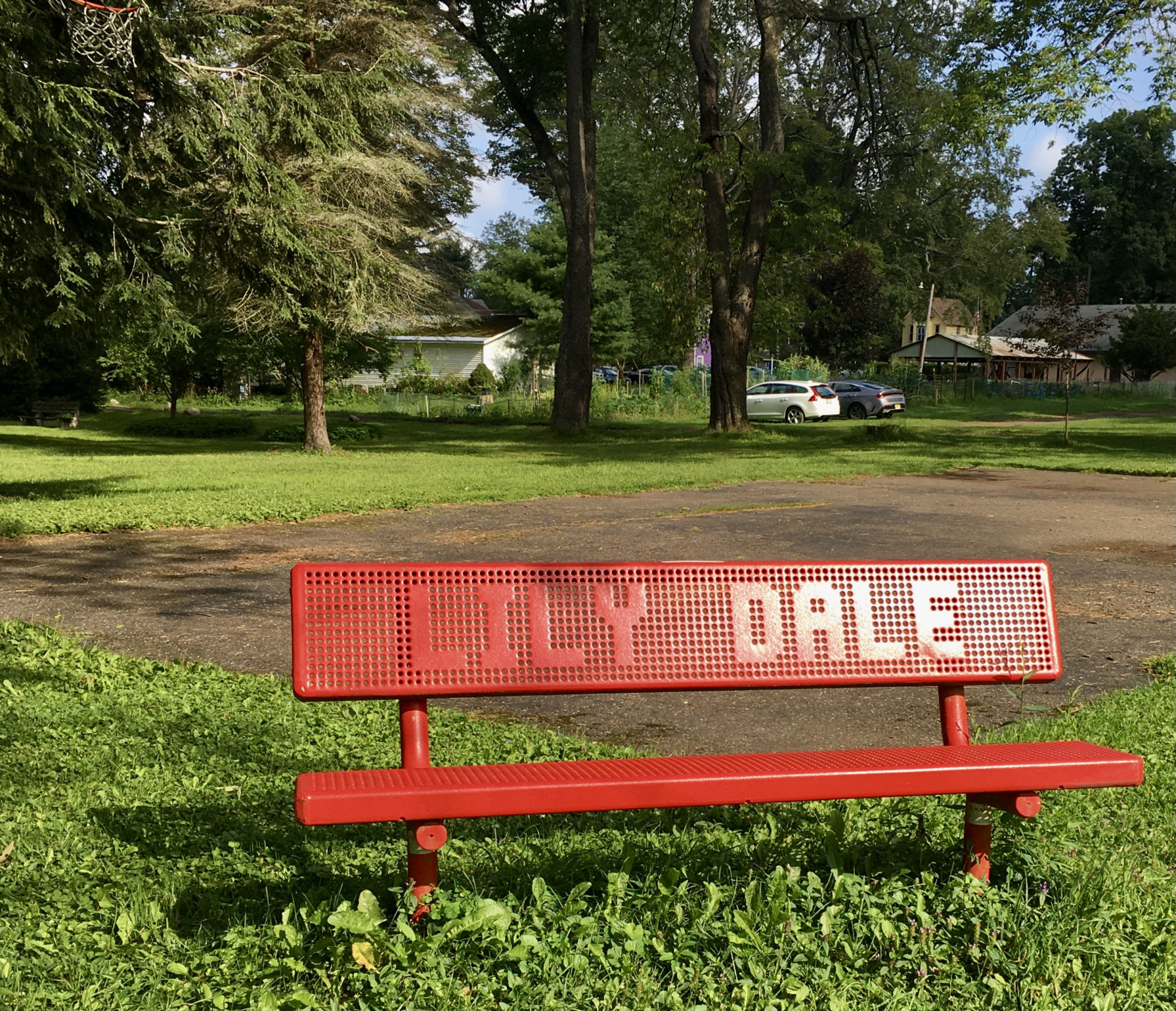 Lily Dale, the 142-year-old Spiritualist community in the southwestern corner of New York, is a bucket-list destination for those who want to disconnect from this world, and—with a little help from any one of the town’s cabal of registered, committee-verified, psychics, mediums, and healers—reconnect with dead loved ones in another.

But before you get here, your journey begins with a pit stop in Watkins Glen—the drive from NYC to Lily Dale is almost seven hours straight, so breaking it up into two halves is highly recommended. Plus, doing a little forest bathing in the breathtaking, soul-cleansing, head-clearing Watkins Glen State Park, feels like a spiritual experience in its own right. 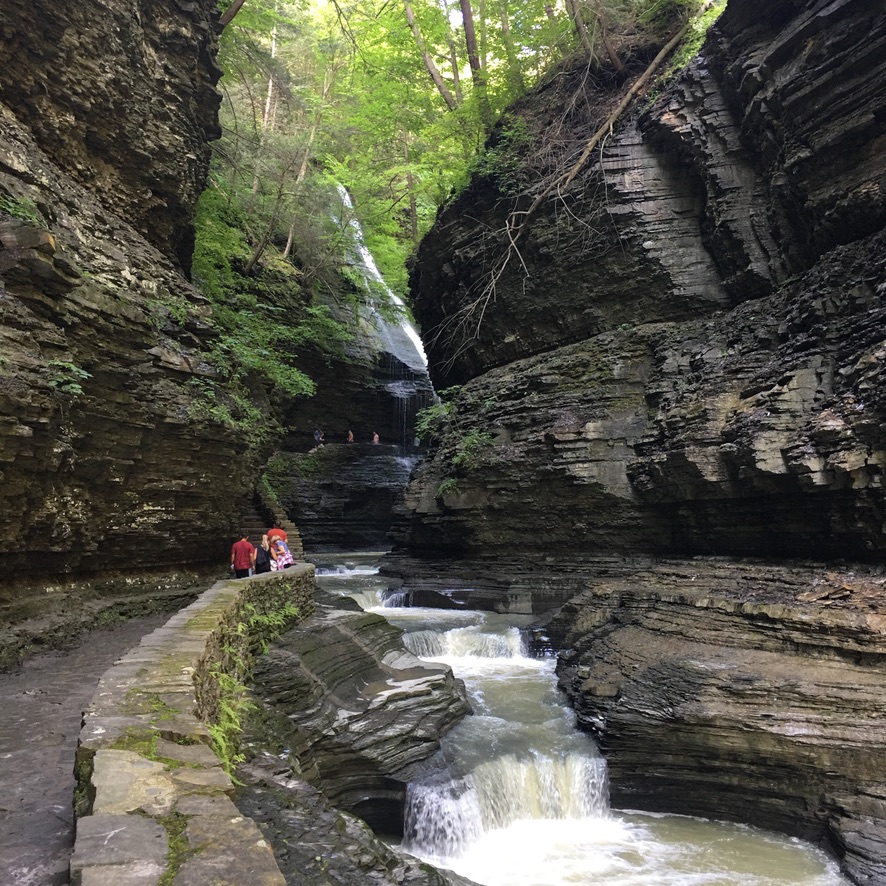 Once there, you’re going to want to hike up the hundreds of tightly-packed stone steps (at points, little more than three-feet wide) of the park’s legendary gorge trail that leads to 19, sun-dappled, thundering waterfalls cascading down 400 feet through jagged rock and tree-lined walls.

If you’re overnighting in town, bunk at the upscale Watkins Glen Harbor House overlooking Lake Seneca, the largest of the Finger Lakes. Beautiful views, fire-pit dotted outdoor patios, and an extensive wine list lend the place a Napa-like vibe, only fitting given its position at the crossroads of the state’s 32-vineyard deep Wine Country region.

Dine at the hotel’s Blue Point Grille, or stroll a few blocks down Franklin Street to the pet-friendly, women-owned Nickels Pit BBQ for locally-sourced ribs, chicken, pulled pork, cold beer, and all the trimmings.

For budget-conscious, points-accumulating road trippers (guilty here too), the recently opened Courtyard by Marriott 20 minutes away in Horseheads is a clean and comfortable alternative—with rooms starting in the low $160s. Staying there also gets you on the road to Lily Dale a few minutes quicker in the morning.

Just under three hours later, you’ll arrive at your final destination, “The Dale.” Once inside its main gate, $15 day pass in hand, serenity is palpable: Trees rustle, birds chirp, and voices are barely audible as you wander the narrow streets, passing the occasional local (there are a whopping 275 of them) gliding by in electric golf carts. Tucked between more exuberantly painted houses in shades of pink, purple, and bright blue are dainty, Victorian homes in woodsy tones, set back no more than a few feet from the roughly patched blacktop (the ‘lake effect’ from nearby Lake Erie means long, hard winters). 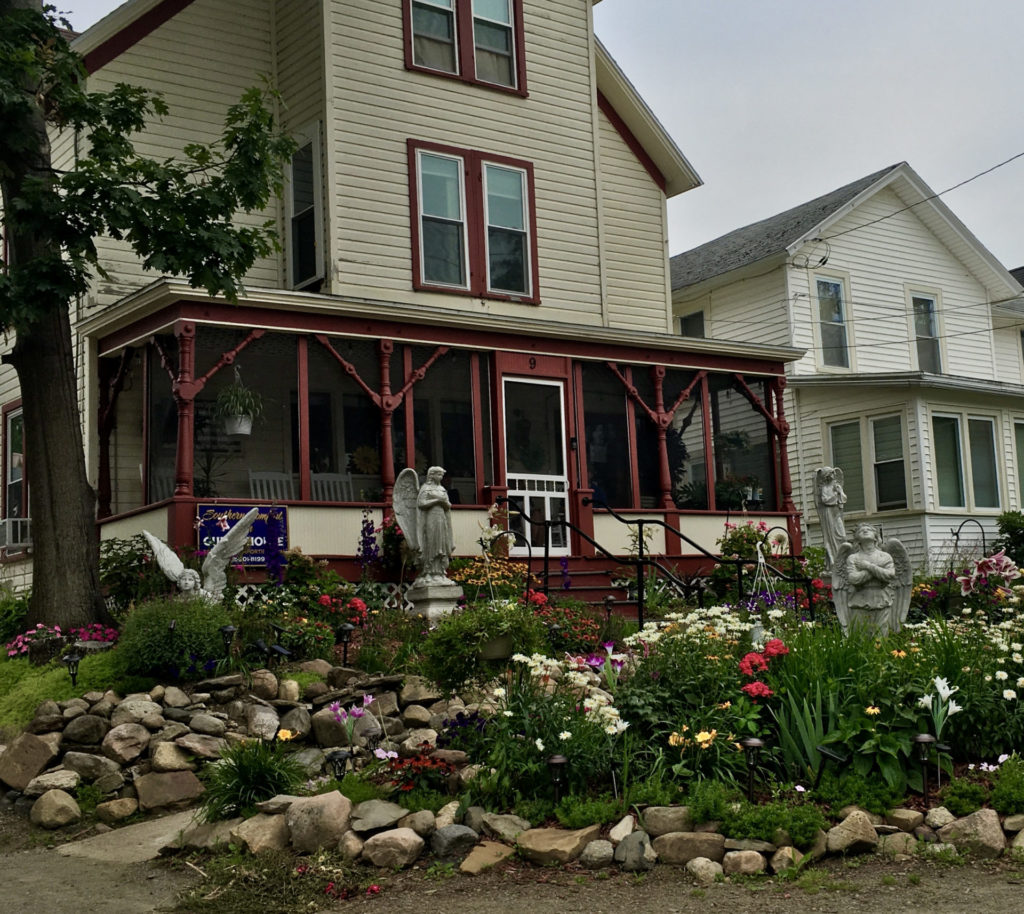 Virtually every one of them features postage-stamp-sized lawns packed with Touched by an Angel statuary and shiny, metallic “gazing globes” on pedestals that are intended to ward off evil and bring good luck. Anywhere else this slightly kitschy display may call for an emergency meeting of the block association, but in “Psychic Town USA,” the twee look charms and calms—part of its magic.

Depending on how deep of a dive you want to take, you can stay at any one of the town’s small guest houses, but keep in mind that rooms sell out so book in advance. If you’d like to step out of the spirit world at night (as we did), head over to the nearby performing arts and educational mecca of Chautauqua, and bunk in at the Athenaeum Hotel, a truly old-world grand dame, with soaring verandas and lake-side views that first opened its doors in 1881.

Either way, after you’ve checked in and dropped off your bags, it’s time to head out for a full afternoon of readings—the mediums all seem to feel money is in my future, thank heavens, and my late mom, dad, and brother-in-law are hovering close by which is reassuring.

Believer or skeptic, it’s hard not to be impressed by the sheer magnitude and depth of Lily Dale’s Spiritualist offerings. In addition to being able to visit as many practitioners as your schedule and pocketbook will allow (average fees for 30-minute readings run roughly $80–$100), there’s an 84-page catalogue listing hundreds of on-site summer programs, activities, and workshops—some for a fee, but many of them free—so students of the spirit world can learn more about mediumship and the world beyond this one.

Afterwards, it’s time for the Saturday night spotlight event with a noted spiritualist teacher and the next morning, a lovely, feel-good, Spirit-is-with-you Sunday service in ‘the Dale’s’ turn of the century, open-air, camp revival style auditorium.

Summer, from the last Friday in June until Labor Day Weekend, is high season in Lily Dale, but the community is open to visitors year-round. Before you book a trip, may we suggest watching the documentary No One Dies in Lily Dale to get a better sense of what awaits you once you arrive.