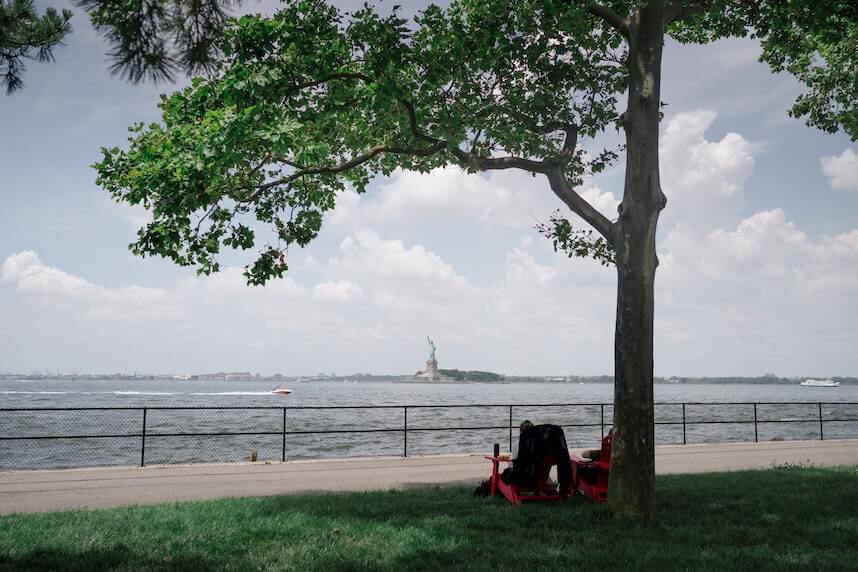 As if Governors Island weren’t relaxing enough, it now offers a spa. Photo: Photo by Laura Peruchi on Unsplash

Happy happy Friday, everybody, and welcome to the weekend! Not just ANY weekend, either, but that glorious one that comes only once a year, when the clocks switch back and the days get longer again and wretched winter’s days are numbered! I’m just back from Mexico for my first vacation in two years and all I’ll say is that I got just a taste of the sun and sand and I’m hooked once again.

What have you all been up to? Just doing your best to bore our new mayor to tears, I take it? (eyerollllll) Hopefully, you’ve been able to take advantage of the window of opportunity presented by the city’s low infection rates and have gotten out and about to do some fun stuff! And, if you’re looking for ideas or inspiration for things to see and do in the week ahead, well, you’ve come to the right place.

First of all, I’ve just learned that there’s a new spa open on Governors Island, and it looks like the ideal setting for my first massage of the 2020s, so I’m going to try to reserve it before the whole place inevitably books up. I’m also planning to check out the latest addition to Industry City, a new Japanese cultural and art center called The Loft that occupies the entire second-floor space above Japan Village. I still haven’t made it to the new Faith Ringgold retrospective at The New Museum, but Saturday’s live panel discussion about the artist’s enduring feminist legacy in honor of Women’s History Month is a good reason to make it a priority this weekend. But, if I wind up deciding to skip a train ride to the city, I’ll at least be sure to head to the plaza at 300 Ashland Place to see Drive-Thru, an outdoor film installation featuring the work of 8 local artists that will be on display through April 14.

Maybe you’re throwing caution to the wind and living it up while you can, in which case I’d say that this raging Robyn dance party at Brooklyn Bowl on Saturday night sounds like a pretty good time. If it’s laughs you’re after, I recommend grabbing tickets to Just For Us, Alex Edelman’s one-man show that just moved from the Cherry Lane Theater (where I saw it last month) to the Soho Playhouse for a new limited run that opens this weekend. The Public Theater’s long-awaited world premiere run of Suffs, Shaina Taub’s musical about the womens’ suffrage movement, is finally underway and I suspect that will be a hot ticket as well.

Maybe you’re just reveling in being able to visit bars and restaurants again. In that case, I can personally endorse the new Sunken Harbor Club bar above the renovated Gage & Tollner, where I had an absolutely delicious White Zombie a few weeks back, and the killer burger at the recently-reopened Grindhaus in Red Hook. Recently, I spent a lovely Sunday afternoon with friends on Columbia Street, drinking beers in the backyard of the Hop Shop followed up by a perfect pasta dinner at Popina. Otherwise, I’ve been drawing a lot of inspo from Grub Street’s The Year I Ate New York series, which is slowly getting me back in the New York groove and reminding me of all the great neighborhoods and restaurants that are still– even after a 2-year lockdown– just a subway ride away.

Finally, in my downtime I’ve been racing through The Lincoln Highway, a fabulous story told by one of my favorite storytellers, and I was moved to tears by most episodes of the first season of Somebody Somewhere, which I’m telling everyone who will listen to watch. Now that it’s over, I’ve been immersing myself in 1960s Naples yet again via the TV adaptation of My Brilliant Friend, which is back for a third season, and my boyfriend and I are obsessed with Fargo, which we somehow both missed when it originally aired.

Otherwise, just brushing off the cobwebs and getting ready for spring to arrive, while starting to low-key panic about where I will live after my building gets sold. Not sure if any of you have been pursuing the real estate markets around here of late but wowee, it is not a tenable situation. But, of course, problems like that seem preposterously insignificant when compared to the horrific reports out of the Ukraine, and I’d like to dedicate some time in the week ahead to figuring out how I can help in some small way — this list seems like a good starting place. I hope you all have a wonderful week and really get the chance to bask in the extra hour of sunlight we’re going to see starting Sunday — make the most of it!