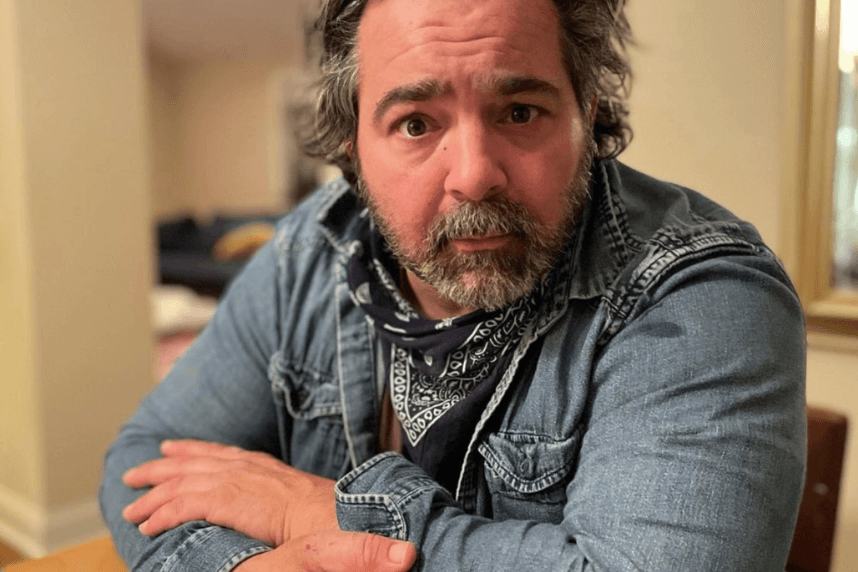 Patrick Gallo, star of “The Offer,” has lived in Red Hook for over a decade and loves it because the cobblestone streets “hum history.” Photo: Laura Corrin

The actor Patrick Gallo describes Red Hook as his favorite neighborhood because it “hums history.” He knows a thing or two about bringing history to life. His latest role is playing the part of Mario Puzo, the author and co-screenwriter of The Godfather, in the Paramount+ show, The Offer, streaming now. The show is about the making of Francis Ford Coppola’s landmark film, with a behind-the-scenes look at the trials and tribulations of getting it made. Gallo has appeared in memorable parts in films and shows like The Irishman, The Deux, and Boardwalk Empire. But a leading part like Mario Puzo was his chance to be an integral part of the show. “I found a lot of parallels between the way we saw the world,” says Gallo. “I just leaned on his passion and how much he cared about his words and his art and how much he valued being seen as an artist. And then from that point on, I let whatever come through.”

The Paramount+ show was shot on location in Los Angeles, but at heart, it’s a New York story. According to Gallo, when you see the finished product, it’s believable and a testament to how hard the crew worked to make the period piece seem completely realistic. He has lived in Red Hook for over a decade (now splitting his time in Buffalo) with his wife and son. “I love how beautiful the history is in Red Hook. You get to walk down these beautiful cobblestone streets and feel like you’re rooted in this long, incredibly rich history of the neighborhood. And it really embraces you.” From a classic Italian sandwich shop to modern gluten-free pizza, here’s where this actor eats, drinks, and relaxes in Red Hook.

“A roast beef sandwich from Defonte’s is absolutely one of my favorite things to be holding in my hands,” Gallo says. This classic Italian sandwich shop has been open since 1922 and still rolls out some of the most reliable delicious lunch options around. With a long deli counter and an even longer menu, it can be hard to choose. But Gallo insists the au jus sauce, the Italian bread, and the cold pepper salad piled on top of a warm sandwich is the perfect combination for a melt-in-your-mouth experience. “It’s just happiness.” 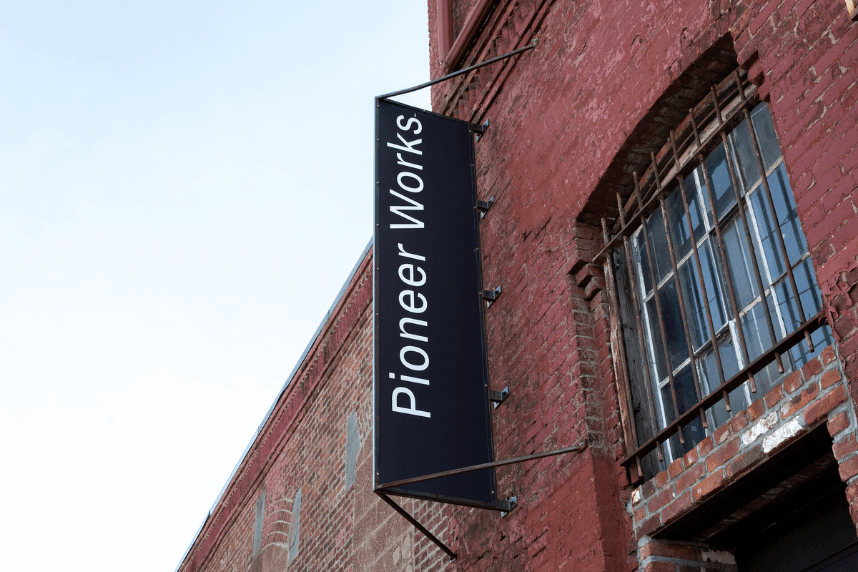 Pioneer Works’ is an institution in the neighborhood and their Second Sundays can not be beat. Photo: Walter Wlodarczyk, courtesy of Pioneer Works

Pioneer Works is the place to go in Red Hook for world-class art and events, but according to Gallo, the not-to-miss events are the Second Sunday events. They always have amazing music and unique art, and the outside area is a beautiful place to spend time, according to Gallo. The space is currently under renovation, and they are working out of a satellite location, but they will reopen this summer, and Second Sundays will return. Mark your calendars! 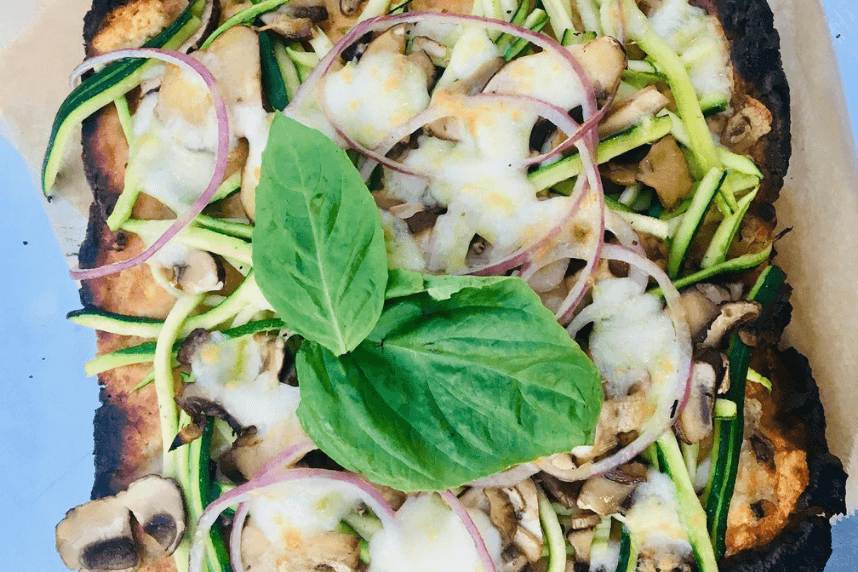 Although there’s more pizza in Brooklyn than one could try in a lifetime, Hoek makes its mark by serving “Roman-style brick oven pizza.” Gallo loves the gluten-free mushroom pizza, which he calls fantastic, but the restaurant also serves carbs for omnivores. The cavernous space and the lovely cocktails make it a favorite neighborhood hangout, and on a beautiful spring day, the people watching from the sidewalk seating can’t be beat. 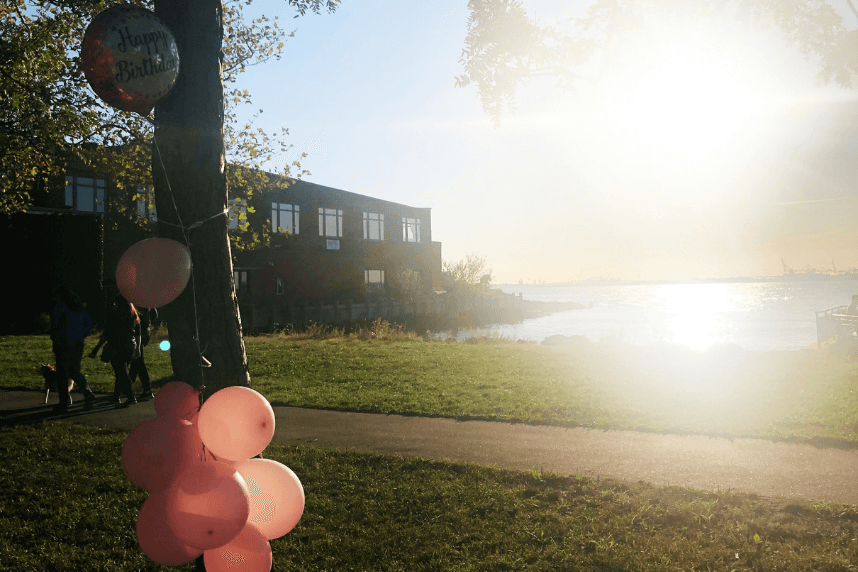 Red Hook has some of the loveliest sunsets around, and the Valentino Pier is a popular place to watch them. Photo: Meredith Craig de Pietro

One of the more beautiful spots to sit outside happens to be in Louis Valentino, Jr. Park in Red Hook. You can often find Gallo at the pier watching the sunset. “I won’t sit on a blanket though,” he says. “I have to have a chair with me.” He loves the sunset even more if he can be comfortable while admiring it. “Everyone’s just so delighted to sit on the ground, but I’m not buying it.” 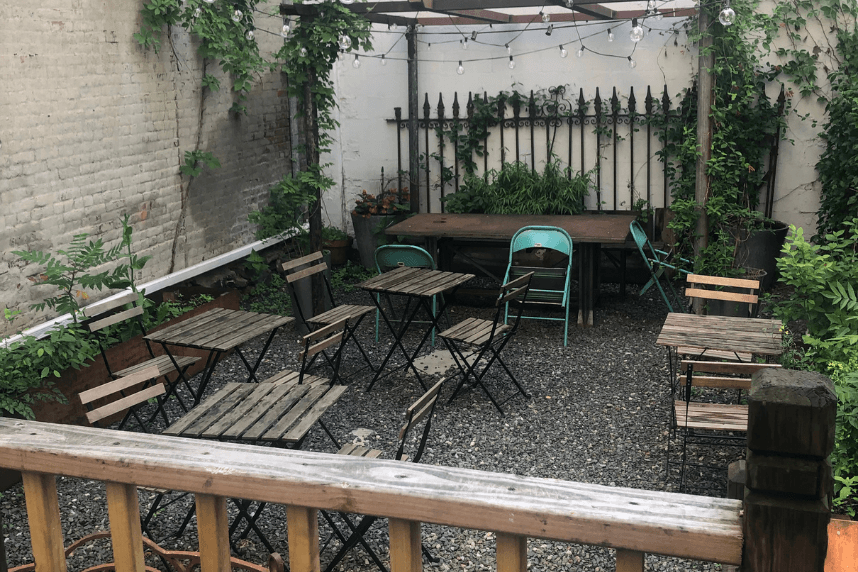 According to Gallo, Black Flamingo serves some of the best coffee in Red Hook. And their yard is the perfect place to sip it. Photo: Meredith Craig de Pietro

There are unlimited options for great coffee in Brooklyn, but Black Flamingo rates for also having a beautiful backyard. They also have great ham and cheese and pastries, according to Gallo. “It’s a really peaceful place to hang out,” Gallo says. Or come back later for cocktails and music (events are listed on their website).

“Red Hook Pool Days” by Laura Corrin is just one of the photographs on display at Coffey Park. Photo: Laura Corrin

The streets of Red Hook are literally lined with art. Gallo’s wife, photographer Laura Corrin, has a photograph titled “Red Hook Pool Days” hanging in Coffey Park, as part of a show sponsored by Red Hook Art Project and Art Gowanus. According to Gallo, Tiffiney Davis at Red Hook Art Project has done so much for the neighborhood, and everyone should check it out to support her and all the artists participating in the show. 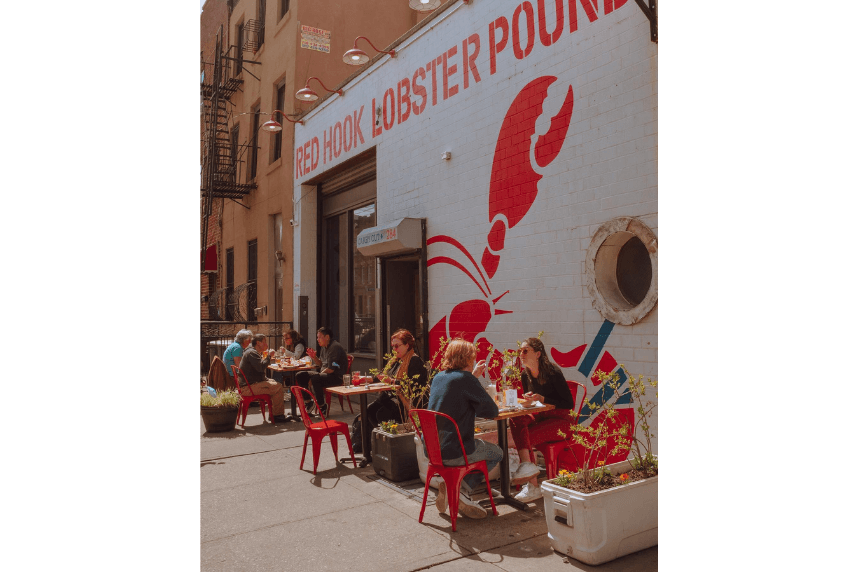 It might be hard to not order lobster at Red. Hook Lobster Pound, but according to Gallo, it’s worth trying something new. Photo: @redhooklobster

Although this New England-style lobster pound may be most known for the lobsters they fly in daily from Maine, according to Gallo, the thing to order is the peel and eat shrimp. This is very different from a shrimp cocktail, which is cold and comes unseasoned with cocktail sauce. “They give you a big order, they’re seasoned perfectly, they’re hot and just very satisfying,” says Gallo. He’ll sometimes put in two orders of them and eat them as a meal.