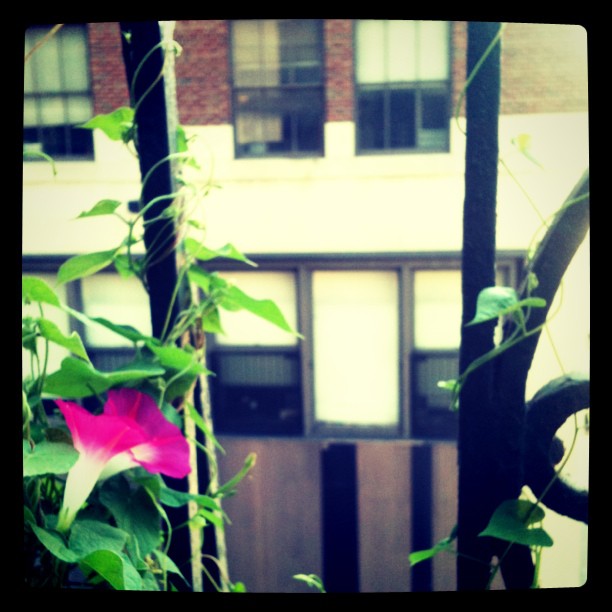 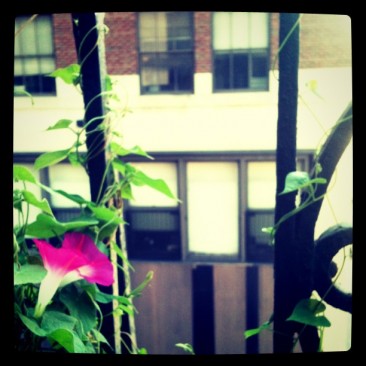 Disparaging New Jersey is a pastime once restricted to New Yorkers, but it’s gone global thanks to such blights on humanity as Jersey Shore and Jerseylicious. But despite the stereotype of the state as an industrial wasteland of pollution-belching chimneys, growing up in the Jersey suburbs about an hour from New York City, I felt sorry for kids who had to grow up in urban areas because they didn’t have houses or yards. In summer I could read all day on various grassy knolls, or take my book up into one of the apple trees, or on the deck, or by the 1950s cement swimming pool. Like most of our neighbors living up to the Garden State’s nickname, we had a large garden with a fence around it so the deer wouldn’t help themselves to the tangles of plants bearing tomatoes, peppers, eggplant, strawberries, and watermelon.

Now, as I sit typing in my fourth-story prewar apartment, three feet to my right on the fire escape are hundreds of plants–a garden in the sky comprised of vegetables, herbs, and flowers, which is visited by the occasional bird or bird duo. I maximize the fire escape because it’s the only outdoor space. I’d put up my beloved camp hammock out there if there were enough room. This probably distinguishes me from other New Yorkers, and it very likely puts an expiration date on my time as a Brooklyn resident.

Beyond the garden, in a new building across the street, I can see numerous private terraces. The first time I saw anyone set foot on one of those terraces was about 358 days after we moved back, and then it was because five fire engines were making a commotion the street below. I’ve decided those apartment owners, who no doubt paid significantly extra for their outdoor space, are jerks for never using their terraces.

Over on the other side of my apartment building, towering over it by about 20 stories, is another new building where residents can optionally purchase private rooftop cabanas–little segments of the roof to use for sunning and entertaining. And by “little,” I mean a portion akin to that of an elevator car, bordered by a fence lined with Astro-turf for privacy. 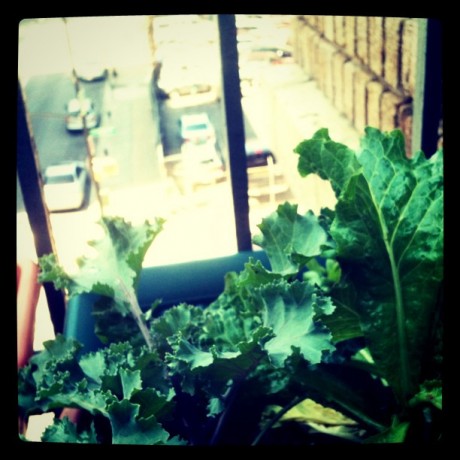 I don’t know whether to laugh or cry about the cabanas. OK–I’ll laugh. I said earlier that the fire escape is the only outdoor space but that wasn’t accurate, because like many Brooklyn residents with the option, we make good (if technically illegal) use of the roof. It’s the yard. It’s where we grill, it’s where we host barbecues, it’s where the dogs get brushed, where furniture gets painted, and where the compost cooks in a plastic tub under a layer of soil. It’s fugly, but it’s free. I’m glad to have the “yard,” but it’s also sad compared to, say, an actual yard.

For me, buying an apartment in the city is anathema. It doesn’t compute. You’re supposed to agree to pay close to a million dollars and then you still have to live in an apartment with no yard next to some yappy asshole dog? I do relish that in my neighborhood I can have food delivered from almost 100 eateries, but I’d rather have a proper kitchen to cook in, and a yard to grow as much of that food as possible. If we have a kid, it would be nice if he or she could go to sleep on summer nights listening to crickets or cicadas, instead of a garbage truck or car alarms or an enraged person ranting on the street.

Back to the garden: it’s my favorite thing. It seems like the answer, a way to a positive future. Sitting on the radiator, I space out staring at the greenery like the hippie I’ve always been, thinking, if only growing things could be my job, or one of my jobs…but I don’t know how to make that happen. I look forward to coming home to the plants and seeing what has changed since I last looked at it, and seeing if any new future veggies have appeared.

My husband and I are composting fanatics. We got into it while living in Baton Rouge, where we had a great little yard and our cayenne bush was more like a tree. Being composters means we’re enthusiastic about the soil we’ve created and its amazing powers. It’s black gold, dammit! But you know who doesn’t care about soil in a city? Pretty much everybody. In Brooklyn, unless you’re a rooftop farmer (or are lucky enough to have a backyard), soil is dirt, the stuff that blows in the window and, at the worst of times, into your face, and it’s what makes the rats the exact color of the subway tracks.

Probably because of that nutrient-rich dirt we’re so keen on, our Brooklyn garden contains too many plants for the amount of space and soil. The heirloom cherry tomatoes are especially crowded, as about 150 shoots arose from 50 seeds. Even after giving away dozens of seedlings, we still have dozens, and now each plant is vying with the others in its pot to crowd the other ones out.

My childhood feeling about city living seems to have returned. On weekend trips upstate and in the Berkshires I’ve taken to combing over real estate publications. I signed up for a Trulia account (each visit to its website or app is a guaranteed procrastination K-hole), and favorited two dozen properties where you can get a proper house and serious acreage for drastically less than the price of an apartment in the building next door. Owning a home has always been a goal, but now it’s like my biological clock for nesting has gone off, and it doesn’t care about practicalities. The desire has officially flowered into house fever.

I jotted notes for this column during the subway portion of my one-hour daily commute to work in New Jersey. I was lucky to have a seat, but the car was so packed that contact with others was unavoidable. One woman’s bag wrinkled my book page, a man dangled his newspaper in my face, and a woman’s crotch was unpleasantly proximate to my knee.

I couldn’t help thinking of the tomato plants getting crowded out.

Colleen Kane is a writer and she sometimes tweets helpful and/or disturbing messages into the ether. Will work for yard.