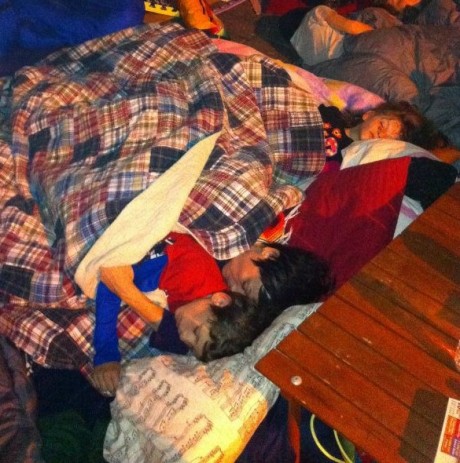 Juice boxes, glow bracelets, stuffed animals and cupcakes are not typical items to bring to a demonstration. Unless you’re feeding and entertaining parents and kids at an Occupy Wall Street family sleepover in Zuccotti Park.
On Friday, October 21, roughly 80 parents and kids, ages three months to thirteen, spent the night in the park, while 500 families participated in the event over the course of the evening and following Saturday. The area, cordoned off with rope, had an entrance where parents patiently waited in line to sign in and out. Both Occupy Wall Street demonstrators and parents volunteered as security designated with fluorescent yellow shirts.

Kirby Desmarais, a Brooklyn mom and owner of the Everything Independent record label, started Parents for Occupy Wall Street in early October. She didn’t want to talk about her personal reasons for protesting, fearing that it might pigeonhole the group as a whole.

“I want to stay anonymous,” Ms. Desmarais said, “because it’s more important that [all] parents feel like they can participate.”

The group came out of a practical need for secure places for parents to be with their kids at the demonstration. While visiting Occupy Wall Street with her 18-month-old daughter Georgiah (also known as Baby G), Desmarais noticed a lot of families. But because of the high foot traffic, she saw them keeping their kids in strollers or close by. So she started organizing specific child-safe areas at Zuccotti Park, and the kid-centered movement was born.

“We took extreme measures,” Ms. Desmarais said about the security for the sleepover. However, she is skeptical about stories that Zuccotti Park is a particularly treacherous place for children, “it’s as safe as any street fair you would bring your kids to.”

Early in the evening indie-kiddie musician Dan Zanes stopped by to play songs for the families. A parent in the group had reached out to the musician about coming to play.

Zanes performed inside the barriers and his set list included the old Labor Party song, “I Don’t Want Your Millions, Mister.”  He may play at another event the group is planning, but Ms. Desmarais didn’t want to give details yet. 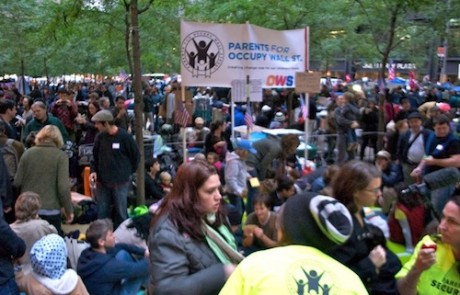 Some parents took the sleepover as an opportunity to come to the demonstration for the first time with their children. David Powell, from Bay Ridge, brought his 5-year-old daughter Ivy and a friend to “lend our support to a growing movement that is trying to reverse the gross inequities in our country.”

Mr. Powell, who was laid off from a non-profit job two years ago, had not been to Occupy Wall Street until Friday night.

“If you haven’t come down to check it out yet, this is an opportunity to announce to the world and to the police, that there’s going to be a lot of kids here,” he said “so you all–meaning the police–should be on your best behavior.”

After eating pizza that was donated by Mark’s Pizzeria in Red Hook, the group snuggled up in sleeping bags as the park got colder and darker. From yoga mats to foam floor coverings, the scene looked more like an urban campsite than a place of protest. By 9 o’clock most of the little ones and their parents had tuckered out, despite the call and response of the human microphone at the nightly General Assembly.

“It is nice to see the kids and also the parents trying to get more involved,” said non-parent Cesar Siroco-Mistral from Prospect Heights, who was curious about the specially sectioned- off area for parents and kids. He said it was good to see regular parents participating in what had at times been a confrontational demonstration, citing previous police confrontations.

Though the family sleepover happened only one night, the presence of parents and their children is not new to Occupy Wall Street. And the momentum of parents and kids participating in other Occupy movements, Ms. Desmarais says, continues to grow. She says groups in 18 states have gotten involved and similarly family-centered demonstrations are popping up all over the country from Oakland to Chicago.

Parents for Occupy Wall Street will continue to be in the park as the demonstration continues, monitoring their specially cordoned-off area for families to hang out in. Ms. Desmarais says that the group is also standing up to help act as the community watch in the park. The parents make sure that demonstrators are observing the “Good Neighbor Policy,” which includes sweeps through the park four times a day.

As the weather gets colder, Ms. Desmarais knows that parents will want to have warmer places to bring their kids. Parents for Occupy Wall Street, she said, is talking with places in the area where people can bring their children as winter approaches.  Even still, she isn’t worried about participation dropping off because of the weather or even the holidays.

“It all depends on how things play out,” she says “because the revolution goes from moment to moment.”