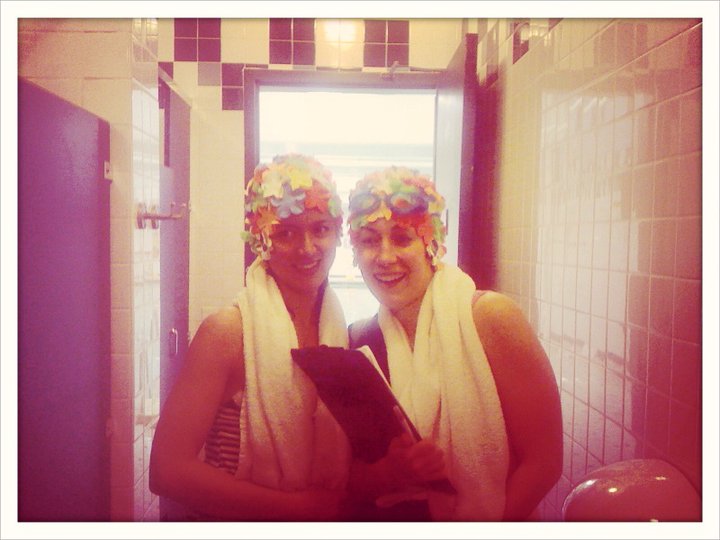 When you think synchronized swimming there are a few things that may come to mind–funny bathing caps with plastic flowers, glitter and red lipstick. Or, maybe it’s Miss Piggy, gliding gracefully through the water in the Jim Henson classic, The Great Muppet Caper. Add peaches, and our fair borough to that list. Nicole Sciarillo and Nicole Salm have started their own synchronized swim team called The Brooklyn Peaches at the Dodge YMCA in Brooklyn Heights. It’s the first to hit the borough, but let’s all agree that in light of Brooklyn’s embrace of roller derby and trapeze as alternative workouts, and a general love of costumes and all things old-timey, it’s probably not the last.

When she was growing up in California, Sciarillo took synchronized swim lessons, but it wasn’t until last year, when she started dreading the thought of her treadmill in the winter months, that she realized the sport would make a great workout. “The trained professionals smile and make it look easy, but it is basically running in water,” Sciarillo said. “You need a very strong core to keep yourself up the whole time.” Your feet are never supposed to touch the bottom of the pool during a routine, which typically runs about three minutes. You’re always treading water without the help of your arms and most importantly, you have to keep in time with the rest of the team. 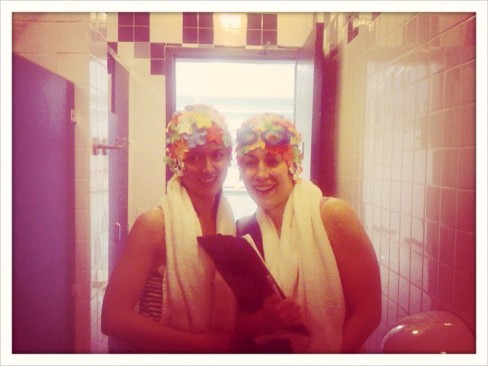 Sciarillo and her friend Salm, who grew up swimming and has a background in dance, wanted the class to be an introduction to the sport and also an opportunity to teach students a real synchronized routine. They accomplish all of this in only eight weeks. While the ladies take the sport seriously, they also have a lot of fun with the performances using modern music like Blondie’s “The Tide Is High” and most recently “Barbra Streisand” by Duck Sauce. They use hula hoops and often wear fingerless lace gloves to bring a little bit of Madonna down onto the pool deck.

Anna Beth Weber, a friend of Sciarillo and Salm’s, was the test case to see whether the two Nicoles could really teach what they loved. Weber does not consider herself a great swimmer or even much of a dancer. It took her hundreds of tries to get the basic moves right, but she finally did it. She now says that now, the showgirl in her definitely comes out the minute she puts on that red lipstick and her retro-style black one-piece and jumps in the pool.

“A small part of your brain registers, I’m 35 years old, I’m in a swimsuit, in broad daylight in front of a whole bunch of strangers,” Weber said. “But the rest of your brain says, ‘I’m gonna do jazz hands and I’m going to spin around.’ Then another part of your brain is like, ‘Four, five, six, kick. Seven, eight, twirl.'”

The sport has a way of bringing out inner performers. Since starting in February of 2011, Sciarillo and Salm have had students ranging from a 74-year-old woman (who had to stop because of an arm injury) to a lone male who has been brave enough to get in the pool. Every Tuesday when the girls (and guy) meet at the Dodge YMCA’s pool on Atlantic Avenue other swimmers can’t help but stare.

“People would be doing laps and they would stop and say, ‘Is that synchronized swimming?’” Sciarillo remembered. “They had always heard of it, maybe seen it on TV but they didn’t know where they could learn it. It was really fun to realize that there was a lot of curiosity.” 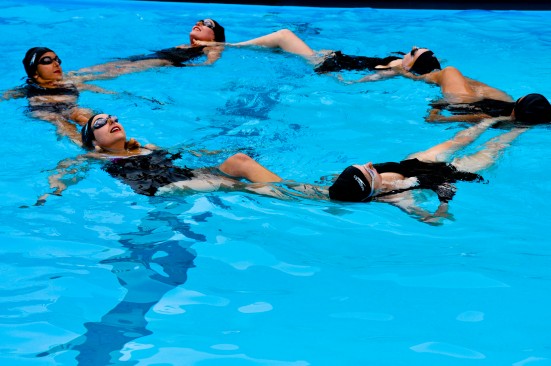 The Peaches in the pool.

One of those curious people was Kate Pennell who has been taking the class since the very beginning. Though she had always watched in awe of the sport’s Olympic athletes, she was surprised by how taxing it was on the body. ”You get cramps from trying to do weird things that your body is not accustomed to,” Pennel said while describing one particular move called the ballet leg. You float on your back and lift your whole leg out of the water till it’s perpendicular to the pool surface. It sounds simple but it’s no easy feat, even for someone like Pennel who has been swimming most of her life.

For the students, the class is a chance to explore something new, and to get off the treadmill and into the water, but Sciarillo also hopes it offers an escape from adulthood, even if it’s only for one hour a week.

“You see kids just experimenting with tricks and playing around, not worrying about how they look,” she said. “ Hopefully we’ve created the same kind of spirit.” What the Nicoles have created is a little bit of Esther Williams, a touch of modern burlesque and a lot of Brooklyn. It’s a real workout that looks like way more fun than other core-strengthening routines, like pilates. Though Weber never imagined she’d be on a synchronized swim team said that she hopes more people will take the plunge.

“It’s not [just] for old people and it’s not for athletes. It’s not just for dancers or ballerinas,” she says. “It’s for anybody.”

The eight-week session runs every Tuesday night from Nov. 1 to Dec. 20 at the Dodge YMCA, and they are still accepting latecomers, if you missed last week’s first session. The class is $120 for YMCA members, $180 for non-members. Email Nicole and Nicole at brooklynsynchro@gmail.com with questions.