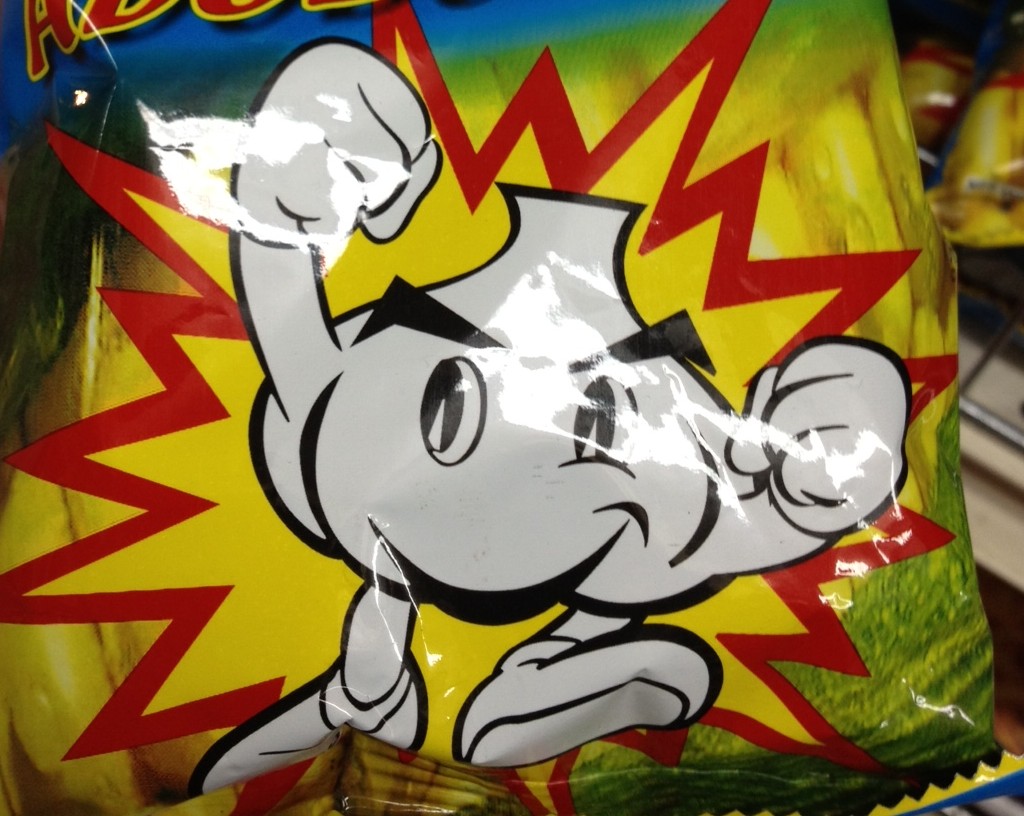 I got the idea for this slideshow from this clam, which is so excited about being eaten it is licking itself. My sister who lives in Seoul sent me the picture from a takeout menu.

These shrimp are exactly not what I am talking about. They are simple line drawings with no feelings or character–mere illustrations.

This squirrel is also all wrong. He’s eating fruit like a human, not eating squirrel-flavored crackers like a cannibalistic lunatic.

Food-as-chef is one major category of anthropomorphic grocery items, as this can of mushroom broth demonstrates.

The Aunt Jemima of China?

Somehow this fish learned how to be a chef AND a clown.

The smiling fish seems also to be drooling over its own deliciousness.

“Eat me! I have no articifical colors,” says this good-natured soybean.

Though it’s almost a logo, the surprised googly eyes on this squid really say it all.

Sorrowful resignation, that’s the term you’re searching for. A touch of disappoinment, too.

This little taro bun buddy does not seem all that stoked to be eaten. He’s pointing at you, angrily.

Mushroom-shaped cookies fill this package so this angry little guy doesn’t quite fit all the criteria, but he’s just so pissed I had to include him.

There’s a real Kool-Aid Man vibe going on with this angry head of garlic.


Have you ever noticed how many Asian food products have anthropomorphic animals and vegetables on the packaging? Yes, American food culture does it too, but the Asians have a very particular style. We love Tony the Tiger for his can-do attitude and plucky neckerchief, but he’s not on a box of tiger-flavored breakfast cereal. For the most part, we don’t make animals we’re going to eat into lovable characters–barbeque restaurants and toque-wearing, aproned pigs being a notable exception to this rule. Yes, there’s Mr. Peanut, the California Raisins and the claymation M&Ms, but who has sympathy for a peanut? Especially a snooty upperclass peanut with a monocle? (Americans also have a weird proclivity to buy food items from neutered monsters–Count Chocula, the Jolly Green Giant, whatever Grimace is supposed to be, Wilfred Brimley.)

Asian consumers, it seems, like their food to be so delicious that the food itself cannot wait to dig in. To itself. Their food mascots are simultaneously more generic and much more emotional; these dancing crabs, mushrooms and chickens seem to have a distinct viewpoint about their imminent consumption, ranging from insane joy, to sorrowful resignation, to rage.

I spent an afternoon in Chinatown, taking photos of foods that fit the following criteria: The cartoon object has to be either the item in the package or its main ingredient (or flavor). It has to have some sort of personality or obvious feelings. A line drawing of a squid, a photo of a crab or a monkey on a package of banana-flavored cookies do not count. Take a look at all the foods, from happy soybeans to sad pigs, that are submitting themselves for our enjoyment.