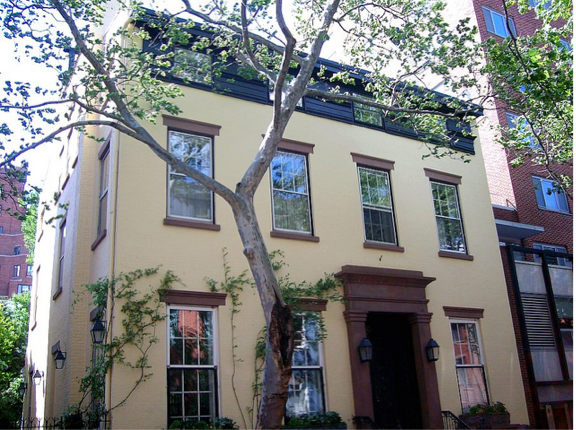 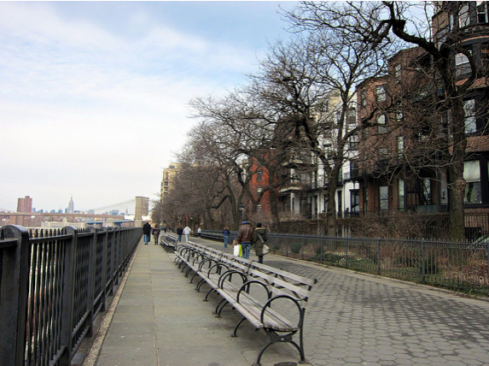 Many a writer has strolled the Brooklyn Heights Promenade searching for inspiration.

By the 1830s, Brooklyn Heights had already become one of New York’s elite enclaves, studded with lavish townhouses and easily accessible to Manhattan (first by the steam-powered Fulton Ferry, introduced in 1814, then by subway), but cut off from the average New Yorker. Today, the neighborhood remains a world apart, guarding its Victorian sensibility, multimillion-dollar brownstones and serene streets from the rest of the city. In the early 20th century, however, the neighborhood experienced a decline that persisted until after World War II. Back then, Brooklyn Heights had a tawdry air, its derelict grandeur attracting some of the 20th century’s most notable writers to its shores. 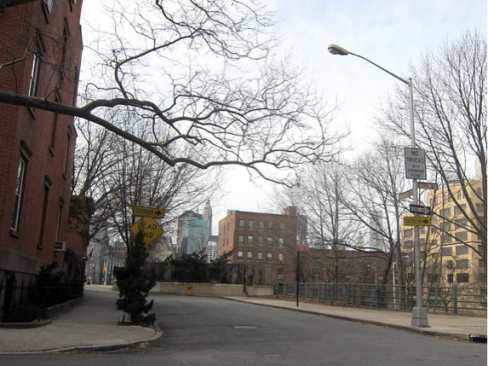 The site where 7 Middagh Street once stood.

Here are a few of the most famous former stomping grounds of literary greats:

The Bohemian Boarding House: 7 Middagh Street
Literary editor George Davis claimed that the idea for his creative commune in Brooklyn Heights came to him in a dream. Now, as the rush of the Brooklyn Queens Expressway passes below the dead end street where the house once stood, the impossibly vibrant stories of the place feel like a fantasy. In 1940, Davis moved into 7 Middagh Street, a house with a charming gingerbread facade on a maple-lined street with views of Manhattan, with the young writer Carson McCullers, who had just published The Heart Is a Lonely Hunter, and W.H. Auden, who was then one of the most famous living poets. Soon after, Gypsy Rose Lee, the legendary burlesque entertainer, and composer Benjamin Britten (with his lover, the tenor Peter Pears) joined them.

What started as well-controlled chaos often fell into turmoil, with an ever-increasing number of writers and artists wanting to become residents, a bedbug infestation, and the order-loving Auden left to regulate the house, setting daily dinner schedules and sometimes abruptly kicking out unruly visitors. Yet 7 Middagh remained an integral part of the intersection between artists, writers, and composers arriving in New York from Europe, and creative natives.

The house was also an oasis of tolerance for those who were often ostracized for race or sexual orientation. Over the five or so years the commune existed, guests included composers Aaron Copland and Leonard Bernstein, the author Richard Wright, surrealist painters Salvador Dali and his wife Gala, as well as Pavel Tchelitchew, who one evening painted the walls of the drab drawing room in a surrealistic mural of warped colors and strange shapes. The bohemian party at 7 Middagh sobered when America entered World War II and finally ended in 1945, when the whole street was condemned to rubble to make way for the BQE. 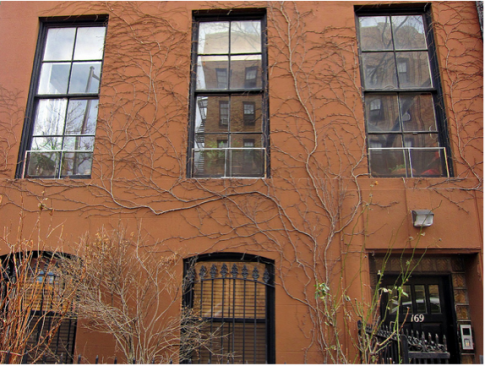 Even the ivy on the exterior of H.P. Lovecraft's former home is a little bit spooky. 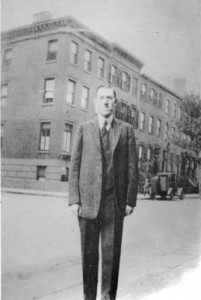 On the eastern edge of Brooklyn Heights, 169 Clinton Street has an unsettling look in contrast to the posh neighborhood that surrounds. Its brown paint is peeling and vines grip the walls in spiderweb patterns. H.P. Lovecraft, its resident from 1925 to 1926 and the author of stories of brain-gnashing horror, wasn’t too keen on it himself, saying: “Naturally I would have shunned a lodging which seemed to savour of coarseness, but here again unusual conditions conspired to deceive me.”

He also claimed that his Middle Eastern neighbor “played eldritch and whining monotones on a strange bagpipe which made me dream ghoulish and incredible things of crypts under Bagdad and limitless corridors of Eblis beneath the moon-cursed ruins of Istakhar.” While Lovecraft didn’t exactly enjoy his time in Brooklyn Heights, the locale (and his apparent xenophobia) did serve as inspiration. His story The Horror at Red Hook, written while living at 169 Clinton, when Red Hook included Cobble Hill and Carroll Gardens up to Brooklyn Heights, places the mouth to hell in Brooklyn, surrounded by a swarm of occult-worshiping immigrants. 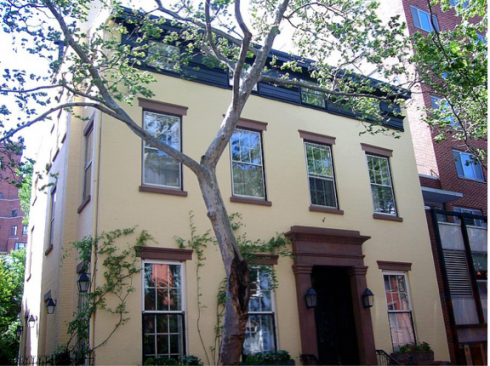 Truman Capote’s House on the Heights: 70 Willow Street
“I love Brooklyn Heights, it’s the only place to live in New York, “ Truman Capote told a reporter with the Brooklyn Heights Press in 1957. And the only place the indulgent socialite would want to live in Brooklyn. In a 1957 travel story for Holiday he called the borough “a veritable veldt of tawdriness where even the noms de quartiers aggravate: Flatbush and Flushing Avenue, Bushwick, Brownsville, Red Hook.” Yet he found something to love at 70 Willow Street, a yellow brick, Greek Revival structure with a winding staircase and a wide porch, not unlike a home the Louisiana-born Capote might have remembered from the South, just steps from the grand esplanade where he liked to stroll. 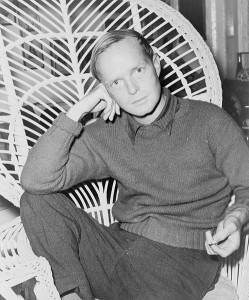 The home was owned by his friend Oliver Smith, the celebrated theatrical designer, and Capote moved into the basement apartment in 1955, staying until 1965. This was after the era of cheap rent had passed, but Capote claimed that he got Oliver Smith drunk on martinis to persuade the designer to let him occupy a few of the residence’s 18 rooms. From 70 Willow he wrote two of his most famous works, Breakfast at Tiffany’s and In Cold Blood, while surrounded by butterfly-shaped mirrors, rich green wallpaper and ceramic cats. The home at 70 Willow Street was recently listed  for $14 million, so unless the ultimate buyer is a sympathetic patron of the arts, its days as a home to poor writers are officially over.

Leave a Reply to Judy McGuire