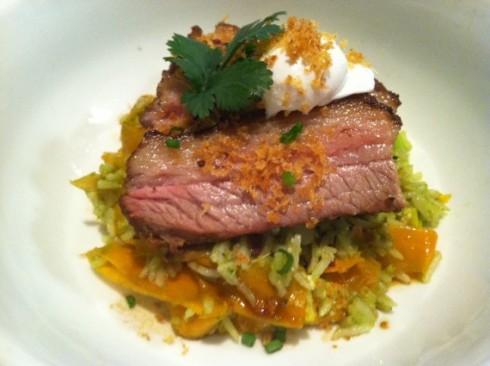 Despite occupying one of the most enviable corners in Brooklyn (N. 11th and Bedford), Williamsburg’s The Bedford has mostly flown under the radar since opening in late 2010. While no one has much bad to say about this restaurant, the consensus seems to be that it ticks off all of the nouveau Brooklyn boxes, but doesn’t really do anything to set itself above all the other rustic-wood-paneled spots in the ‘hood.

“I am not saying this place is bad,” writes Connie C. on Yelp. “But for the money and the type of cuisine, there are most definitely some better choices in the area.” Seconds Yelp-er Zach S: “Places like the Bedford are a dime-a-dozen in 2011’s Bedford Avenue Williamsburg. Places like Dressler on the South side blow it out of the water.”

For the most part, I think those critiques are fair. The Bedford’s menu has all the New Brooklyn necessities–kale salad, beets, truffled mac and cheese, etc. But none of them really kill it. With so many creative options in the area, this one doesn’t really stand out. So I was glad to hear that The Bedford has recently brought on a new chef, Jason Michael Giordano, formerly of Hotel Griffou in Manhattan, who promises to kick things up a notch.

Rather than release the new menu with a bang, Chef Giordano is rolling out new items gradually, introducing them as specials and then adding successful ones to the menu permanently. On a dinner visit last week, I found his specials leagues more exciting than the previous menu, thanks to some ballsy, far-out ingredient pairings. A tender, smoked beef brisket (above) is served over green curry fried rice, with scallions and crispy little bits of fried ginger sprinkled over top and a tiny poached quail egg providing just enough yolk to rich up the dish without completely soaking it in yellow. Grilled scallops come over Brussels sprouts that have been cooked in a savory lemongrass broth, the whole thing topped with a savory cauliflower puree, and again, those crispy fried ginger bits, which as far as I’m concerned can be put on top of any dish anywhere. Both dishes were extremely tasty, and not redolent of anything I’ve eaten elsewhere.

While the menu is still a work in progress, The Bedford promises new creative offerings soon, utilizing springtime greenmarket ingredients, plus foodstuffs from neighborhood purveyors like Acme Smoked Fish Corporation, Meat Hook and Mast Brothers Chocolate. Considering the prime location and beautiful dining room, The Bedford rightfully should be a neighborhood favorite, so it’s exciting to see things headed in the right direction.