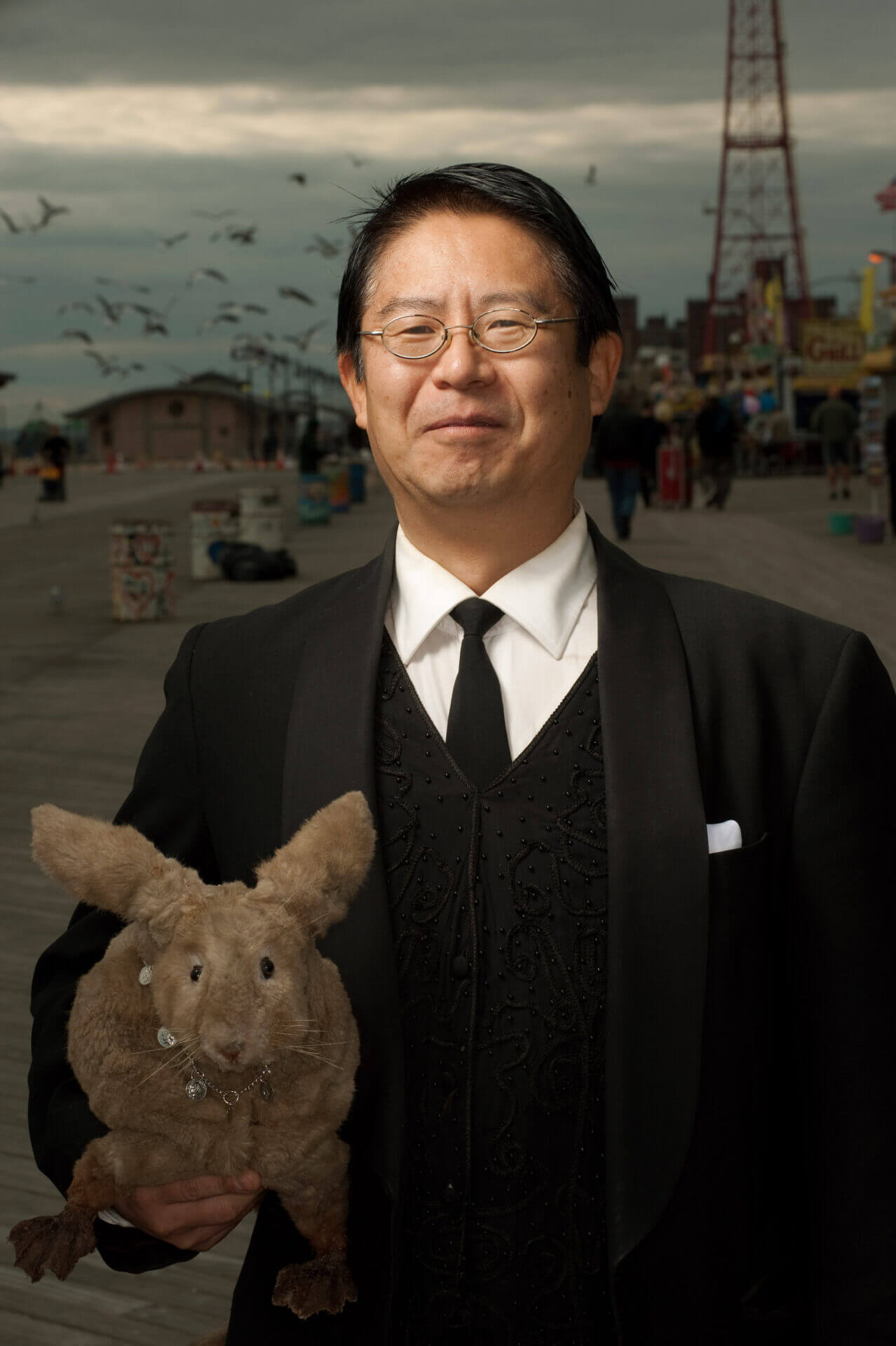 “Her name is Joann—she lives on the boardwalk. She said she didn’t want to be out there and was working on finding a place to stay. She told me she had been clean for two years and was getting her life back together, to get off the boardwalk.”

“This gentleman is Takeshi Yamada. Of course why he caught my eye was that rabbit under his arm. It’s not real. That rabbit is actually a replica of a sea rabbit.” [A creature that appears to be as fake as Yamada’s rabbit.] “He’s very well known in Coney Island. I think he won an award for taxidermy. There’s a lot of stuff online about him walking around with that rabbit.”

“He’s [part of] a group of people who live beneath the boardwalk. Most are from the Midwest, or California. I was told by a few of them that Coney Island was one of few places where the police wouldn’t harass you. He wouldn’t tell me his name.”

“Sharky is his name, he also lives on the boardwalk, and is homeless. He and Harry are good friends. He said, I’m gonna show you a trick and he put the cigarette in his mouth the wrong way and had smoke come out of his ears.”

“This was a sandstorm in January. It was 16 degrees on Boardwalk that day and I was shooting film. I was only able to stay out there for 23 minutes, it was so cold. I’d never seen something like that before.”

“I ran into him by Nathan’s, where they had a huge American flag on the wall. He was begging for money and I asked him about his situation. He didn’t look homeless to me. He told me he fought in Vietnam. He lives in a senior home off the boardwalk, and he said they basically take his money.”

“This man was deaf, I didn’t get his name. He was a very nice man. I still see him when I go out.”

“This gentleman was a lawyer—he was on the boardwalk with his wife and I saw him with the cotton candy. It was just a color thing.”

“This woman works in a community garden right off the boardwalk. She has a lot there at the garden and raises rabbits there. A lot of people don’t realize that Coney Island was once full of rabbits—that’s why they named it Coney Island. Coney is actually Dutch for rabbit.”

“She’s young, around 16. She said she’d been coming out there since she was 9 or 10. The main reason I started going out to shoot on the boardwalk was because when I was a child, it was forbidden, it was a hotbed for crime. So as I got older, I just had this curiosity about the boardwalk. But from her knowledge—she doesn’t have any knowledge of it being bad.”

“His name is Harry and he lives on the boardwalk. He’s homeless and he fishes out there, sometimes for food, sometimes to sell it.”

“His first name is my last name, Morris. He told me he was 92 years old. He fought in World War II and had been in Coney Island since he was 22.”

Brooklyn native Nigel Morris spent a lot of time at Coney Island as a child. In the summer, his parents regularly took him and his two siblings to play on the beach and enjoy the amusement park. They were quintessential outings with one exception: “We were forbidden from the boardwalk,” Morris says. “In the 80s, the boardwalk was crime ridden, for lack of a better term–a lot of crime, a lot of drugs, people were meeting below the boardwalk to do unspeakable things. We couldn’t go near it.” As is often the case when you place a taboo on something, Morris, now 34 and a photographer living in Crown Heights, developed a curiosity about the once off-limits boardwalk, which is evident by his latest project, “Coney Island: Faces of the Boardwalk.”

“I wanted to see if it’d changed,” Morris says. “I heard it’d changed, but I wanted to see for myself.” So he began taking weekly trips to Coney Island over two years ago, digital camera in hand, and spent hours walking up and down it. The result is a collection of candid portraits that capture a side of Coney Island that caught even Morris by surprise. “There’s a lot of different people out there from different backgrounds,” he says. “I was very surprised by how diverse it is. I’ve met doctors, lawyers. I’ve actually met a group of people who still live under the boardwalk.” The stories Morris shared surprised us, too, particularly the one about the doctor and his sea rabbit.