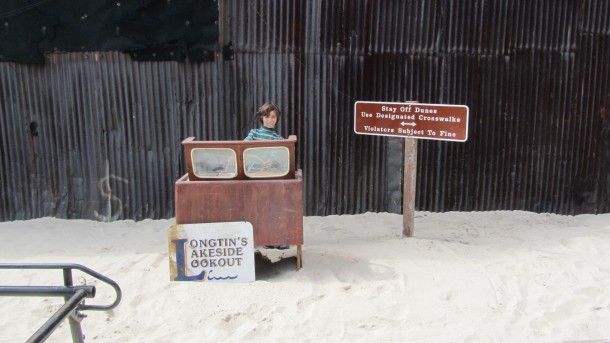 Brooklyn Crab's got it all: Seafood, views, and fun stuff for your kids to do

If you don’t live in Red Hook, and you don’t have a car, chances are you haven’t spent much time in the neighborhood over the winter, especially with Smith and 9th subway station closed for renovations. Now that the weather is nicer it’s time to brave the journey to Brooklyn’s working (and playing) waterfront.

While every second of the opening of Pok Pok on Columbia Street has been breathlessly reported, there a few other, less buzzed about new developments in Red Hook and the Columbia Street Waterfront that are worth the bike ride, the walk from the Carroll Street stop on the G/F, or the trip on the B-61/B-62.

Botanica is set to re-open late next week with a star chef at its helm: Saul Bolton, of Saul, The Vanderbilt, and (this fall) Red Gravy fame. The collaboration was pure serendipity and happened overnight. Bolton loves Red Hook, and Botanica, and knocked on the doors one day after a Fairway run in March, struck up a conversation with owner Daniel Preston, and found himself a new place to experiment. He conceptualized the menu, which will be a riff on Dominican food with some Italian and Spanish influences, or what he calls, “Meta-Caribbeana.” (The fare is also a reflection of Preston’s heritage–his father is Dominican–and the cocoa beans used at his distillery and chocolate factory, Cacao Prieto, next door, all come from his family farm in the Dominican Republic.)

Botanica will still be a bar, first and foremost, with a creative cocktail menu headed up by Dan Carlson of Saul and Jesse Casson and small plates like conch ceviche, spicy braised oxtail, yani queques (a play on Johnny Cakes), and pernil, prepared by former Vanderbilt chef Ryan McLaughlin.

The owners of Jalopy have opened a new bar called Jalopy Tavern in the space that used to be Moonshine. “I spent a lot of time at Moonshine and it was a real gathering place for the neighborhood, a real family place” says Lynette Wiley, one of the owners. “It was for sale for several years and we’re really excited to be able to open the space again as a bar for the neighborhood.” Jalopy Tavern has been quietly open since mid-March and the bar has a spacious backyard, 16 beers on tap including Sixpoint and Brooklyn Brewery as well as $3 Yuenglings every day.

While the main music venue will still be next door at Jalopy, Wiley says that they are looking for a country band for weekends at the bar. And, they’ll soon start serving dinner and lunch on weekends at the Tavern as well. “The idea is Mom’s Home Cooking,” says Wiley. They’ll have sandwiches, salads, bar snacks and “one supper item each night.” Wiley mentioned that they’ve tested out oxtails, spaghetti and meatballs, and a delicious gumbo so far, and that food will be available as soon as they get one last permit in place. Jalopy Tavern, 317 Columbia Street 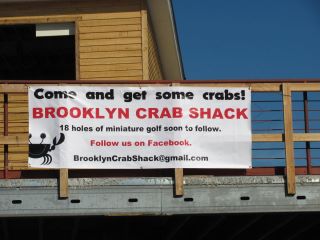 Brooklyn Crab, the gigantic crab shack that’s been under construction across from Fairway all winter, is on track to open this summer, perhaps by June. One of the owners, Rachel London, reports that it will be a “very traditional crab shack menu–no huge surprises” and that “it will be super fresh and tasty.” The restaurant has two decks overlooking New York Harbor and in case you’ve got a fiddle foot and get bored by the view, there will also be mini golf and bocce ball plus ping pong tables and shuffleboard underneath the shack. Brooklyn parents (and the child allergic, too, we suppose) take note, London mentioned that all of the owners have set out to make Brooklyn Crab a family joint. “All of us are friends with small children,” she told us. So plan on a “very family friendly environment.” Also, they’re hiring–check out the craiglist ad here. Brooklyn Crab, 24 Reed Street

There’s actually one more thing you should know about Red Hook. Our next immersion with Brooklyn Brewery is happening there next Saturday, May 12. More details on that tomorrow…