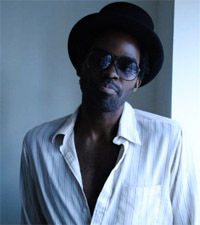 Emanuel Gibson is a blues-rock musician making his rounds through North Brooklyn music venues like Knitting Factory–where I first caught his set. I’ve seen him off stage, too, typically wearing a top hat just like he is here. Whether he’s on stage or off, Emanuel is rarely without his guitar and a story to tell, which is why I decided to ask him: What’d You Do This Weekend? Turns out awkward sexual tensions and sporting events took up much of his time.

FRIDAY: I got up early, 6:30am, and worked out before a meeting with The Network Journal at 9am about an article I wrote on African American businesses. Afterward, I went home and took a nap. In the evening, I got up and grubbed at Madiba then went to Deutsche Bank to meet a friend to go watch the game. Around 8pm I started getting wasted at Caliente Cab and had two orders of tacos ( four tacos to each order). My boy left around 8:15 and another one of his friends he brought along who works in human resources stayed with me. He’s mad lame, but cool at the same time. I told him I am contemplating going back to Corp. America. He started asking me if I had a girlfriend, and I told him yeah. He asked me mad more personal questions and tried to persuade me to stop talking to her and he doesn’t even know her.  He then tells me how he was married and how he will never get married again. Then I asked him why, and he said he’s not really into women, and I asked him:”Then what are you into?” He said he was “bi” but then he says he’s gay. So I told him I had to go. I felt like he tried to pull the wool over my eyes and deceive me due to the context of the conversation we had. I won’t go in depth.

I headed back to Brooklyn to Mo’s to get more wasted on Blue Moon with Grand Marnier and watched the Hawks vs. Celtics game. At around 11:30, I went back to Madiba and met a chick named Velta. She witnessed to me about the Lord and gave me her own personal story even though I grew up in the church. I secretly think she wanted to bang me. (I was mad drunk so there could be more or less to the story.) Velta’s 76. When I was walking home, I bumped into a guy whose girlfriend I used to have a crush on. I asked him how she was and he said they broke up. I told him I was sorry even though I’m not. I had to ask him her name again so I could look her up on Facebook, but she has such a common name I will never find her. She was a fucking fox!  I’m drunk. Walking home now.

SATURDAY: I woke up at 9:30, got out of bed and played some Beach Boys on my guitar. Then I went and worked out before heading home to shower and take a business call. Around 1:30, I went went to the Brooklyn Flea and then Smooch for a mango juice and a cookie. I realized I didn’t eat a real meal, so I started preparing to go get some real food at a place that I could watch the Mayweather vs. Cotto fight. I went home and took a nap first then went to Harlem to see Zoe, the girl I’m seeing. I came back to Brooklyn around 11 pm and called it an early night.

SUNDAY: I woke up and went to workout around 9 am then watched the NBA playoffs all day long and did dick.