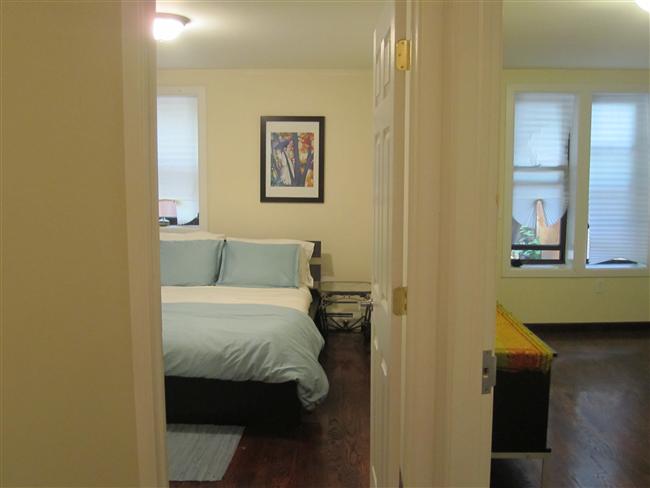 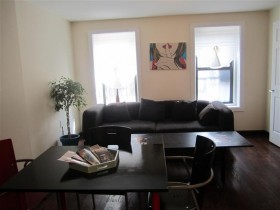 Appealing photos. like this one of one of the The Brooklyn Apartment(s), are half the amateur hotelier’s battle.

If you have a summer vacation planned, or travel dreams for later in the year, there’s a way to make your apartment earn its keep, even while you’re lounging on the beach, or hiking in the Rockies.

“Once it’s up and running, it’s easy money,” says Julian, who first joined the Airbnb community in February 2010 (and asked that his last name not be used). The income from managing several listings around Brooklyn, all of which are already booked for the summer, covers the rent on a two-bedroom Williamsburg apartment, and has helped fund his dream: restaurant-ownership. Beyond being available to exchange keys and tend to his guests, Airbnb allows Julian to spend his days as an entrepreneur and restauranteur.

Airbnb, which has been around since 2008, seems straightforward enough: Sign up for free, create a profile, list your apartment, and hope travelers will be enticed to pay to crash with you. But why would you want to open up your home to a stranger—and what would make them want to stay with you, when there are already more than 7,330 listings in Brooklyn alone (not to mention hundreds of legitimate hotels)?

Well, there are advantages, for both you and your potential guests. As Julian proves, it’s possible to make big bucks. Airbnb CEO Brian Chesky says making upwards of $21K is not uncommon for hosts in NYC. The site also provides more affordable accommodations and a more local perspective for travelers to the Big Apple.

Many Airbnb hoteliers start out a bit wary and then settle into a routine with guests. “I had some reservations about it at first,” says Corey Lugg, who’s rented her spare bedroom in Prospect Heights for about $79 a night since her roommate moved out a year ago. “But considering I was meeting potential roommates on Craigslist before I started doing this, I figured this way, at least if I get a total weirdo in the apartment, they’ll probably be gone in a week and then it’s on to the next set of guests.”

If you travel often, want to make a little extra cash, or just haven’t found the perfect, permanent, roommate with whom to share your space, Airbnbjust might be for you. It probably also helps if you’re open-minded, enjoy meeting new people, aren’t overly attached to every item in your apartment, and don’t squirm at the thought of a stranger sleeping in your spare room—or in your bed while you’re away. Here are a few guidelines for making the most of putting your apartment to work.

Follow Best Practices
Airbnb offers tons of advice about how to get started using the site; one tutorial explains that a great title, well-lit photos, and accurate, informative descriptions of the place and neighborhood are keys to success. The site also offers free, professional photography services—you can sign up to have a pro come snap photos of your space to create a more attractive listing—images will receive an “Airbnb.com Verified Photo” stamp, which helps add credibility to your place. 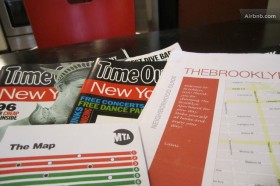 Consider charging a security deposit and a cleaning fee. Go check out other listings in your neighborhood; what’s the going rate for spaces like yours? Corey calculated the asking price for the second room in her Prospect Heights apartment by figuring out how much it would take to pay a roommate’s share of her rent if people were staying with her for 50% of the month. “That way if I had people in here the whole month, it would theoretically pay all of my rent,” she says. Currently, she’s pretty much booked solid all summer, and increases the nightly cost by just $10 for peak months and holidays.

Several Brooklynites suggest that when you’re just getting started on the site, it helps to offer your space for cheaper than other listings in your neighborhood to help attract first visitors; initial positive reviews can go a long way to help attract future guests.

There are a few different things you can do to help you gain credibility within the community. Airbnb’s search algorithm rewards hosts for having a completed profile, accepting a high percentage of requested reservations, accumulating positive reviews and friend recommendations, maintaining and updating your calendar frequently, quickly responding to messages and requests to stay, and linking your social networks to your profile.

Be Careful
Know that you can always decline a guest’s request to stay, for whatever reason. Lindsay, who asked to have her name changed so her landlord wouldn’t identify her, has rented her apartment in Williamsburg since July 2010 and says she declined a guest’s request to stay with her only once. “One guy said he is a performer who plays an insane clown and would need the bathroom for at least an hour to get ready,” she says. “I don’t want insane clown bathroom hogs around.”

Airbnb has some built-in safeguards—the newest of which is a host guarantee for property damage up to $50,000. You should also remove or lock up any valuables or irreplaceable items, and find out as much as possible from guests (i.e. the purpose of their travel, what they’re looking for by staying with you, if they’re traveling alone or in a group) before agreeing to host them. Make sure they’ve read and agree to any house rules you’ve listed on your profile to avoid surprises.

Know What You’re Getting Into, Legally Speaking
It’s important to know that in May 2011, a New York state law went into effect to ban short-term residential rentals for less than 30 days, to help crack down on “illegal hotels.” While the law was designed to target apartment owners who were using residential buildings as hotels, it has created somewhat of grey area when it comes to Airbnb.

Under the new law, if you’re renting out a spare room and are still staying in your apartment, no laws are being broken (assuming you’ve obtained written permission from your landlord to sublease and aren’t charging guests more than 10% more than what you’re paying in rent). But it is technically illegal if you’re vacating your space completely and are renting it out as a private apartment for 30 days or fewer. However, many Brooklynites continue to advertise private apartments on Airbnb, often without the landlord’s knowledge or a clear understanding of the law. For many that makes renting a “hush, hush,” under-the-radar sort of operation, which is why nearly everyone interviewed for this story asked that we omit their last name or change their name completely.

“You have to be smart,” says Julian. He now rents and maintains four separate apartments throughout Brooklyn, three of which he uses exclusively to host Airbnb travelers. “I tell guests to keep their heads down and not make too much noise. You want to avoid 311 complaints—if you get a handful you might have a problem. But at this point the city can’t do much about it—they would have to set up a whole new department for dealing with this kind of stuff.”

It’s true that law enforcement currently only responds to complaints; assuming landlords or neighbors aren’t annoyed or bothered by what you do with your apartment. In this City Room post, Senator Liz Krueger, one of the sponsors of the bill that makes short-term sublets illegal, says that “The city is not going to knock on doors.”

So, get permission or tread lightly. Julian relayed the story of a friend who wasn’t allowed to renew her lease after her management company found out she was subleasing her apartment through Airbnb without their approval. “You probably don’t want to rent your apartment in an area where people have been living for years,” he says. “It’s better when people are coming and going—so neighborhoods like Bushwick or the NYU area make it easier to keep a low profile.”

Other Airbnb-ers are more sanguine about the legal issues. “Typically the guests are more polite and considerate than a roommate would be, so no one even seems to notice what’s going on,” Corey says. “Until my landlord comes to me with concerns that I’m running a brothel or homeless shelter, I’m not going to worry about it.” 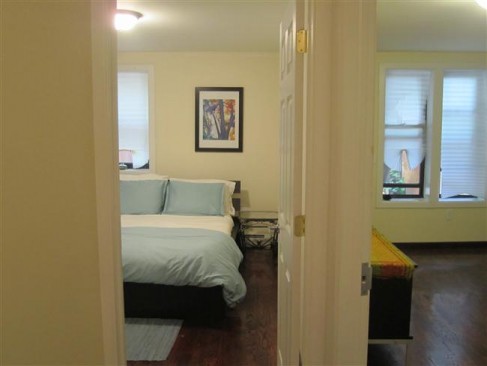 Pay Your Taxes
Be aware that at the end of the year, Airbnb issues federal tax forms to file all of this income. However, in New York, it is your responsibility to collect any local or state taxes. “Don’t declare it at your own risk,” Julian says. “If you get audited you’d probably get royally shafted.”

Liani Greaves, who owns several properties in Bed-Stuy which she rents individually as The Brooklyn Apartment(s), both through Airbnb and through her own site, suggests enlisting help from HotSpot Tax to ensure compliance on state and local taxes.

Reap the Rewards
Beyond monetary rewards, many Brooklynites look at the site as a way to break up their routines and introduce eager visitors to their favorite neighborhood places. Lindsay says she initially signed up for Airbnb to make extra money in order to do the low-paying job that she loves. But the added perks over the years include making a short dance film with a French filmmaker who stayed with her, and writing an original song with an Austrian musician.

Perhaps the best advice is to make sure that as an Airbnb host, you’re offering a positive experience for your guests, and aren’t just in it to make money. “Go the extra step,” Julian says. “Leave a six-pack of beer in the fridge for guests. It doesn’t cost much, but it makes people happy.”