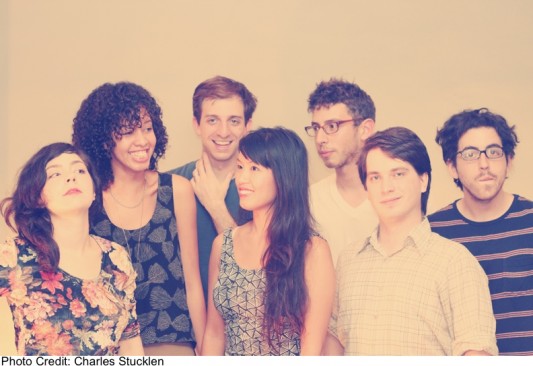 In terms of sound and configuration, Ava Luna is not like any other group. They  defy rock and roll standards. Imagine 70s and early 80s R&B music with punk and avant-garde experimentation–that could somewhat describe what their fascinating music is like. And as far as the band itself, it’s a rather unusual line-up consisting of three instrumentalists and three singers. As Ava Luna singer/guitarist/keyboardist Carlos Hernandez tells me, the very make-up of the band started out as an experiment.

“I thought, ‘Wouldn’t it be cool–starting with the [earlier] record Third Avenue Island–to strip away everything and start it from absolute scratch?’ The only sounds that you heard instead of a guitar or whatever were just vocal harmonies. It was kind of like a challenge, an experiment: Can we make a compelling record using only these tools? And then of course, the singers were in the band at that point. I thought,’We might as well stick with it, it’s fun, and these people are amazing.’ We have stuck with it ever since.”

The singers’ vocal harmonies, led by Carlos’ crooning, is a integral part of Ava Luna’s most recent album, Ice Level (Infinite Best). Although the band—which consists of Carlos, keyboardist Nathan Tompkins, bassist Ethan Bassford, drummer Julian Fader, and singers/keyboardists Felicia Douglass and Becca Kauffman–has recorded in the past, Ice Level marks their first album released through a label. While they haven’t reached the mainstream yet, Ava Luna has accomplished much in their two-and-a-half years together as this lineup with touring  and getting mentions in The Village Voice  (Christopher Weingarten wrote: “Brooklyn’s Ava Luna is the rare band that needs to be heard to be believed”) and NPR. On Friday, they’ll be performing at Brooklyn’s Free Candy as part of the Hillstock festival.

Carlos, who grew up in Bensonhurst and lived in Park Slope before settling now in Crown Heights, tells me that he started Ava Luna as far back as high school. “And not until I was in college that I started playing with other people and assembled a band,” he says. “When I was in college, I met Nathan and Julian, who are still in the band today. And then after college, my old friends from high school returned home to New York and they were available. I was like, ‘Do you want to join our band?’ That’s basically how it went.”

When I asked Carlos about the soul music-meets-avant-garde hybrid sound on Ice Level, and he replied that soul component was a part of his childhood growing up. “The motivation definitely comes from more avant garde-stuff, apart from my old favorites like from being a kid, he explains. “Most of my music that I enjoyed being made right now is definitely on the more abrasive and avant garde and strange and weird side of things.”

The album’s first single, “Wrenning Day,” is a song that was the initial track the band started recording for the record, Carlos says. “We worked on it for a long time and it underwent a lot of changes. I think was inspired by Timbaland [and] Aaliyah, you know, that kind of specific beat–it’s like fast hits but it’s really slow pulse. That’s a simple enough idea but of course the song kind of blew up into this behemoth.”

As for Ice Level, Carlos says that it was the album that he exactly wanted to make, but now he wants to work on something new, perhaps something more easily graspable.

“The real challenge is to make it make sense for other people, to get it across,” he says. “That’s something that we’ve always had a lot of difficulty with. A lot of people have actually said they’ve been completely baffled by this record–they don’t know what’s happening. I did want to do the experimental and avant garde, but I certainly didn’t want to put anyone off.  The only goal for the next thing is to just get better and what I mean by better is to be clearer. It’s almost like a language barrier thing. If English is your second language, then the way to get better at it is to practice. It’s not like your message isn’t getting across–over time it will get less stilted if you work at it.”