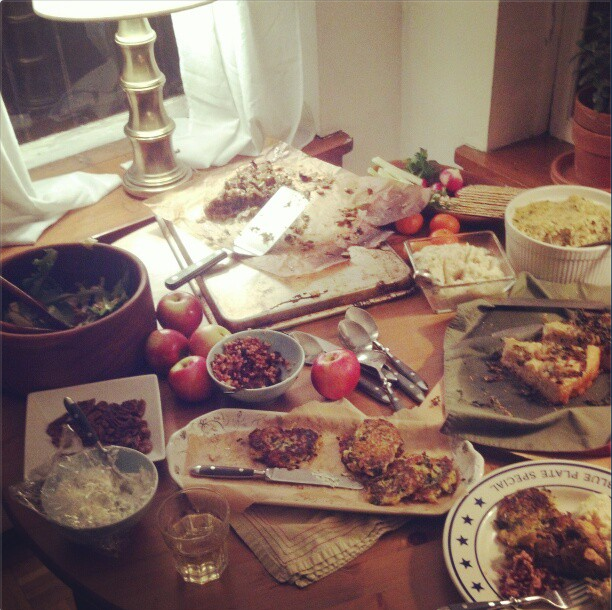 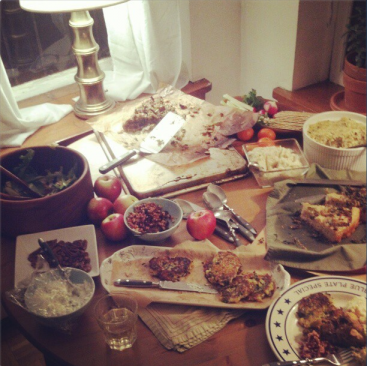 Though the holiday season generally isn’t really known for being super-vegetarian-friendly, it’s Thanksgiving whose very own nickname hearkens to the essential nature of meat to the feast. So how can Turkey Day become a meal fit for a vegetarian king without resorting to Tofurkey?

This year, Lukas Volger, author of Veggie Burgers Every Which Way and Vegetarian Entrees That Won’t Leave You Hungry, set out to revitalize the tired vegetarian tradition of nibbling around the turkey. He spent some time crafting recipes, and then invited some friends over (including yours truly) for a veggie Thanksgiving in his Fort Greene studio apartment.

“Thanksgiving—or any big celebration meal—should be about making everyone feel welcome and represented at the table. Those doing the cooking want everyone to EAT, and I understand if it feels like a wrench thrown into the wheel when suddenly there’s someone who’s got dietary restrictions,” Volger said. Accordingly, Volger laid out a veggie-friendly feast of kale and caramelized onion focaccia, quinoa and celery root gratin, and a mind-blowingly delicious pumpkin sherbet with gingersnap-pecan crumble, among other dishes, accompanied by lots of red and white wine.

Conversation ranged from the results of the election a few days before (marijuana legalization and Obama’s reelection both popular topics) to obscene band names, and one couple even brought by their two incredibly well-trained dogs to do tricks. It was one of those cozy, perfectly-soundtracked evenings where everyone seemed witty and cool (perhaps fuelled by all the wine), and the food was, in a word, amazing.

Despite taking place a few weeks before Thanksgiving, it fulfilled one of Volger’s favorite traditions: “to be in good company and eat good food.” To help others recreate this kind of evening for their own Thanksgivings, Volger has released his Thanksgiving recipes as a free e-bookavailable on his website, saying that he’s “hoping to help cooks make the vegetarians feel welcome.” He also shared a recipe for one of the dishes from the e-book, a Brussels Sprouts and Roasted Chestnut Galette, below.

Not all Thanksgiving dinners can be as low-key as ones filled with friends rather than family, so we asked Volger for his advice on how to get through holiday stress. “Do whatever you have to do in order to relax and enjoy it. If things get harried, take a break: go for a walk, pour yourself a drink, meditate, play solitaire, watch an old ‘Real Housewives’ episode. It’s easy to want everything to be perfect, but resist falling into that trap. It’ll be what it’ll be. Unless you’re a fairly confident cook, I wouldn’t try a brand new dish for Thanksgiving without giving it a test run at some point first, but other than that, just try to have fun. Don’t be afraid to enlist the help of others.”

We’ve got more advice on preparing a feast for your friends here. And if you need a veggie detox after Thanksgiving, Volger will be appearing at 61 Local on Tuesday, November 27th, to cook up some veggie burgers and sign copies of his books. 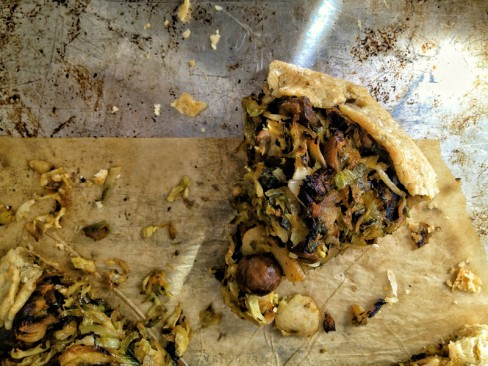 Brussels Sprouts and Roasted Chestnut Galette
This festive, vegetarian centerpiece dish fits right into the Thanksgiving landscape. It’s
got the seasonal vegetables, late autumn colors, a familiar flavor profile—and it’s rich
and decadent, a perfect foil for all the traditional adornments like cranberry relish
and gravy. Steps can be broken up—the crust and the filling can be made separately,
both ahead of time—and you can even assemble the galette a few hours in
advance. Look for roasted chestunts that are sold in jars or vacuum sealed pouches.–L.V.
Pastry
1-1/2 cups all-purpose flour
1/2 cup whole-wheat, spelt, or
rye flour
1/2 teaspoon kosher salt
12 tablespoons cold butter, cut
into 1/2-inch cubes
4 to 6 tablespoons ice water
Filling
5 cups Brussels sprouts, trimmed
and cleaned 2 tablespoons
olive oil
1 medium onion, cut into
1/4-inch-thick strips
2 garlic cloves, sliced thinly
1/2 teaspoon kosher salt
1 cup roughly chopped roasted
chestnuts
1/2 cup crème fraiche
1 tablespoon Dijon mustard
1/4 teaspoon pepper
1 tablespoon melted butter
To make the pastry, combine the flours and salt in a food processor and pulse to combine. Add half the butter and pulse a few times until well combined, then add the remaining butter. Continue pulsing until there are pea-sized bits throughout. Add 3 tablespoons water, pulse a few times to combine. Add more water by the tablespoon, pulsing as needed, until the dough is uniformly moist and just begins to look like it wants to cohere. Grab a small amount with your hand: if it holds its shape easily and doesn’t crumble, you’re set. If not, pulse in a bit more water.
Spread out a sheet of plastic wrap on a work surface and dump the dough onto it. Gather up the corners of the wrap and gently nudge the dough into the center, then shape it into a
disc. Wrap tightly and refrigerate for at least 20 minutes and up to 1 day.
To prepare the filling, slice the sprouts thinly by passing them through the slicer disc of the food processor.
Heat the olive oil over medium heat in a wide skillet and cook, stirring occasionally, until the onions are tender and begin to caramelize—15 to 20 minutes. Stir in the garlic, the sprouts, and the salt. Cook without disrupting in increments of 3 or 4 minutes—the goal is that some of sprouts develop brown spots and begin to char—for 10 to 15 minutes, until the sprouts are tender. Remove from the heat. Stir in the chestnuts, crème fraiche, mustard, and pepper. Taste for seasoning. Allow to cool.
Preheat the oven to 400° F.
Unwrap the dough, dust it lightly with all-purpose flour, and place it between two sheets of parchment paper. Roll it out, starting from the center of the disc and rotating it 90 degrees after each roll, to a thickness of about 1/8-inch and a diameter of about 15 inches. Remove the top piece of parchment (wipe it off, save it, and reuse it for something else), then slide the crust and the parchment it’s attached to onto an unrimmed or overturned baking sheet. Pile the filling in the center, leaving a 2- to 3-inch perimeter. Gently flatten the filling to an even thickness, then fold the crust around the filling, pleating it as needed. If the dough sticks to the parchment, use a dough scraper or chef’s knife that’s been lightly dusted with flour to slip underneath it. Store in the refrigerator until ready to bake, for up to 4 hours.
Just before baking, brush the crust with the melted butter, then bake for 25 to 35 minutes, until the crust is golden brown. Serve warm.
Yield: 1 galette, to serve 6 to 8
To make in advance: The galette can assembed up to 4 hours in advance. The crust and filling can each be made up to 1 day in advance.