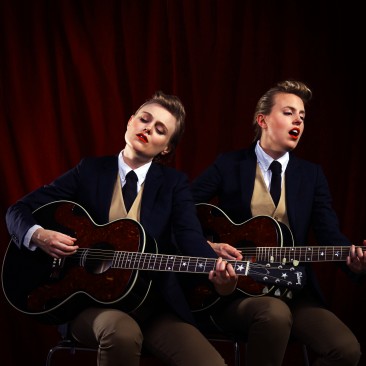 Fans of the  Chapin Sisters’ folk-inspired melodies and distinctively lush harmony singing will find it absolutely fitting that their upcoming album draws on the music of another sibling act known for their harmonies—the legendary Everly Brothers. On A Date with the Everly Brothers, due out sometime in March, the Chapins cover such classics as “All I Have to Do Is Dream,” “Cathy’s Clown,” “Love Hurts,” and “When Will I Be Loved.”

Abigail Chapin and her sister Lily listened to Don and Phil Everly’s music on the New York oldies radio station WCBS 101.1 FM when they were growing up in the city. “We knew all those songs really well,” Abgail told me, “Like the hits that still get played or at least still got played in the 90s when we were in grade school. So many of the songs you end up knowing–Gram Parsons did a bunch of them. There were so many covers of them that were hits or at least to a certain extent hits. Most of the songs that we ended up doing, I knew some version of. But not all of them—there’s a couple that I’ve never heard before at all. One of my favorite songs from the album is called “Sleepless Nights”–it’s totally haunting and beautiful.”

If the name Chapin sounds familiar, it’s because Abigail and Lily come from a very famous musical family. Their father is folk singer Tom Chapin and their uncle is the late Harry Chapin, best known for the hits “Cat’s in the Cradle” and “Taxi.” Recently relocating back to New York after living in Los Angeles, Abigail and Lily began a Thursday residency at Pete’s Candy Store last week that will run through the end of the month.

“We were mostly doing all songs that we haven’t played before ever live,” Abigail said about their first performance at Pete’s last week, “so they’re old country songs–a lot of Louvin Brothers, Everly Brothers, Skeeter Davis. They’re songs that we learned expressly for that, which is always a little nerve-wracking, but it was really a lot of fun.” 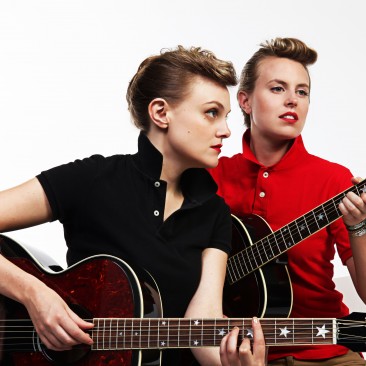 According to Abigail, the idea behind the Everly Brothers covers album began when Lily visited their family compound in New Jersey where Abigail was staying to take care of their grandmother. “We were having breakfast and we were listening to the Everly Brothers,” Abigail recalled, “and we were just singing along and it was really fun. We wanted to learn more and more songs.”

For the new record, Abigail and Lily picked songs that drew from some of the most popular hits by the Everlys as well as songs that may not be well known to casual listeners. “The thing is they were all singles” said Abigail. “Even if you haven’t heard of the Everly Brothers version, they were hits for other people. So it’s actually kind of hard to find songs that nobody knows.”

The album was recorded in Greenpoint under the musical direction of Evan Taylor, a friend they knew from Los Angeles. The sound definitely evokes the feel of classic Everly Brothers songs, and remarkably for an album with such high production values, A Date with the Everly Brothers was recorded in a matter of six hours. “A lot of them were the first take,” says Abigail, “but we recorded maybe three takes, we recorded three or four takes at the most of any song but a couple of them were recorded [in] one take.”

Not only did Abigail and Lily faithfully record their interpretations of those songs, but they even dressed up like Don and Phil for photo shoots related to the record. The idea, according to Abigail, was inspired by the cover art from an old Everly Brothers album. “They were extremely influential,” she says, “in a really short time…from the Beatles to all the harmony groups–Crosby Stills and Nash, but also Simon and Garfunkel,” she said.

Abigail and Lily were once a trio act with their other sister Jessica and together recorded their debut Lake Bottom LP. When Jessica left the group, Abigail and Lily made their next album, Two. In explaining why she and Lily decided to move back to New York, Abigail says it was just time: “[Lily] had some life changes that prompted her move. So we were apart for six months. I figured it was time for me to come back too. We’d move to L.A. really specifically for our band and kept thinking we were gonna be moving back in the next month or something, and L.A. was a great place to live. It nurtured our music and had so many musical connections there. Our parents are here and this where we’re from.”

I asked Abigail what’s next after the residency at Pete’s, and she says: “I think we’re really excited to work on new songs, write a new record also. I’m not sure. It just depends. I would like to tour a little bit. We’ll see. Right now we’re learning a ton of songs and we’re really focused on that.”