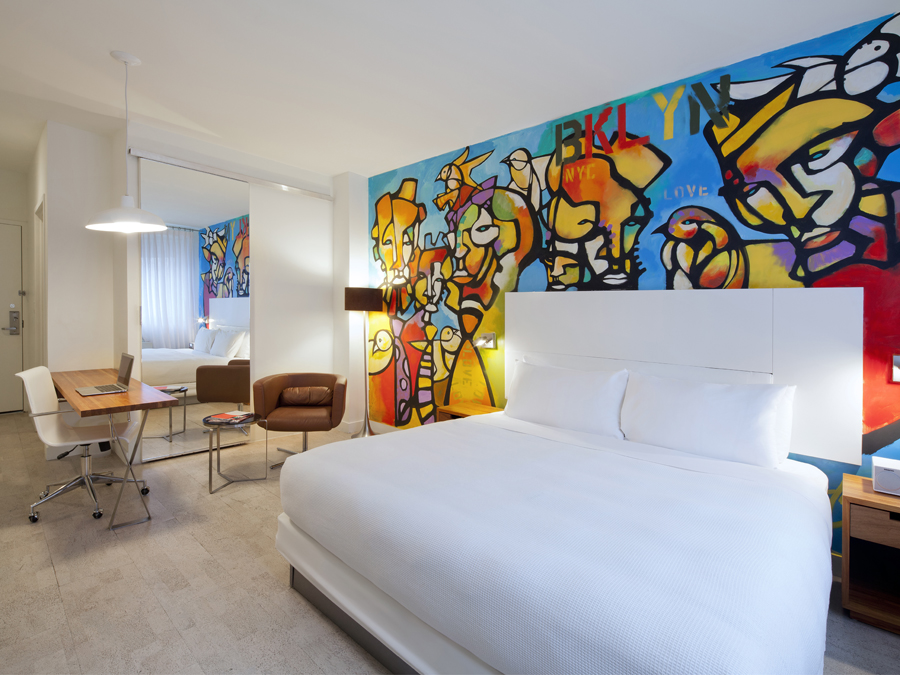 Hotel lobbies aren’t typically the domain of art openings, but last week the Nu Hotel’s lobby played host for the opening of Nu Perspectives, a collaborative project between the hotel and six Brooklyn artists invited to create murals on the walls of five of the hotel’s biggest guest rooms.

“It really is a way for us to provide our guests with a totally unique experience of Brooklyn, and a way for the artists to reach an audience that they might otherwise not reach,” Jennifer Goodman, a sales manager at Nu Hotel who organized the project, wrote in an email to BB.

Goodman got the idea for Nu Perspectives after talking to street artist Craig Anthony Miller, who is known by CAM, his initials. Miller’s work adorns walls and buildings around Brooklyn, primarily in Dumbo–like his is Aztec inspired mural outside Pedro’s on Jay Street.

After getting the green light from Javier Egipciaco, Nu Hotel’s general manager, Miller and fellow artists Magdalena Marcenaro, Icy and Sot and Adam Suerte, as well as Steven Weinberg,  our own illustrator-in-residence, set to work covering the pristine white walls of five guest rooms with their artwork. 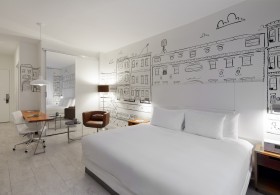 Weinberg kept things black and white with his offering, a Park Slope streetscape of brownstones and pre-war buildings authentic enough to make you feel, for a moment, like you were in the posh neighborhood a few streets away, minus the bevy of Bugaboo strollers.

“That’s where I live, and my studio is on the third floor of a brownstone, so I look out on that every day,” he says. “It’s what I know best of Brooklyn.”

Weinberg’s work is next door to Suerte’s who chose to recreate the Brooklyn Bridge, Manhattan Bridge and Williamsburgh Savings Bank Tower, as well as the skyline that surrounds them, in a subdued color palette of black, white, tan and light blue, a color combo Suerte says he works with often because he is color blind. 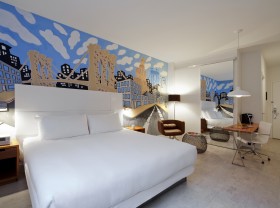 “They’re definitely three Brooklyn landmarks in the general vicinity that you can see in the neighborhood without paying any money” says Suerte, who owns Brooklyn Tattoo, across the street from the hotel. “I’ve done murals before but never one in a hotel room or one that was necessarily legal.”

The most daring of all the murals belongs to Marcenaro. Over two days the Argentinian artist, whose studio is in Gowanus, created not one but two murals with everything from spray paint to newspaper, including cutouts of Brooklyn Nets center Brook Lopez dunking over New York Knicks guard J.R. Smith. 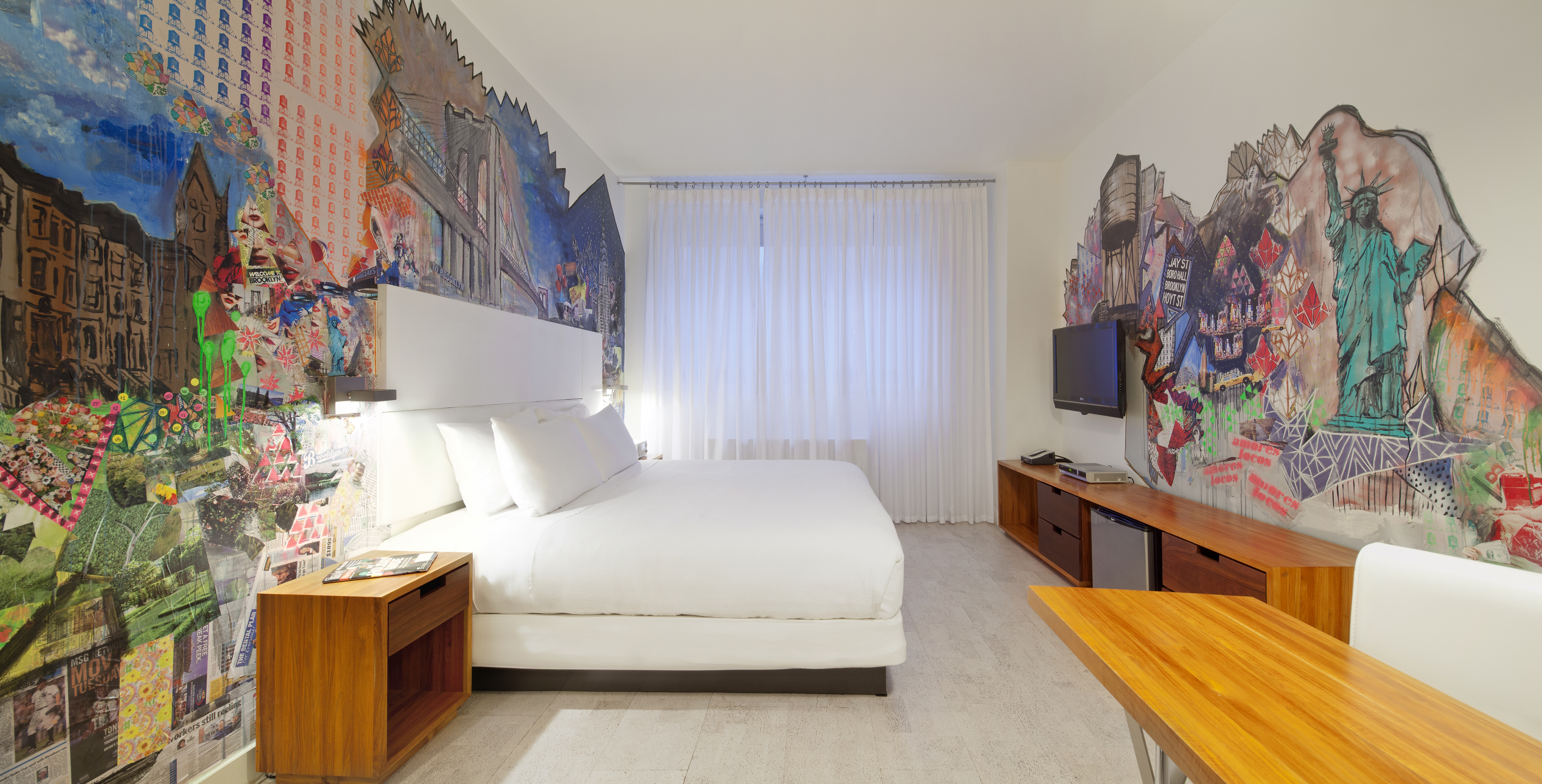 “Mixed media gives more texture and dimension to the work,” Marcenaro says. “I like collaging and creating small stories within a bigger story. There are little stories everywhere in my work, and I wanted to reflect a little bit of the energy of the city and what it means to me.”

Neither Miller, nor Icy and Sot were able to make the opening. In contrast to the other murals, neither of theirs depicted obvious Brooklyn iconography. Miller’s was a continuation of his signature style of bright, bold colors and abstract portraits. Icy and Sot (room 202) stenciled faces of children, floating out of a black nebulous of a background and staring at the bed from the opposite wall. The work itself is beautiful but is sure to scare the bijeezus out of someone on their way to the bathroom in the middle of the night.

Now that the opening is over, the only way to view the murals is by booking one of the five king-size rooms themselves. There’s no additional charge to stay in any of the rooms with the artwork, but the rate does vary by season–the average rate is around $219 says Goodman, but she encourages anyone interested in staying at the hotel to check out its website for the most accurate pricing.

“The murals will remain up until we need to remove them for some reason, renovation or whatever, but there is no plan to take them down,” according to Goodman. “Hopefully we will go the other direction and continue to add to the project as opportunities present themselves.”

A possible second installment is being discussed for next fall.