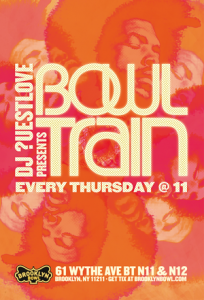 We’ve noted the abundance of live music to see around the city this summer, but what about DJ sets? In this column, we’ll explore some of Brooklyns’s best spots to get down. First, a little turntable history. According to Wikipedia, the first DJ’d dance party took place in England in 1943, when DJ Jimmy Savile played jazz records for a UK society party. These days, as I’m sure you know, DJ sets are everywhere, and the best DJs out there manage to take disparate tracks and blend them together to create a smooth body of sound.

Thursday nights belong to ?uestlove–at least at Brooklyn Bowl, where you’ll find swanky hipsters grooving, rubbing all up on each other and drinking Brooklyn booze at Bowl Train, the sultriest, most funkalicious weekly dance party Williamsburg has to offer.

?uestlove is the genius drummer of Grammy Award-winning hip hop, soul (neo soul!) band The Roots. You can find their music everywhere but can also see them in their brilliant glory on Late Night with Jimmy Fallon (or check them out at Prospect Park this summer). ?uestlove himself has drummed or produced for everyone from Christina Aguilera to Fiona Apple.

For his weekly residency ($8 at the door and $5 in advance), ?uestlove draws from a collection of 50,000 vinyl records to make you get down and all over your friends or loved-ones or whatever.

Though this week may be a strange scene, post $150-per-ticket Guns N’ Roses show, when I went last Thursday DJ ?uestlove took his post at 11pm, comb in fro and glasses on. Clusters of plaid-shirted men and shiny spandex-wearing women were already on the dance floor, ready for the first smooth reggae tune, which was followed by Carl Douglas’s “Kung Foo Fighting.” They cheered, of course, while screens played vintage clips of Soul Train. The whole thing felt a little like a middle school dance but cooler. Like a lot cooler.

Funk was definitely the theme of the evening, though iconic 70’s pop and old school R&B popped up on the regular. Songs moved from hits like The Gap Band’s “Outstanding” to the Jackson Five’s “I Want You Back” (dancers cheered in approval when that one came on). Midway through the set, ?uestlove busted classic James Brown and Chuck Brown’s “Bustin’ Loose.” Soul tunes like Maze’s “Before I Let Go” and Diana Ross’s “Upside Down” surfaced, too, and Kool & the Gang’s “Get Down On It” made an appearance. ?uestlove didn’t skimp on the contemporary, either, moving into rap and hip hop like the Ying Yang twins’ “Wait (the Whisper Song)” and Snoop Dog’s “Beautiful” (another throwback was Positive K’s “I Got a Man”).

He continued for several hours, capping off with more James Brown and slowing it down for a 2am finale, when crowds began to dwindle.

If you’re in the mood for a smooth and upbeat dance party, check out Bowl Train. Guaranteed, you’ll shake your arm, then use your form. Stay on the scene like a sex machine.