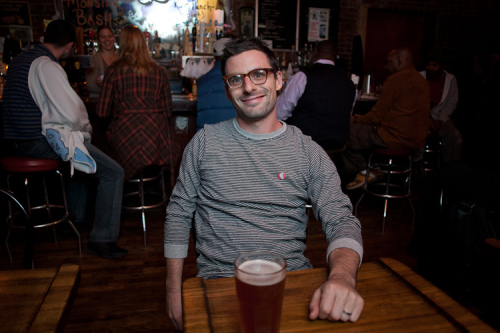 Get schooled by beer journalist Josh Bernstein at the release party for his new book, “The Complete Beer Guide,” at Brooklyn Brewery on Sep. 10. Photo by Sam Horine

I can throw back a cold beer with the best of them, but you’ve got the wrong girl if you want a nuanced description of the difference between a session and a saison. Luckily Brooklyn author and journalist Josh Bernstein has set out to demystify the confusing and ever-proliferating world of beer for ignoramuses like me in his new guide entitled The Complete Beer Course: Boot Camp for Beer Geeks. On Tuesday Brooklyn Brewery is throwing a release party where beer enthusiasts can get their hands on signed copies of the book and a pint, or several, of award-winning brews. Bar snacks in the form of beef rendang and chickpea and spinach sliders from Auria’s Malaysian Kitchen will be also available. A $30 ticket gets you three hours of unlimited beer and a copy of the book, but you can also go the cheap route and pay $15 for just the open bar. Tickets are likely to sell out fast, so be sure to grab some here before you get shut out.–KH