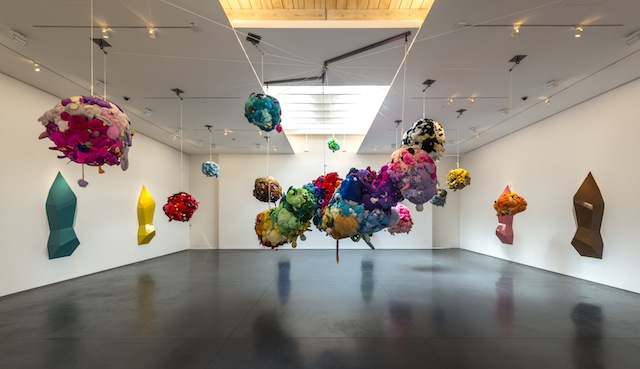 It may be surprising that one of the most engaging exhibits for kids (and adults) is the retrospective of Mike Kelley, an artist who committed suicide last year and is known for his album cover for Sonic Youth’s “Dirty.”  Immediately upon entering PS1, we noticed signs warning of the adult content in the show. Do not let this deter you. Press on, and you will be rewarded with a dense, magical show involving drawings, sculpture, and found objects. Yes, there will be some adult content, but these rooms are easily skippable, leaving lots of child friendly art to explore.

The world of Mike Kelley involves stuffed animals, optical illusions, superheroes, and school—themes that youth can understand. A series of animations that seemed to breathe, chuckle, sob, or scream introduced us to the show. Inside the first room was the awe-inspiring “Kandor” project, which Kelley worked on for almost a decade starting in 1999. My nearly 4-year-old son was too young to fully nerd out with his parents over the work inspired by Superman’s home planet, Krypton. But his jaw still hit the floor with these tiny, glowing cities set in handblown glass bottles, mesmerizing crystal sculptures, and mad-scientist accoutrements. My son’s mind was literally blown by the series of “magic pictures,” i.e. lenticular prints, in which the pictures change depending what direction you are looking at them.

On the second floor, crocheted blankets were a hit with my son, and a room covered with a sea of bumpy knitwork caused him to actually lie down on the floor to try and peek under the rug. The rooms of stuffed animals give off a creepy vibe, but that didn’t seem to bother my kid who enjoyed naming the animals, and was wowed by the colorful orbs of them hanging from the ceiling.

There are certain rooms that as a parent you may want to avoid, and some films that are borderline scary. A large sculpture that can be climbed into seems kid friendly, but has peepholes projecting the shower scenes from the movie Porky’s.  A wooden painted screen facing a back wall caused my son to wonder “what’s behind that fence?” So, we tiptoed behind to see magical blinking colors that shockingly cut to abrupt laughter. It scared all of us, and depending on the sensitivity of your child, you should be on the look out for these kinds of “surprises.”

But other works, like the miniature scale replicas of every school Mike Kelley ever attended, and portraits of Abraham Lincoln and other historical figures are very cool for youngsters. The “Alphabet and Bee Beard” line painting was another favorite of my son’s.  A “bearded” man had every letter of the alphabet hidden in the line drawing.  This really spoke to my pre-schooler, and he’s been working on his own versions since seeing the show. In the end, this show changed the way my son saw his world, and isn’t that what great art should do?  That, to me, was worth navigating around any adult material.

The exhibit is huge and viewers will get hungry. Luckily, PS1 is home to the wonderful M.Wells Dinette where, in the past, we’ve had fois gras oatmeal and broiled tomato eggs from a menu that changes daily. But this time, we wanted something a little less complex, so we headed to Sweetleaf coffee shop up the street, where Iced Rocket Fuels ($3.75) and Apple-Pumpkin muffins ($2.75) put the pep back in our step.