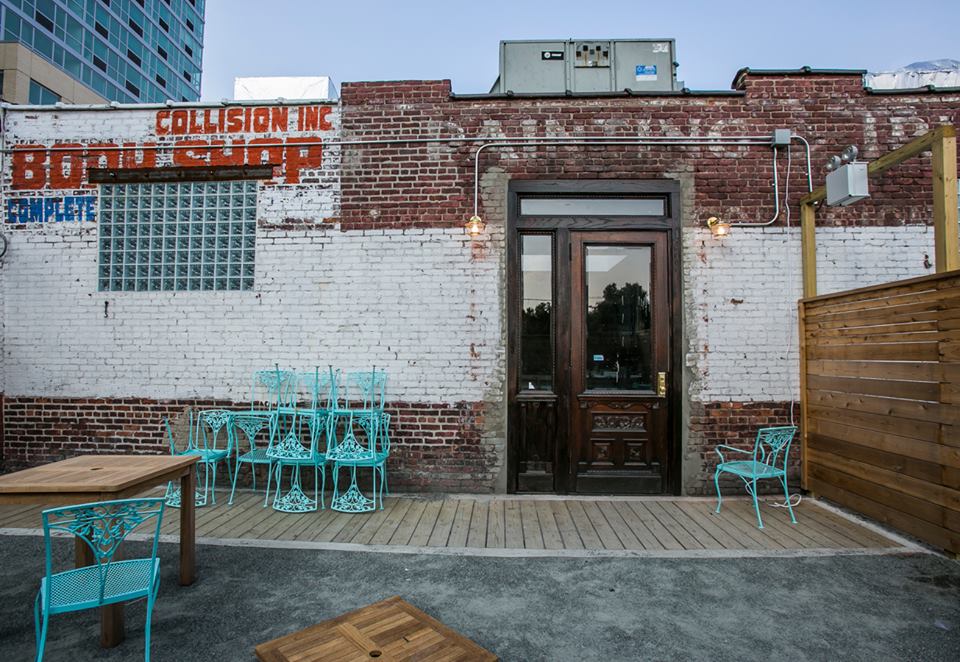 If you get off the G train at Court Square in Queens and smell something burning, don’t be alarmed. Just follow the wood-fired aroma three blocks north and turn into the yard of the old auto body shop on Crescent Street. No, it’s not burning rubber. Yes, our sister borough is picking up on the reclaimed industrial space trend, but instead of opening a mechanic-chic hipster bar like Hot Bird or Mission Dolores, Queens has gone and one-upped up us by turning the old Collision Inc. space into a full-fledged fine dining affair.

The Backstory: M. Wells Steakhouse, which soft-opened last week and officially debuts tonight, is the much-anticipated comeback from Hugue Dufour and Sarah Obraitis, the French-Canadian husband-and-wife team who opened M. Wells Diner in Long Island City in 2010.  The original spot garnered rave reviews for its bone-marrow-in-a-boxcar concept; The New York Times even called it worth flying to Queens for. A rent dispute shuttered the restaurant just a year later, cementing its legend as the greatest Queens restaurant that barely ever was. While the duo opened the casual M. Wells Dinette inside P.S. 1 last year, anxious foodies have been awaiting their full-fledged return.

The Space: The homey dining room, anchored by that wood-burning fire, has all the typical farm-to-table accoutrements: open kitchen, exposed brick walls, reclaimed wood accents, blah, blah blah. They take it to new heights though, with the addition of a trout tank in the middle of that open kitchen, so you can watch your truite au bleu take a swim before it hits the plate. Don’t be fooled by the au courant casual atmosphere, however. This place is for serious, and the old-school dessert cart being pushed around the dining room hints that their aspirations are less neighborhood bistro, more fine dining without the white tablecloth. 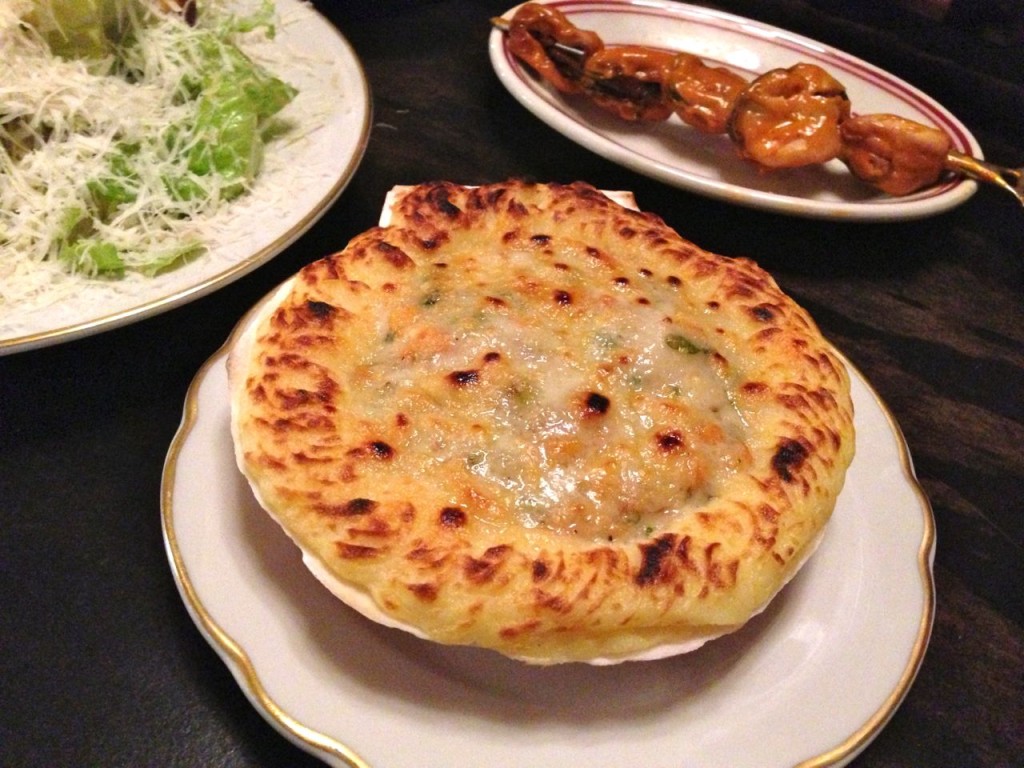 The Food: Anyone not fluent in French cuisine will need a translator to decode the menu, which features a seafood-heavy starter list followed by an array of upscale meats. While it strikes me as a bit pretentious to fill a menu with explanation-free dishes that can’t be Googled, I wasn’t upset about Coquilles Saint Fereol when it arrived, a stew of scallops topped by golden-browned mashed potatoes, sort of a seafood take on a shepherd’s pie, and a perfectly heartwarming cold-weather dish. My tasting group also opted for the less confusing “BBQ mussels on a stick”–on an elaborate gold-hued key actually, and one of the tastiest things I’ve eaten recently, the smoky flavor making me wonder why anyone cooks mussels any way other than over an open fire. 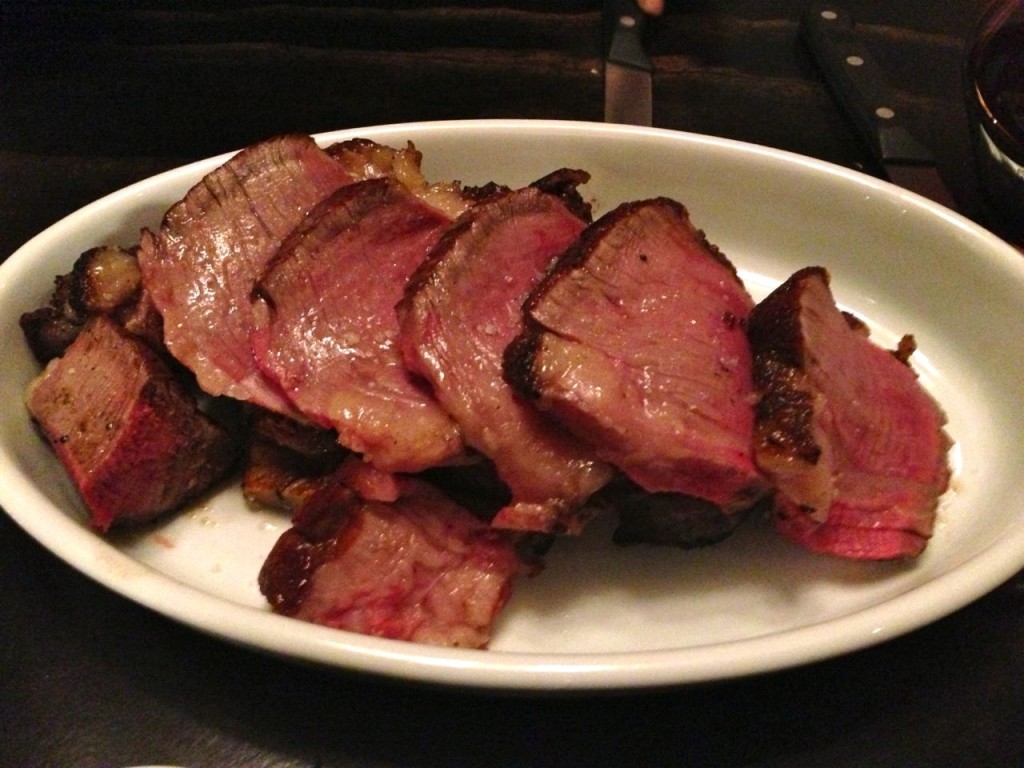 The bone-in chateaubriand for two is a serious piece of meat. Photo: Brendan Spiegel

Moving on to the main attraction, the meat lineup on the menu ranges from purposefully low-brow (“stack of pork chops”) to the outlandishly upscale ($90 bone-in chateaubriand for two). There’s also a “bone-in burger,” which sorry, seems less like a burger than a gimmick on a bun. The steak, while pricey, is about as bloody, tender and flavorful as any red-meat-lover could demand. We also particularly enjoyed the oversized foie gras-stuffed gnocchi–giant orbs of indulgence that are less like a pasta, more like the pillowiest dumpling you’ve ever bitten into. On the less fancy side, the straightforward but supremely flavorful poutine might supplant French-Canadian cohorts Mile End for the title of best poutine in New York.

The Take-home: Despite its playfully downscale tendencies, M. Wells Steakhouse is not a neighborhood bistro. In actuality this pricey new spot will set you back further than most restaurants in Manhattan. While it’s definitely an “only for special occasions” kind of splurge, for eaters who take their meat seriously, it’s the best new reason I know of to leave Brooklyn.

Leave a Reply to K L