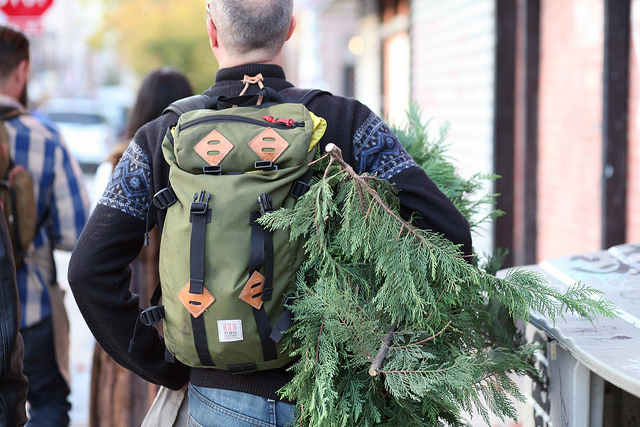 It’s safe to say that when most of us are looking for a new signature scent, we don’t start our search by trimming the branches off a cedar tree on N. 7th Street. It was, however, where West Coast fragrance-maker Hall Newbegin started his search while trekking through the neighborhood looking for ingredients to wildcraft a new cologne.

“No one in the fragrance world uses stills anymore,” said Newbegin while clipping off a bushel of branches, tucking them under his arm and continuing to case the neighborhood for other natural ingredients. “They say that they use naturals, but I know the one [natural] fragrance…maker in the entire world. He lives in South Africa–it’s a barefoot guy on a farm who makes all the world’s [natural] fragrance oils.”

“Years ago, you could buy stuff like this off the shelf,” he adds, pointing to a traveling still used to steam and condense essential oils out of organic matter upon our return to Barber & Supply, where Juniper Ridge will run a pop-up store until Dec. 21. “It’s utterly, utterly obscure and bizarre today. We spent a lot of time going back through old books and seeing how they used to do things. Really, there’s nothing terribly innovative happening here. The technology of this goes back to Alexandria. It goes back 2,000 years. We’re going back to the old ways and doing it in this weird West Coast way.”

Juniper Ridge is part of a new group of independent fragrance-makers who develop small-batch, handcrafted scents, referred to in the fragrance world as niche perfumers. Local examples include MCMC Fragrances created by Brooklyn perfumer Anne McClain and CB I Hate Perfume. As niche perfumery matures, new companies have cropped up to cater to a growing customer base. Bergamot is a new subscription service we wrote about in September that mails out curated collections of small-batch scents every month. These niche perfumers represent a fraction of perfume creation overall, but it is where most of the innovation and new ideas about fragrance can be found right now.

“The niche market tends to be smaller production runs with more emphasis on the ingredients, marketed to a smaller audience and typically more expensive,” says Jason Fried, who co-founded Bergamot with McClain and a Sid Shah. “This audience cares more about the inspiration and story behind each fragrance–as well as finding something that is going to smell and feel different than what you’d expect at the department stores. There’s an authenticity and passion that exists from the niche brands that the mass market simply cannot replicate.”

“What’s so important about a brand like Juniper Ridge,” Fried continues, “is that they offer something which completely breaks the tradition of the mass-market perfume world. While perfume has typically been based on each brand iterating on the best sellers of the past, Juniper Ridge has taken a completely different approach by focusing on strictly natural ingredients that they source and distill themselves from their local environment.”

Juniper Ridge’s wilderness fragrance distillery is located in Oakland, Calif. They use 500-gallon stills, which, at capacity, can distill about a half gallon of essential oil from plants like the cedar we collected on our walk. “If you took redwood and did the same thing,” Newbegin says, “you’d get like a beer bottle of oil, which is the reason the perfume industry gave up on naturals a long time ago. It’s expensive. All their money is on Brad Pitt on a billboard. The juice in the bottle isn’t different from Britney to Chanel to Comme des Garconne, whatever. It’s all gasoline–petrochemicals–that’s been converted. That’s what all perfume is. People have been using it for a long time, but it’s just kind of grody smelling to me.”

Today, most fragrances, niche or not, are composed of synthetic ingredients and the scent combinations draw from four major categories–floral, oriental, woody and fresh. Chanel Mademoiselle, for example, is an oriental while MCMC’s Hunter fragrance is a woody scent, and J’Adore by Dior is a floral. It’s a formulaic approach that has dominated the fragrance market for almost a century, and Newbegin would like to see it replaced by a more geographic way of creating scents–think of it as capturing a sort of scent terroir–or a form of fragrance-making that is more memory-based. 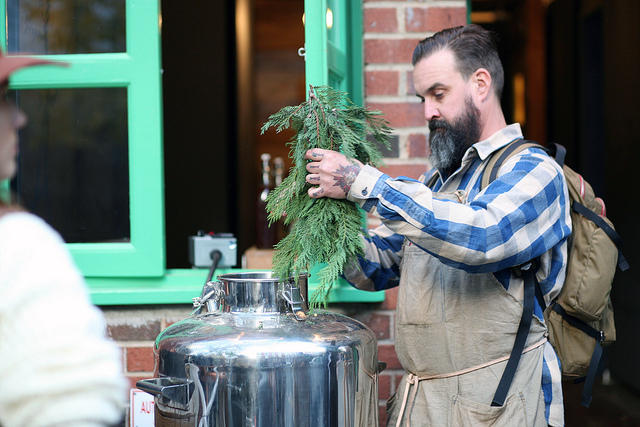 “I always think about what we’re doing as creating a new fragrance grammar for the West,” he says. “We’re making a new version of fragrance here where it’s about place. It doesn’t have to be nature. It could be taking the Puget Sound Ferry across to Bainbridge Island. It could be riding your motorcycle in the Santa Cruz Mountains. It could be so many things. Why does fragrance always have to be these different counterpoints? Why can’t we make fragrances that smell like the fall in New York?I’m hoping fragrance becomes, just like wine did, something people will take and run with and get weird with. We’re good at that on the West Coast. We take normal things and get weird with it, just like with cuisine and wine and coffee.”

An avid hiker, Newbegin began backpacking up and down the West Coast while in his twenties and started trying to recreate the smells of his favorite places in 1998, forming the world’s only wild fragrance company. With Kaufmann, he collects plant species they then use to produce a line of incense, soaps, sprays and colognes that capture the scents of California locales like the Mojave Desert, Big Sur, the Yuba River and Caruthers Canyon in the Inyo National Forest.

Newbegin and Kaufmann are both extremely knowledgeable about their native flora and fauna, even in New York, where they can spot a Douglas Fir behind an chain-link fence in a vacant lot (“Talk about an old friend,” Newbegin says. “See those cones hanging down? Only Douglas Fir does that.”), and name the genus and species of several plants they come across on our nature walk–some of which were smaller cousins to West Coast plants, including the giant redwood trees.

“We talk about it like an aromatic snapshot of this particular time, this particular moment,” Kaufmann says as we walk. “It’s different from morning to night and season to season,” which is why Juniper Ridge products are packaged with a batch number that coincides with when they were created. Like wine from a particular year, the same scents can smell slightly different depending on when the ingredients were distilled.

In California, they use a field lab van and a traveling still to traverse the West Coast and distill fragrances on the spot using the heat from a campfire. They also work with local state parks to take unwanted trimmings off their hands that would otherwise be burned.

Back at Barber & Supply, Kaufmann gets to work filling a traveling still with the trimmings from the cedar tree, where it will be combined with water. “It takes a few hours to boil a few gallons of water within this thing with all this plant matter in there,” he explains. “The steam will start to rise and push that through this condenser–it’s a hollow tube hooked up to a radiator. Cool water is circulated through, which is what we mean by condensing. We return the steam to its liquid form, and in that steam is just a little bit of essential oil that will sit on top given the nature of oil and water–like salad dressing.”

Each essential oil is kept separate until the time comes to create a new fragrance Newbegin says. Then it’s time to set to work recreating the combination of smells that remind him of a place.

“I always think of synthetic fragrance as junk food,” he explains. “It’s appealing to your nose when you first smell it, and you’re like ‘Oh my god, I want that.’ But then when you live around it, it just gets gross whereas our fragrances, it’s no different than taking a hike.”

Kaufmann will be demonstrating Juniper Ridge’s distillation process this afternoon, Nov. 22 and tomorrow, Nov. 23., from 4pm to 6pm. The Juniper Ridge pop-up shop is located next door to Barber & Supply at 101 N. 8th St. (between Wythe and Berry).