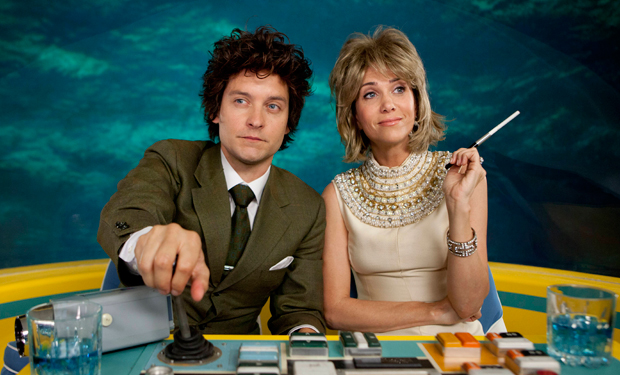 With much of network television on hiatus until after awards season and the Winter Olympics are over, we have a solid eight weeks or so without a single new episode of many of our favorite shows like Scandal–that’s a lot of time to wonder what Mama Pope is up to. Here are six shows you may not have watched–or might want to return to–that have plenty of episodes online, to tide you over. 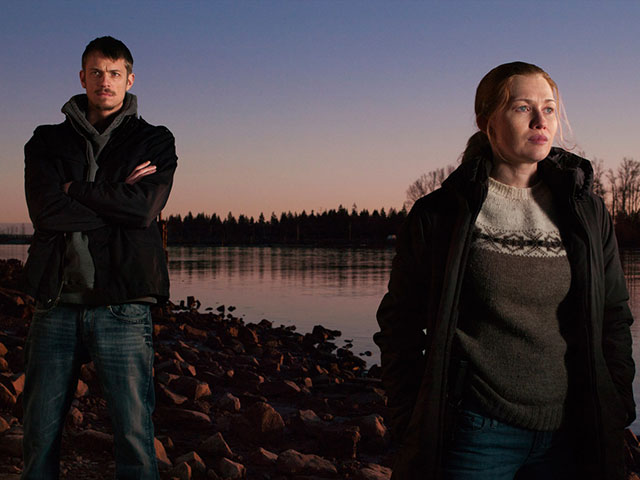 The Killing, available on Amazon, iTunes and Netflix
All 38 episodes of this cop drama, set in an eternally rain-soaked Seattle are now online, and Netflix ordered a final, six-episode fourth season in November (no air date as of yet). The show is like a latter day Law & Order in that it lacks a lot of the gore contemporary crime dramas have come to depend on; instead, the cameras focus most of their attention on the series’ main actors Mireille Enos (World War Z), who plays detective Sarah Linden and her partner Stephen Holder, played by  Swedish actor Joel Kinnaman (who will play the next incarnation of RoboCop, which comes out in theaters on Feb. 12). Linden likes to get a little too close to her cases and Kinnaman masks his Scandinavian accent with what can only be described as a colorful urban dialect he picked up somewhere between Oakland and watching old Eminem videos. Brooklyn’s own Peter Sarsgaard has an impressive recurring role in season three, and it’s worth riding the roller coaster from start to finish–through serial killings, smoke breaks and awkward sexual tension–just to see how it ends. 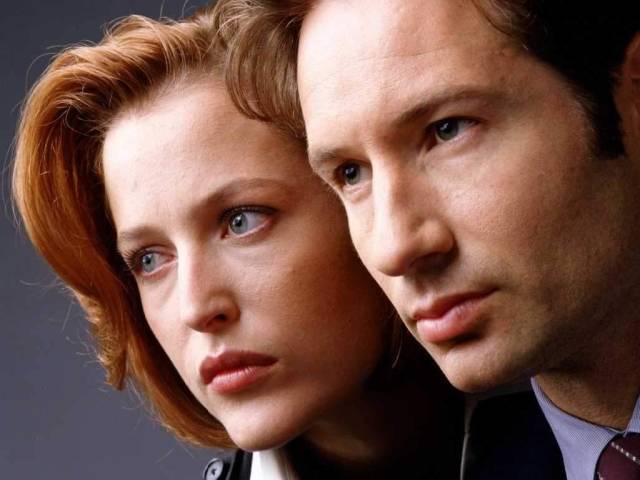 The X-Files, available on Netflix
If you need some serious binge watching material, and have a taste for conspiracy theories, the supernatural and the 1990s, then you’re in luck–all nine seasons of The X-Files are available on Netflix. It’s a classic odd couple pairing–Fox Mulder (David Duchovny) is an FBI agent searching for the truth about alien abductions, international conspiracies and all manner of paranormal activity, and Dana Scully (Gillian Anderson) is his straight man, science-loving partner. While Scully’s ill-fitting pantsuits recall the worst of ’90s fashion, the show’s writing is totally self-aware and feels fresh, funny and smarter (Breaking Bad creator Vince Gilligan was a producer and writer) than you might remember. It’s also fun spotting soon-to-be famous actors like Ryan Reynolds, Jack Black and Giovani Ribisi. Plus, rumors have been swirling for some time about two things: another X-Files movie, and a romance between Duchovny and Anderson. The truth is out there. 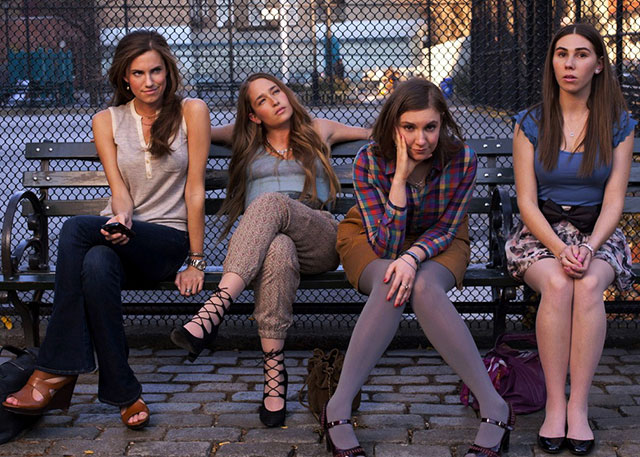 Girls , available on Amazon, iTunes and HBOGo
I still haven’t fully recovered from the cotton swab scene toward the end of season two of Girls, but I definitely respect the direction Lena Dunham took her hit HBO series in for its sophomore season. Each of the cast’s main characters faced adversity in one form or another, much like the average twenty-something trying to make it in New York today (really anyone trying to make it in New York today). The girls of Girls are growing up–getting divorced, getting fired and getting on with it. Nominated for two Golden Globes in 2014, the show’s third season premieres on Jan. 12. What we know thus far is that everybody’s girl crush and J.Crew’s president Jenna Lyons makes a cameo in the upcoming season as Hannah (Dunham)’s employer; when she’s not getting her head stuck between chair legs, Hannah is having it examined by her therapist; Marnie (Allison Williams) is as anal retentive as ever; Shoshanna (Zosia Mamet) and Jessa (Jemima Kirke) are back to sharing a bedroom–and best of all, the writing seems as sharp as ever.

Bonus reason to beg for your friend’s HBOGo password or subscribe to HBO: If a new season of Girls wasn’t enough incentive, Woody Harrelson and Matthew McConaughey’s new dark cop drama True Detectives, which also premieres on Jan. 12, is another. Kind of like The Killing, Martin Hart (Harrelson) and Rust Cohle (McConaughey) are partners in crime solving, pursuing the case of a murdered prostitute that turns cold. The show spans their 17 years of sleuthing across southern Louisiana.

The Spoils of Babylon, available on IFC
My mind immediately went to Peyton Place after seeing the first subway advertisement for this upcoming, six-part miniseries being produced by IFC. PP was the original American soap opera, based on a novel of the same name. Its small-town, 1960s story lines–teen pregnancy! Adultery! Murder!–helped launch the careers of actors like Mia Farrow and Ryan O’Neal, and it’s exactly the type of over-the-top entertainment that Spoils is spoofing–the novel-for-television series that were so popular during the disco decade (The Thorn Birds, The Winds of War). It’s directed by former Saturday Night Live writer Matt Piedmont and produced by the people behind Funny or Die. Suffice if to say, you shouldn’t take anything that happens when Spoils premieres on Jan. 9 too seriously–it looks like the second coming of Dynasty–with a cast that includes everyone from Jessica Alba to Carey Mulligan, Val Kilmer, Tobey Maguire, Michael Sheen, Tim Robbins, Kristen Wiig and Will Ferrell. 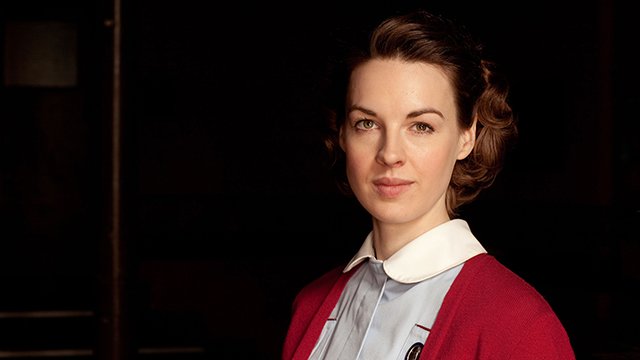 Call the Midwife, available on Netflix, Amazon and iTunes
In mid-century London, the British government set out an ambitious plan to bring health care access to city slums, and this BBC drama follows Jenny Lee (Jessica Raine), a young, middle-class nurse sent to work at Nonnatus House, a nursing and midwifery convent in London’s impoverished East End. Based on a memoir written by the real life Jenny Lee, it’s a gorgeous period piece full of smart hats and sturdy bicycles, and an alternatively delightful and heartbreaking portrait of class, youth and hope in post-war Britain. Season 3 airs on PBS starting March 30. 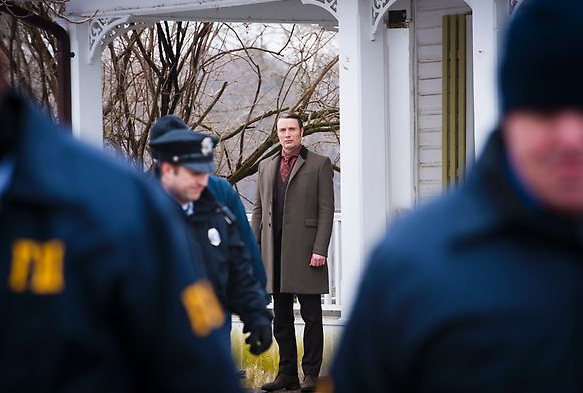 Hannibal, available on Amazon and iTunes
If a re-imagined, pre-capture Hannibal Lecter not played by Anthony Hopkins sounds like a terrible premise for a network television show to you, I’m with you. But Hannibal defies all expectations of a tired retread full of gratuitous face eating. As played by Mads Mikkelsen, a Danish actor you may remember crying tears of blood as a Bond super villain in Casino Royale, Lecter’s ferocious brilliance is channeled into outward elegance and civility. Dr. Lecter’s impeccable suits, incredible cooking and witty conversation have made his dinner parties the most coveted invitation in Baltimore. He’s also professionally engaged, serving as psychiatrist and confidante to FBI profiler, Will Graham (Hugh Dancy),  a consultant to the Bureau and a personal friend to Graham’s boss, Jack Crawford (Lawrence Fishburne). As dark, violent and intelligent as its namesake, the second season of Hannibal starts on Feb. 28 on NBC.