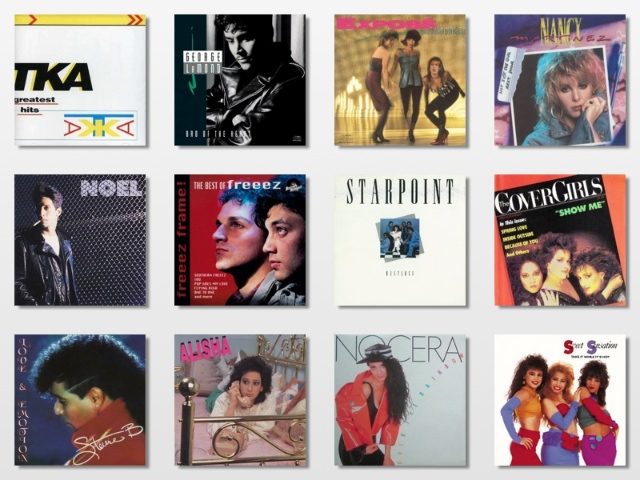 It’s funny how your perspective about certain things change as the years go by; what you didn’t like back then or rebelled against as an adolescent is now a part of who you are and where you came from. That’s true of pop music. It happens to everyone: during your teen years, you’re exposed to the sounds that were hot at the time, to the point of over-saturation.

For me that was dance music from the late ’80s, particularly freestyle–the merger of disco and electronic music made by mostly Latin-American recording artists and producers. Especially popular in New York City and Miami, freestyle was high-energy urban dance music characterized by pulsating beats-per-minute and distinctive Latin rhythms with lyrics of romantic yearning and angst. In New York City, you were likely to hear that music constantly playing on radio stations like Hot 97 and Z-100. Freestyle playlist, after the jump>>>


Freestyle was unofficially the soundtrack of my Bay Ridge adolescence (and very likely that of neighboring Bensonhurst as well), somewhere between 1987 and 1990. It only made sense given that fact that a decade earlier, Bay Ridge was the home of the 2001 Odyssey disco club, which was prominently featured in the 1977 classic film Saturday Night Fever. And dance music–including disco and freestyle music–always seemed popular in traditional neighborhoods with a strong Italian-American base. I can remember cars blasting away freestyle music from the speakers in the neighborhood, which was usually an indication of young people cruising (although the noise most likely didn’t please the more grown-up folks on the block).

My older sister Jenny was hugely responsible for my introduction to freestyle. She was always a dance music fan going back to the late ’70s when she played Donna Summer’s On the Radio: Greatest Hits Volumes I and II and Chic’s “I Want Your Love” on our record player. During freestyle’s heyday, she bought albums and cassette singles by artists such as Alisha, Expose and Debbie Gibson and played them at home, sometimes with me in the same room whether I liked it or not. Simultaneously, I was fed with the freestyle music of the Cover Girls, Nancy Martinez and Starpoint from the radio in addition to my Top 40 diet of George Michael, Whitney Houston and Rick Astley.

At that time, I didn’t really appreciate freestyle. First, I always regarded it as my sister’s music, so I wanted to find my own records as a teenager–thus, I gravitated towards classic rock acts like Foreigner, Led Zeppelin and Yes. Second, I had associated freestyle with Bay Ridge and wanted to discover life beyond its suburban-like confines. And third, I felt like some of freestyle’s artists were nothing more than one-hit wonders.

But freestyle music had already left its mark on me, even though it declined in popularity by the early ’90s. Often I would have a hard time remembering my dad’s birthday (I still have that problem), and yet strangely I can always hum the chorus to “Love Letters” by Giggles or “Summertime” by Nocera. And now with Spotify, I have exponentially rediscovered some of the freestyle hits that I hadn’t heard in a quite a while. In retrospect, it was actually good music due to its relentless energy and streetwise attitude. You can’t help but want to move to the beat, even if you are too embarrassed to dance.

The genre’s heyday has long faded, but it still lives on through local radio station 103.5 FM WKTU. And in Bay Ridge, there’s a club called Cafe Remy that plays the music and has freestyle acts performing there. Most recently I came across Maura Johnston‘s brilliant essay, The Season Came to an End: Freestyle Brings Loneliness to a Crowded Dance Floor, that reawakened my memories of the music from that denim-jacket/big-hair era. Aside from offering an historical overview of the music, the essay points out that the lyrics in most freestyle tracks had an undercurrent of romantic yearning and melancholic drama, not too different from the themes touched on songs by Roxy Music and Chic.

Freestyle deserves more of a critical evaluation and greater appreciation than just being regarded as a regional phenomenon. And unlike other older music, it doesn’t sound too dated. You can play it at any club right now in the city and it’ll still get people onto the dance floor–whether they’re 20 or 50, Latino or Italian, or from Bay Ridge or Long Island. Underneath those dazzling rhythms and frenetic beats, this music really has substance.

The Season Came to an End: Freestyle Brings Loneliness to a Crowded Dance Floor by Maura Johnston.  Published by Feedback Press, 2012.