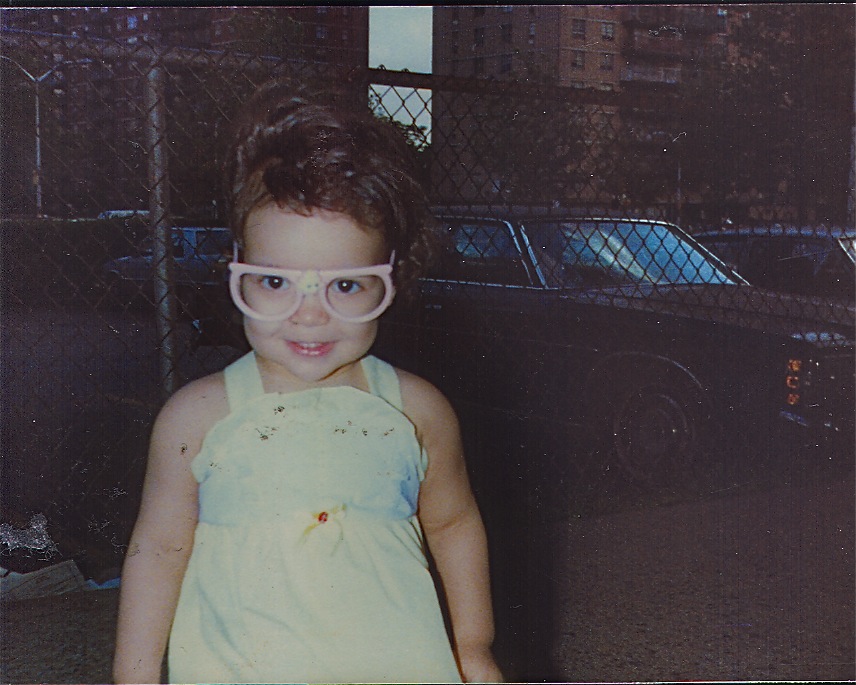 The author, in front of Lindsay Park, the Mitchell-Lama building where she was raised and where she lives today.

I was born in Williamsburg, Brooklyn in 1987. The day my mom took me home from the hospital, “(I’ve Had) The Time Of My Life” by Bill Medley and Jennifer Warnes was the #1 song on the Billboard charts and the Cosbys, who lived in a Brooklyn Heights brownstone, were America’s favorite family. My mom and I were headed back to her one-bedroom apartment in Lindsay Park, a Mitchell-Lama development in Williamsburg where I still live today.

Thanks to New York City’s Mitchell-Lama program, which protects moderate- and-middle income families, my mom’s housing costs have gone up minimally over the past two decades. I moved back home with her a little over a year ago, to a two-bedroom apartment in the same complex (she upgraded when my younger sister was born).

I am also on several waiting lists for my own Mitchell-Lama studio or one-bedroom, which I hope to move into before I’m 30. I personally don’t see another way to stay living in my borough as rents rise and gentrification changes local dynamics. I work as hard as the next person, but my industry, book publishing, isn’t so lucrative for the average employee. I’m a Brooklynite, just trying to live on my own in the neighborhood where I went to elementary and junior high school, rode my first bike, had my first kiss and threw my first snowball.

What is Mitchell-Lama Housing?

The Mitchell-Lama Program was a law written in 1955 by Senator MacNeill Mitchell and Assemblyman Alfred Lama, under Governor Averell Harriman designed to create and maintain affordable housing in New York State.

Right now, there are 97 city-sponsored, moderate- and middle-income rental and cooperative developments in New York City, totaling more than 44,600 units.  The NYC Department of Housing Preservation and Development (HPD) supervises waiting lists, management issues, and has other oversight responsibilities for 78 Mitchell-Lama developments. An additional 19 developments have shared supervision by HPD and the Federal Department of Housing and Urban Development. All that translates to more than 400,000 New Yorkers, teachers, postal workers, construction workers, police officers, municipal workers, secretaries, students and homemakers from many ethnic and cultural backgrounds, who are able to afford to live in this crazily expensive city.

Mitchell-Lamas aren’t the glamourous glassy condos you see erupting rapidly these days in emerging neighborhoods like Williamsburg, Bushwick and Crown Heights, but they’re awfully clean and spacious on the inside. Most Mitchell-Lamas include security, laundry, excellent maintenance, parking lots, community centers with activities, and a tenants association. My current bedroom is the size of many a Williamsburg studio apartment.  Monthly rent varies depending on the building, but a recent listing on Orient Ave. in Williamsburg offered one-bedrooms for $960 and two-bedrooms for $1,063. There are income limits and other occupancy requirements you have to meet as well. That $1,063 two-bedroom is only open to a family unit of two to four people (families can be adult siblings, domestic partners, parents and children–the definition is broad) with a total income range of $35,760 – $51,540, and in this case, preference will be given to applicants who are current residents of Brooklyn Community Board 1.

Mitchell-Lama buildings are either limited-equity cooperatives or rentals. Buying a coop requires an initial investment that is tiny by New York standards (usually between $5,000 and $20,000 depending on the apartment), and financing may be possible. After the initial investment, there is not much difference between living in a co-op versus a rental. As an “owner,” you pay monthly “carrying charges,” akin to maintenance fees. You cannot sell the apartment, except back to the housing company that owns the development, at which time you receive a payout calculated on the initial downpayment, the number of shares you “own” (similar to equity in a traditional  mortgage, though, as indicated by the term “limited equity,” you don’t accrue value in the same way as a mortgage) and the amortization of the building. If something happens to you, a family member (again, with the broad definition of family) can take over.

Building owners who participate in the Mitchell-Lama program can opt for a “buyout” after 20 years–that is, they can move their rents to market rate. If you’re a co-op owner when a building buy-out happens, you stand to make some serious cash, because you can sell your apartment at market rate, though buyouts can be very bad news for renters, whose rents may rise astronomically.

How Do I Apply for One of These Apartments?

First a word–this is a long process likely to take years and is only worth it if you truly plan on living in New York for the long term. That said, it works like this: You apply to get on an open waiting list via snail mail, email, telephone, or you apply in person–how you do this will vary by building. New listings open up all the time, but what I personally do, is go to New York City’s Mitchell-Lama housing site every January. I look through the list of developments with open waiting lists, I google the project names in Brooklyn with open waiting lists to see if they’re in neighborhoods that I like and can easily commute to and from, and I request an application by mailing a letter that says something like:

To Whom It May Concern,

I include a self-addressed, stamped envelope and I wait to hear back to see if I made it to a waiting list that is determined through a computerized lottery. If I happen to win the waiting list lottery, I get my envelope returned with an application, which I then fill out and return to claim my position on the list. Every year, I send a letter to solidify my continued interest and I include a self-addressed, stamped envelope again, to receive a confirmation number that I’m still on the list.

To Whom It May Concern,

I am still interested in the waiting list for a studio room unit (Clinton Towers). My address is the same and my credit can be checked.

I’m on one waiting list for an apartment in Williamsburg and I won the waiting list lottery and then sent applications for two developments more this year, and I hope to get a call sometime in the next three years, telling me that I’ve scored the perfect spot. There is no master list, each development is different, with slightly different rules, prices and requirements.

Every Mitchell-Lama unit has a minimum and maximum income and a minimum and maximum number of occupants. Since I’m applying as a single person, I am limited to applying for studios and one-bedrooms that fit within my total annual income. On average, you have to make less than $41,000 per year for a studio or one-bedroom. If I move into the apartment and start making more money than that, I pay surcharges according to my income–you file a tax return with the building each year so that they can check on occupants’ income. In the future, if a boyfriend moves in with me, I file an affidavit, and after two years or marriage, he can join me on my lease. If we have a child, I can apply for a waiting list for a larger apartment and will be given priority over non-residents in my project.

Are There New Mitchell-Lama Developments Being Built?

Mayor Bill de Blasio, who made the shortage of housing for working-class New Yorkers a campaign issue, has said that he hopes to build or preserve 200,000 affordable units over the next 10 years, with the help of Deputy Mayor Alicia Glen. Also, in early February, a group of state Democrats unveiled a $750 million plan (still pending) to build new middle-income housing in New York State. The Independent Democratic Conference wants to construct thousands of new units of affordable housing in New York City, Yonkers, Rochester, Buffalo and Syracuse over five years in an effort to revive the Mitchell-Lama program. The proposal would mandate the state to spend about $150 million a year to finance more affordable mortgages for developers and create a new tax credit for developments to encourage developers to build middle-income housing. In the city, the housing would target residents earning about $75,000 a year to $100,000 a year for a family of four. Ed Rosner, a legislation officer at the Mitchell-Lama Residents Coalition, confirmed that there are two bills currently pending for assembly and senate approval for more support for the Mitchell-Lama program in New York City.

Those additional developments are much needed, because the waiting lists are already long (word on the street at Lindsay Park is that more than 26,000 applications were filed when the 1,000-spot waiting list opened recently), and I’m not the only young Brooklynite with a plan to stay in the borough I love and beat the rising cost of real estate. Yeidy Santiago, 25, a former Williamsburg resident who lives in Bushwick, is on a waiting list at Lindsay Park, where I live and where my sister is also on a waiting list. “I was born and raised in a Mitchell-Lama,” says Santiago. “I truly believe it was because of this that my parents were able to provide for me growing up. Living in a Mitchell-Lama will allow me to put money toward important bills other than rent, such as my never-ending student loan payments. It would also provide me with an opportunity to move back into my beloved neighborhood of Williamsburg, which I have been priced out of. I am very excited and I highly encourage everyone to apply for Mitchell-Lamas. All it takes is a postcard and a little bit of luck!”