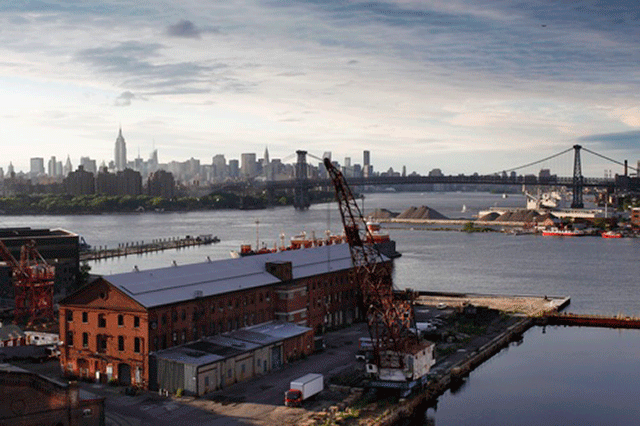 In honor of the Brooklyn Navy Yard being named a national landmark, we went digging for little-known facts and fodder from its more than 200-year-old history. Photo: BLDG92

The Brooklyn Navy Yard has long been a local treasure, with its odd collection of buildings, including industrial spaces, former admirals’ quarters and an eerie decommissioned hospital, but as of last month, it’s now a national one, too. The U.S. Department of the Interior added the industrial park to its National Register of Historical Places on May 22.

Aside from adding to the prestige of a place—the Navy Yard now ranks up there with the Empire State Building and Statue of Liberty as historically significant spots in NYC—national landmark status tends to translate into federal funding, a point well-documented in earlier coverage. Rather than make this momentous occasion all about the benjamins, however, we decided to dig through the new digital archive of the Brooklyn Daily Eagle (which we wrote about in April) and the Navy Yard’s own archival info to find a few little-known facts about the country’s newest national treasure. Here are five things you might not know about the Brooklyn Navy Yard, which you can use to school your co-workers at the water cooler.

1. The Brooklyn Navy Yard is one of only six original shipyards in the country and one of the first five President John Adams authorized to be built before leaving office at the turn of the 19th century.

2. Even though it was still an active naval space, in 1871 the question of whether or not you could sell the Brooklyn Navy Yard was being batted around by members of Congress, who were considering relocating the shipyard to New London, Conn., a proposition that the Brooklyn Daily Eagle called “little short of insanity.”

3. In the Nov. 27, 1944 edition of the Brooklyn Daily Eagle, a landlady claimed that while she was down at the Navy Yard collecting rent from a dockworker, her house went missing. She in turn vanished once the police started looking into the matter.

4. When the U.S.S Maine, which was built at the Brooklyn Navy Yard, was put into commission on Sept. 17, 1895, the Brooklyn Daily Eagle called it a “floating fortress,” and “the most powerful ship ever put in commission in this country.” Three years later it sunk off the coast of Cuba in the Havana harbor, after an explosion suspected to have been set by Spanish sympathizers unhappy with the U.S. presence on the island during the Cuban War of Independence. The battleship’s destruction helped spark the Spanish-American War and one memorable rally cry: “Remember the Maine, to Hell with Spain!”

5. Seamen docked in the Navy Yard used to get laundry lessons at the Hotel St. George on Henry St., which was once the largest hotel in New York City, but now serves as student housing. Apparently there is really a science to starching a sailor suit.