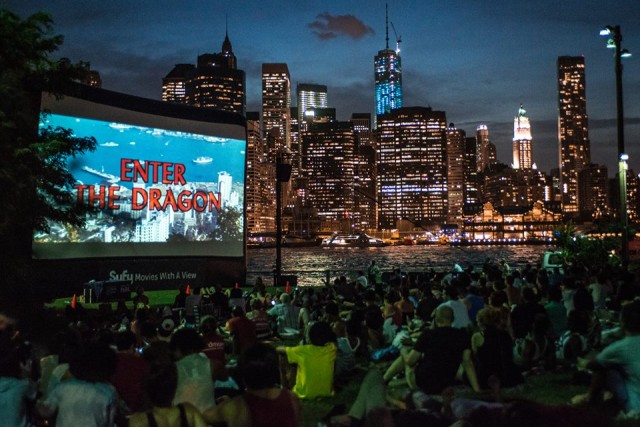 Can you feel it?  Summer’s here, and with it comes parktime, beachtime, outdoor drinking, late and Instagram-worthy sunsets, BBQs, concerts, boat rides, and the return of that feeling that you just might live in the greatest borough of the greatest city in the world (well, besides the persistent hot garbage aroma and anything having to do with the subway in August). There’s a lot to do around here when the weather cooperates, but one of my favorite ways to while away a lazy summer weeknight is to grab some friends and a picnic blanket and head out to one of the many venues around town showing movies outdoors on a big screen.

Whether it’s an old favorite that you can recite word for word or a new-to-you flick that you’ve been meaning to check off your list, there’s something undeniably awesome about experiencing a film while sprawled out under the stars with the Manhattan skyline or the Statue of Liberty or the Cyclone as the backdrop. And then of course, there’s the shared experience. I’ve never seen a group of Brooklynites as relaxed and unconcerned with being cool as the crowd at Ferris Bueller’s Day Off at Brooklyn Bridge Park last summer, when everyone spontaneously jumped up and danced their asses off during the “Twist & Shout” scene.

Just like last year, we’ve got a Google calendar for you detailing all of this summer’s offerings so that you can transfer them individually or en masse to your own calendar and start making plans asap. As you can see, there’s a movie showing almost every night in July and August, so I narrowed the list down to a few of my own personal picks of the week below. The Coney Island Flicks on the Beach just released its schedule, so it’s in the calendar but not in the roundup below, and be sure to stay tuned because we’ll update again when 50 Kent Ave. in Williamsburg finalizes its list. Whether you’re headed to McCarren Park, Brooklyn Bridge Park, Valentino Pier, Habana Outpost, or any one of the other designated spots, make sure you arrive early to ensure a decent view and some room to relax, sit back, and enjoy the show!

Week of 6/16 Before the big hitters like Summerscreen and Syfy Movies with A View kick off their 2014 seasons, check out something you’ve definitely never seen before from Rooftop Films on Saturday, June 21 at Industry City in Bay Ridge. Living Stars, a documentary/hour long dance party, features footage of a series of real people in Buenos Aires dancing their hearts out to their chosen pop songs. The film received a “riotous reception” at Sundance, and its popularity means that you have to reserve a spot in advance, although tickets are free.

Week of 6/23 In my opinion, When Harry Met Sally set a standard for romcoms that hasn’t been achieved since, and on Tuesday, June 24, it is being screened for free simultaneously in every borough in partnership with the Tribeca Film Festival. Depending on what’s more convenient, you can sing Surrey with a Fringe On Top in front of Ira in Socrates Sculpture Park or be proud to partake of pecan pie in Coney Island–either way, baby fish mouth is sweeping the city and you should make sure you’re in the front row.

Week of 6/30 Hearken back to those halcyon days when Tom Cruise was a heartthrob with human teeth who had never even cracked a copy of Dianetics on Sunday, July 6, when Habana Outpost fires up Top Gun. If you feel the need for speed, take a ride into the danger zone and back to the cheesy 80s with Maverick, Goose, Iceman, et al. That volleyball scene sure hasn’t stood the test of time, but the movie itself is a classic and the perfect choice for this viewing format.

Week of 7/7 This week is a tough call. On the one hand, school’s out for summer, and there’s no better time to revisit Mitch, Randy “Pink” Floyd, Slater, O’Bannion, the wrong Mr. Pickford altogether, and the rest of the Dazed & Confused gang at the opening night of Red Hook Flicks on Tuesday, July 8. It’s no party at the moontower, but it might be the next best thing. On the other hand, the pages of Tiger Beat come alive when Habana Outpost screens The Outsiders, starring basically everyone I ever had a preteen crush on (be still, my beating 6th grade heart, Soda Pop), on Sunday, July 13.

Week of 7/13 Ahhh, Sharknado, the Steve Sanders vehicle about tornadoes inexplicably filled with poorly-animated sharks that launched a million tweets last summer. . . come for the nonsensical plot and bad CGI, stay for Tara Reid’s Razzie-bait performance. I don’t want there to be any confusion: this movie is very, very bad. But, I also had a lot of fun watching it on TV last year, and I imagine that the experience of watching the chainsaw scene with hundreds of other haters at Brooklyn Bridge Park on Thursday, July 17, will be pure entertainment. If you’re one of those people who gets all hung up on “quality,” though, you should probably check out Hustle & Flow or Heathers instead.

Week of 7/21 On Friday, July 25, the Narrows Botanical Garden in Bay Ridge is showing one of my favorite film discoveries of the past several years: Taking of the Pelham 1,2,3. I’m talking the classic 1974 version with Walter Matthau and Robert Shaw, not the two (why?) disappointing remakes that have been released since. An old school heist flick about a subway hijacking and the detectives tasked with putting a stop to it, the movie features some really awesome footage of NYC in the 70s (including shots of a barely recognizable pre-Kmart Astor Place). If you’re feeling a little more high falutin this week, the French Embassy is screening Le Magnifique, the first of two films that will be shown in Transmitter Park as part of its Films on the Green 2014 series, on Friday, July 25.

Week of 7/28 There’s a lot of Winona to be watched this week, with Heathers and Beetlejuice screening back-to-back at McCarren and Brooklyn Bridge Parks. I’ve seen both movies about a billion times each so I think it’s time for me to revisit Fried Green Tomatoes in Red Hook on Tuesday, July 29. It’s been a while, but I remember a feel-good movie about a small southern town with solid performances from Kathy Bates, Jessica Tandy, and two people who I forever confuse almost as much as I do Dylan McDermott and Dermot Mulroney:  Mary-Louise Parker and Mary Stuart Masterson.

Week of 8/4 True film aficionados are probably going to jump at Paris Is Burning, Cat on a Hot Tin Roof, or Singing in the Rain this week, but my pop culture taste runs recent and rough around the edges so I’d have to go for the Big Lebowski at McCarren on Wednesday, August 8. The Coen Brothers’ cult classic is always fun to watch and I think that this setting will ratchet the experience up to new heights. Expect to see lots of crowd participation, White Russians, and bowling shirts.

Week of 8/11 I’m not a huge musical person, but I’ve had a thing for West Side Story ever since I was a little kid. Who can resist the Jet Song, I Feel Pretty, the dancing, and the rumbling? Luckily, you don’t have to, because Maria and Tony will be playing out their doomed love story yet again at Habana Outpost on Sunday, August 17. That said, McCarren Park is screening it’s Audience Choice selection on Wednesday the August 13, and if The Warriors wins you have the opportunity to see a much grittier take on period NYC gang life.

Week of 8/18 Oof, this week is a challenge, but as much as I love The Birds, Independence Day is just, to me, exactly  the kind of big-budget, action-filled, blockbuster that free outdoor screenings were created to showcase. It’s got it all: worldwide alien attacks, Will Smith, explosions, a dramatic soundtrack, and lots and lots of carnage. Maybe you’re a grown-up now and wouldn’t pay $13 to see this kind of over-the-top schlock in a theater anymore, but the beauty of this is that it’s 100% free.

Week of 8/25 On Tuesday, August 26, Red Hook Flicks closes out its season with On the Waterfront, which seems like an appropriate choice for a venue just south of the Red Hook loading docks. If you’ve seen it already, Marlon Brando’s incredible performance is well worth watching again, and if you haven’t, what are you waiting for?  Thursday, August 28, is the day set aside for the Audience Pick at Brooklyn Bridge Park, which will be open to public vote later this summer.

Leave a Reply to Jayme