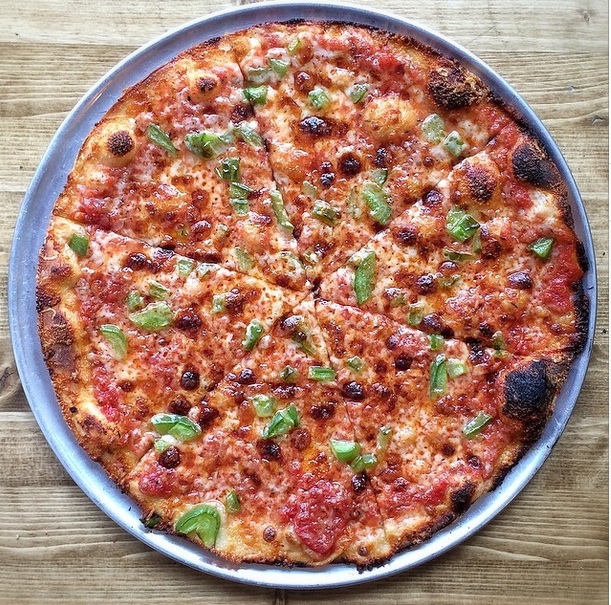 New York has become quite the pizza snob’s paradise lately, what with all the custom-made wood-fired ovens, truffled thin-crusts, and six-week-only ramp-topped pizzas. So perhaps it was only a matter of time until someone opened the ultimate anti-pizza-snob pizzeria. Longtime pizza blogger Adam Kuban (of Slice and Serious Eats) recently turned his hands to making pies, first at Paulie Gee’s in Greenpoint, and now at his own pop-up shop, Margot’s Pizza. For his latest effort, Kuban draws his inspiration not from the trattorias of Naples, but the dive bars of New Jersey.

Kuban’s focus in on “bar pizza,” the type of greasy, thin-crust, beer-soaking pie found at neighborhood bars throughout the Northeast. Places like Star Tavern in Orange, New Jersey; Colony Grill in Stamford, Connecticut; and Lee’s Tavern on Staten Island have drawn loyal followings for their bar pizzas, and Kuban set out to replicate that style. As he describes it, bar pizza should be very thin crusted, decidedly crispy, and well-done but not burned. It resembles a classic New York slice in the focus on lots of mozz and olive oil, but on an almost cracker-like crust. After years of experimentation, Kuban has set up shop at the excellent Emily’s pizzeria in Clinton Hill, whose owners were nice enough to let him sling his bar pies on Saturday afternoons once every few weeks, when the restaurant is normally closed.

Here’s how it works: sign up for Margot’s mailing list to be alerted when the next pop-up will occur. This past Saturday’s debut sold out quickly (I know, I know, you can’t do anything in this town without getting on a waiting list). If you’re lucky enough to nab a seat, $25 gets you one of Emily’s signature salads along with one of four pies: the basic Margo-rita, the truffle-y Funghitown, a classic pepperoni, or the Love Supreme, topped with sausage, diced green pepper, shaved red onion, oregano, and black pepper. The portion size is advertised as “large enough to share but small enough you could house one yourself” and that’s about accurate.

While I’m not well versed in the world of bar pizza, I’d have to say Kuban achieved his goal. The pizza is SUPER crispy, the type of extra-thin crust that’s still solid enough so that you can easily pick it up and eat a full slice sans folding. It’s cooked just before the point of being burnt, so that there are orange-y strands of crispy cheese clinging to the edges, with just a few spots of charring throughout.

This isn’t the type of pizza that’s going to draw flocks of food critics to Fulton Street. Rather, it’s the type of simple, well-made cheesy pie that would inspire cries of devotion at a bar around 2am–which brings up perhaps Margot’s only flaw–it’s only served at brunchtime. Correcting that mismatch, the $25 ticket allows for you to trade in your salad course for any drink from Emily’s cocktail list, not a bad pre-pizza idea.

Emily’s by the way, recently launched a weekday lunch menu, served Wednesday to Friday, which is welcome in a nabe with not much great daytime dining. Their lineup of pizzas is matched by a roster of sandwiches served on homemade, wood-fired bread, including a Surry ham Croque-Monsieur with melted fontina, and a “noht mi” featuring Brooklyn Banger sausages. To put your name in for the next pop-up, visit margotspizza.com, where you’ll also find more information on bar pies.

Leave a Reply to Ken Marino