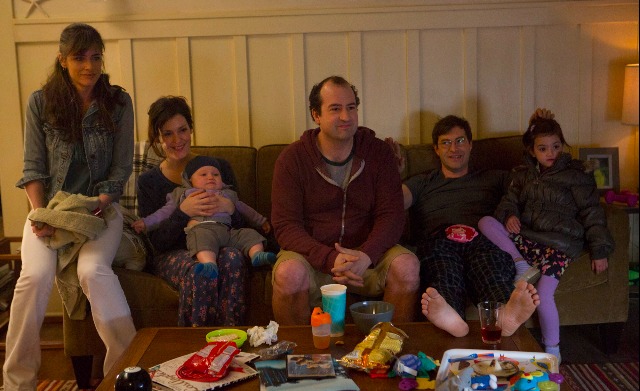 American film is filled with famous, filmmaking brothers–Albert and David Maysles, Peter and Bobby Farrelly, Joel and Ethan Coen, and lately, Jay and Mark Duplass. The two have been getting a lot of well-deserved attention because of their new HBO series, Togetherness, which I gushed over in our winter TV roundup.

Mark is the more recognizable of the two, the star of sci-fi-ish indie flicks like Safety Not Guaranteed and The One I Love, and the show “The League.” We’ve seen Jay less often on screen, a holdover from their childhood days of filmmaking, when he had the upper body strength to lift the camera for longer periods, according to their own backstory. For fans of the Amazon show Transparent, though, Jay’s become very familiar as Josh, the sole brother in the Pfefferman clan whose difficulty in sustaining a romantic relationship can be traced back to a babysitter who slept with him as a tween. It’s the kind of dysfunction that gives you the shivers, even though the show just won a Golden Globe for “Best Comedy.”

In a year, I predict Togetherness, which is also set in L.A., will walk away with the same award, only it will be more deserved. Mark plays Brett, a straight-laced husband whose relationship with his wife Michelle (Melanie Lynskey), a stay-at-home mom with a master’s degree, is flailing. Amanda Peet is Michelle’s sexy older sister Tina, an unhappily single woman who is relocating her bouncy-castle business from Houston, and Alex, played by Togetherness co-creator Steve Zissis, is Brett’s best friend and refuge, an out of work actor who gets evicted in the first episode. (If at the end of episode one you’re still not impressed, give it one more chance. There is a bedroom scene in episode two, waiting for you to laugh out loud to.)

Alex and Tina are trying to reboot their lives while crashing at Brett and Michelle’s house, but rather than add more strife to the cooling marriage at the heart of Togetherness, they are a much-needed distraction and import their own sexual tension into the L.A. bungalow. Tina operates on a sliding scale between self-aware and oblivious, but is wholly sympathetic and fun to watch. Alex is her patient “bitch,” the nice guy who is never seen as anything but a friend, holding out everlasting hope that she will come around to him. Tina acknowledges his fate in the first episode when she asks Alex for some fashion advice. “If you were a guy…” she begins. “Wait,” he says, “if?”

They’re not sidekicks–that would be too much like Entourage, or Girls, the kind of grown-up Friends comedies that HBO does so well. But they are the comedic glue in a show that could quite easily fall apart if it hewed to its familiar storyline of a couple, post-kids, going through a sexless lull.

Instead, Togetherness is the odd comedy that is both ridiculous and emotionally resonant at the same time. It is filled with awkward moments during sex, awkward moments that might lead to sex, and awkward moments that lead to sex with people the characters shouldn’t be having sex with. And also one of the best Face Timed, bad mushroom trips in the history of TV. For all of its very familiar tropes, it doesn’t always arrive in the places you expect it to. In fact, it often deviates. It acknowledges that passion in a marriage can’t always be rekindled with kinky foreplay, and that sometimes the richest man wins. And it helps, certainly, that it is performed by a stellar cast.