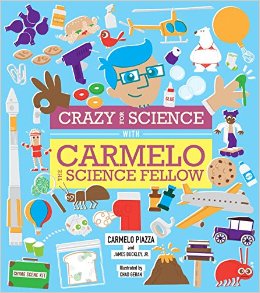 If you’re a Brooklyn parent, you know Carmelo the Science Fellow as a local, real-life Mr. Wizard, the founder of frequently sold-out science workshops at his “Cosmic Cove” and the director of the Brooklyn Preschool of Science.

For the rest of the world, and anyone who has failed to register their child for one of his camps (myself included!), you can now become familiar with Carmelo Piazza as the author of Crazy for Science with Carmelo the Science Fellow. The book, co-written with Jim Buckley, is filled with science experiments that you can try at home, in the dead of winter, to undo the damage you’re wreaking on your children by letting them watch way too much on Netflix, or to simply introduce something new and useful to your cooped-up-inside routine.

There are nearly 40 experiments in this colorful volume published by the children’s imprint of powerHouse Books, pow!, and illustrated by Chad Geran. All are categorized by the various fields of science they explore, from biology to engineering, and for the most part they call for things you already own.

I was shocked at how many materials I actually had on hand, but over the years our house has become a crafting pop-up shop, filled with supplies I never imagined I would own, like cardstock paper. This came in handy for the “World’s Strongest Cardboard” experiment, in which we taped a piece of cardstock into a column, then stacked books upon it to test its remarkable strength. Just a week earlier, these sheets of paper were cut and folded into Valentine’s Day cards, but now, rolled into a cylinder, and standing straight up on the table, it was able to withstand first a Harry Potter tome, then The Goldfinch, followed by What is the What, and one more thick hardcover, before it toppled over. Everyone in the audience—my 6-year-old, 3-year-old and myself—was impressed.

Another great experiment involved vegetable shortening, something I didn’t mind sacrificing in the name of science. The cheeky name of this experiment was “Fat is Where it’s At,” and its purpose was to test the power of fat by exploring how it insulates polar bears against the freezing cold waters they swim in. Like all of Carmelo’s inquiries, it was peppered with jokes and factoids, like how a polar bear’s paw is as wide as a ruler—bits of information that add even more awe to the main event. My children stuck their hands first into a bowl of ice water to see how long they could stand it (not very), then slid their hand into a sandwich bag, which they then stuck into another plastic bag stuffed with shortening. Armed with this fatty glove, they dipped their hands in the water again. Was it cold? Not at all!

So far there have been a few duds in the book—activities that didn’t deliver the same wow factor, or fell flat. But this winter shows no signs of ending early, and we have many more experiments to perform.

Carmelo will be powerHouse Arena in DUMBO this Sunday, Feb. 22 from 3-5pm, to perform some of his experiments from the book in person and at the Old Stone House in Park Slope on March 15, noon to 2pm.