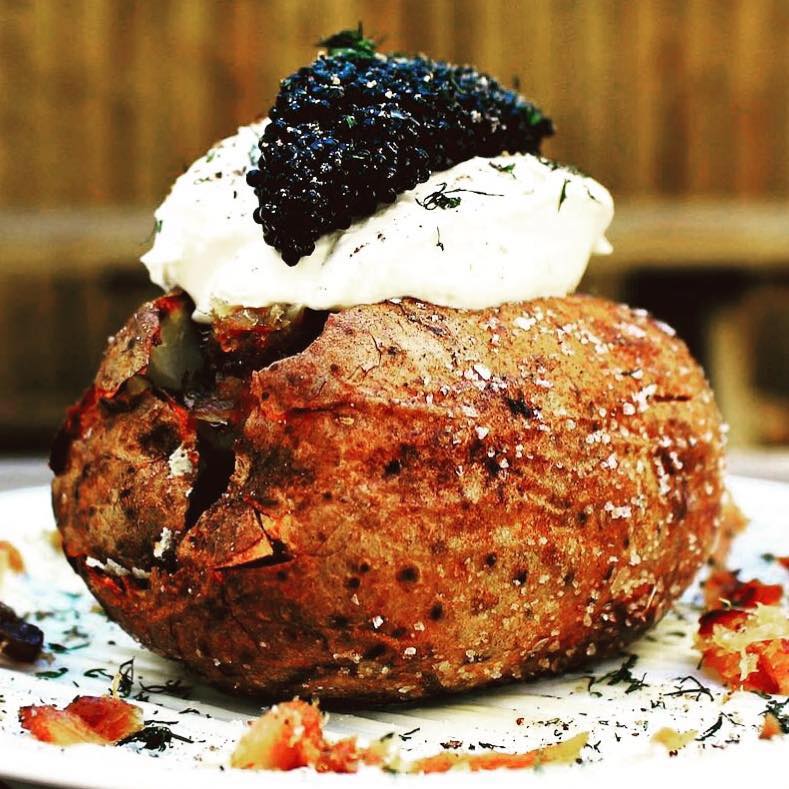 The garden level of a red-brick residential building on quiet Grand Street in Clinton Hill is the unlikely home to one of Brooklyn’s tastiest, and most under-the-radar new eateries. Set back from the street and down a short flight of stairs, Mekelburg’s is about as unsuspecting as it gets–if you do happen to notice it from the street, it doesn’t come off as much more than a fancy bodega.

“Some days we have people who live across the street coming in and saying, ‘I never realized you were here,'” says Alicia Mekelburg, who opened the new spot with her husband Daniel this summer. “Then we also have people from Manhattan coming out here and asking ‘Is this the place with the potato?'”

We’ll get to the potato shortly.

The couple founded the NY Bite Club underground dinner party series nearly a decade ago, well before every New Yorker and their grandma was serving pop-up tasting menus out of studio apartments. The Bite Club quickly cultivated a following for the couple’s creative cooking, despite the fact that neither is a trained chef.  “Our dream,” though, “is to own a brownstone and have a restaurant on the first floor,” Daniel Mekelburg told Grub Street back in 2007, and they have pretty damn near achieved said dream, opening Mekelburg’s around the corner from their Clinton Hill home.

Behind the gourmet food store in the front, there’s a craft beer bar with table seating in back, plus a heated rear patio with picnic tables and a kitchen turning out plates well above your standard bar food fare. Mekelburg’s has a much better than average wine list, and in addition to plates from the kitchen you can get sandwiches, cheese and charcuterie. Like the supper club, the secretive-surprise ambiance at their new spot is by design.

“We’re in a city where everything is sort of in your face,” says Alicia. “Although I knew it would take a little bit longer for people to get to know us, we thought this was just more in keeping with the residential neighborhood. And honestly, it gives us a bit more of an atmosphere, having this sort of cave-like setting. People walk in and say, ‘Wow, I had no idea this was here.'”

Alicia has worked as a beer, wine and specialty foods buyer, and the new space is built on showcasing new and little-known delicacies, from the well-stocked cheese counter and ample array of charcuterie in the store, to the very impressive beer menu in back, ranging from far-flung finds like Maui Brewing Co.’s Vienna Waits For You lager to a dry-hopped beer from the acclaimed and reclusive brewer of Hill Farmstead in Vermont.

Oh, and about those potatoes. Big enough to be just about a meal on their own, Mekelberg’s serves salt-baked potatoes that come split open and stuffed to the brim with fatty goodness. The over-the-top porky version–filled with gooey raclette cheese and crowned by a hulking mound of slab bacon, plus plenty of sour cream and scallions–has earned the most buzz, although Alicia calls out their fishier variety as her fave. “I know the bacon potato gets a lot of press because…well, bacon. But honestly the black cod one–it’s like latkes on steroids.” Filled with slices of fresh Alaska-caught smoked black cod, this one is topped with creme fraiche, dill and an incredibly generous pile of caviar. Equal parts fancy and filling, it’s the perfect bar food for Brooklyn circa 2015. And, the smoked cod is only available at Mekelburg’s.

Battling the potatoes for gut-busting menu supremacy is their fall bisque, which comes with the ultimate dipping vehicle–a foie gras “oreo” lathers the silky delicacy between two ginger snaps, “like milk and cookies for adults,” says Alicia. Less outrageous dishes are just as tasty, ranging from small plates like sambal-butter roasted oysters to a serious Italian sandwich with mortadella, soppresata, hot coppa, speck and mozzarella. Dessert specials recently included a figgy croissant bread pudding, but the preferred post-meal binge here is stepping back over to their store and ripping open a super-chocolatey spiral loaf of babka.

The babka shows up again on their breakfast/brunch menu in the form of chocolate babka French toast. Also available in the mornings (starting at 8a.m. weekdays and 10a.m. weekends) is the rather epic MekMuffin–a brioche breakfast sandwich topped with an egg frittata, more of that thick slab bacon, Sriracha, cheddar, chives and creme fraiche. With a full lineup of coffee drinks, the sandwiches/small plates menu available at lunch, plus free wifi, Mek’s might be your new favorite daytime coffice too.

Mekelberg’s will debut a new winter menu shortly before or after Christmas, and the couple is also recreating their dinner-party ambiance with pop-up beer tasting dinners, inviting craft brewers to pour six beers paired with six dishes that recall menus from their experimental supper club meals, like a recent red beet ravioli with poppy seeds and pecorino. The next event will feature Brooklyn’s own Other Half brewery on Dec. 17, at $89/person, including tax and tip. And if you’re looking for a foodie-friendly Christmas gift, their cheese of the month club offers three half-pounds of “monger-selected” wedges each month. Or, send someone you love a chocolately babka.