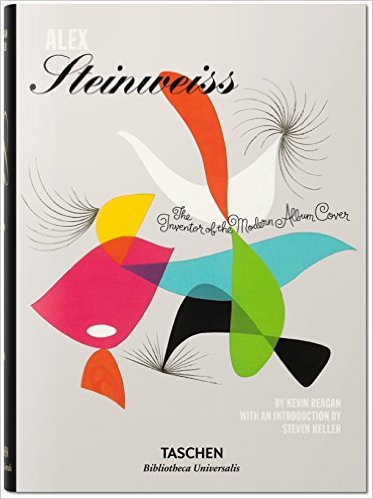 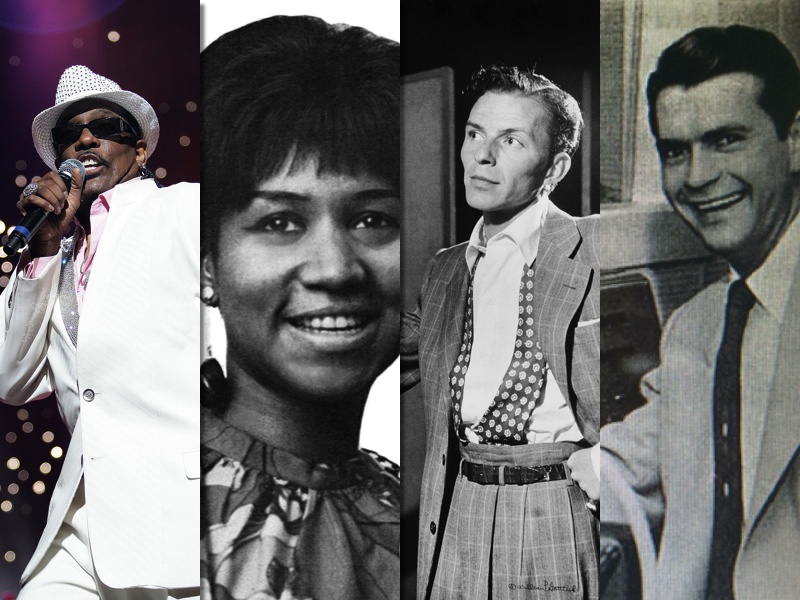 As far as music books go, this season has been outstanding with some heavily-hyped memoirs by the likes of John Fogerty, Elvis Costello, Patti Smith and Carly Simon. We previewed those and other books earlier this fall, but here are some other notable music titles that were published this year that shouldn’t be overlooked: from the age of Tin Pan Alley and the Great American Songbook, through the development of rock and roll coming out of a famous record label in Memphis, to legends like the Beatles, Michael Jackson, and Aretha Franklin. 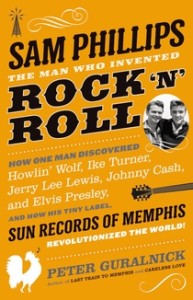 Peter Guarlnick’s name should be familiar to rock scholars, particularly when it comes to Elvis Presley. The author is the renowned expert on the King with the biographies, Last Train to Memphis and Careless Love. So it’s not surprising that his latest book has an Elvis connection in the form of Sam Phillips, the founder of the legendary Sun Records, which was Presley’s first label. Not only did Phillips signed the soon-to-be star from Tupelo, but he also had Carl Perkins, Johnny Cash and Jerry Lee Lewis on Sun Records. The Man Who Invented Rock ‘N’ Roll is an appropriate subtitle given Phillips’ importance in the history of the genre. 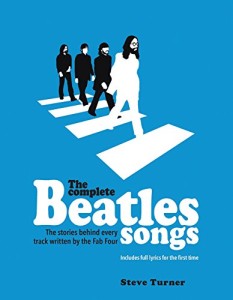 The Complete Beatles Songs: The Stories Behind Every Track Written by the Fab Four
By Steve Turner
William Morrow

In our previous roundup, we spotlighted The Beatles Lyrics,  which features handwritten lyrics of many Beatles songs. This book by Steve Turner does one step better with really in-depth stories as well as the lyrics to all of the songs the Fab Four ever released, including “Free as a Bird” and “Real Love”—the unfinished Lennon tracks that the surviving members worked on for The Beatles Anthology. Along with the recent release of the Beatles CD/DVD/Blu Ray set 1+, this book is a must for Fab Four fans this year. 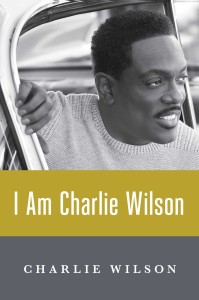 Charlie Wilson is one of the most important people in the history of ‘70s and ‘80s R&b funk music; his name is synonymous with the legendary Gap Band, who churned out a string of hits on the R&B charts, most notably “You Dropped a Bomb on Me,” “Early in the Morning,” and “Burn Rubber on Me.” His latest tome not only explores the success he and his brothers experienced as the Gap Band but also some of the rough patches in his life and career–including his battles with substance abuse,  poverty, and prostate cancer. 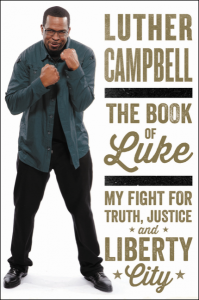 The Book of Luke: My Fight for Truth, Justice and Liberty City
By Luther Campbell
Amistad

Whenever I hear the name ‘Luther Campbell,’ I always think of two things from my high school years: 2 Live Crew and the censorship battles of the early ‘90s. Campbell is famous as the leader of 2 Live Crew, the rap group who drew controversy for its album As Nasty As They Wanna Be and the song “Me So Horny.” The notoriety of the group’s lyrics became a main issue about obscenity and free speech issue in music; another legal case involved Campbell and the issues of fair use and parody that went to the Supreme Court. The Book of Luke documents rapper’s life in Miami’s rough Liberty City neighborhood,  through the 2 Live Crew period, to his present career as a football coach at Miami Norland High School. 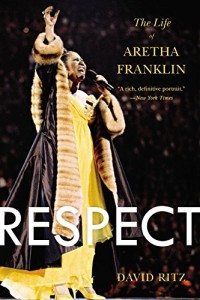 Respect: The Life of Aretha Franklin
By David Ritz
Back Bay Books

To work on a biography about the Queen of Soul would seem like a daunting task for any author, but not surprisingly David Ritz, who has written books about Marvin Gaye, Ray Charles, Rick James, and Buddy Guy, rises to the challenge with Respect, now out in paperback. This is not new territory for Ritz—he had previously collaborated on Franklin’s memoir From These Roots in 1999. His latest book on the legend is goes deeper and includes interviews with Franklin’s siblings, the late Luther Vandross, and Franklin’s famed producer Jerry Wexler. 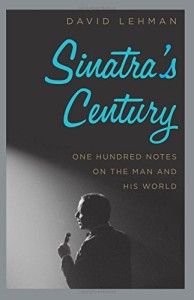 Sinatra’s Century: One Hundred Notes on the Man and His World
By David Lehman
Harper

This year marked the 100th anniversary of the Chairman of the Board’s birth. And while there have been many biographies of Frank Sinatra published, Lehman’s latest book uses a different tact by featuring 100 random short stories or vignettes that touch on various aspects of Sinatra’s life, career, and legacy. (One of the interesting facts mentioned in the book is the different yet prophetic words that could be taken from Frank Sinatra’s name, such as: art, sin, rant, rat, star.) While certainly not a complete biography in the conventional sense, Sinatra’s Century is an appreciation of perhaps the greatest entertainer of the 20th century. 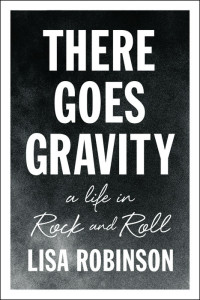 There Goes Gravity: A Life in Rock and Roll
By Lisa Robinson
Riverhead Books

Before Ann Powers, Evelyn McDonnell, Jessica Hoper and Maura Johnston became known in the music journalism intelligentsia , pioneering rock writer Lisa Robinson paved the way for future female music scribes. For 40 years, the NYC-based Robinson was right there meeting and interviewing many superstars in the rock and pop scene: Led Zeppelin, the Stones, Patti Smith, Michael Jackson U2, Kanye West,  John Lennon, and David Bowie. In her recent book, out now in paperback, Robinson recalls the moments she experienced while covering these legendary artists—you can’t get more inside as she did. 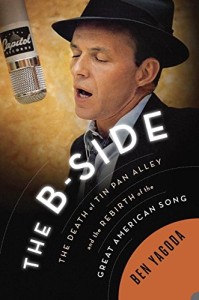 The B-Side: The Death of Tin Pan Alley and the Rebirth of the Great American Song
By Ben Yagoda
Riverhead Books

In addition to David Lehman’s somewhat abstract work, Sinatra also figures in this latest book by Ben Yagoda, exploring the period of the Tin Pan Alley, Broadway and Great Popular Songbook (Gershwin, Berlin, Porter) leading up  the birth of rock and roll. Yagoda’s music history book examines the factors that led to the popularity and decline of the American Songbook. The title also looks at the battle between songwriting publishing companies ASCAP and BMI and the rift between Columbia Records A&R man Mitch Miller and Frank Sinatra. Yagoda’s book also features interviews with the likes of Randy Newman and Jimmy Webb, who in their own way have carried the torch of the traditional popular song in the rock era. 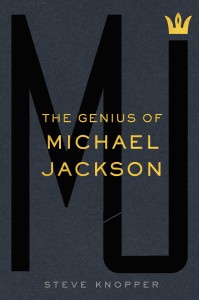 MJ: The Genius of Michael Jackson
by Steve Knopper
Scribner

In his latest book about the King of Pop, Steve Knopper, whose byline is familiar to readers of Rolling Stone, presents a straightforward account of Jackson’s life and music. Given that Knopper is known for his insightful Rolling Stone articles about the music business, it’s not that surprising that he would apply the same approach to telling the story about the man behind the legend. 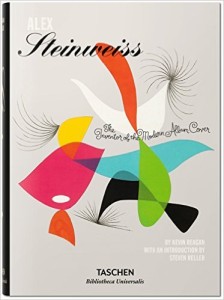 Steinweiss: The Inventor of the Modern Album Cover
by Kevin Reagan and Steven Heller
Taschen

Just as memorable as the music itself on vinyl is the accompanying album cover, and there has been plenty of them in the history of pop music: from The Beatles’ Sgt. Pepper and Pink Floyd’s The Dark Side of the Moon, to Bruce Springsteen’s Born in the USA and Kanye West’s Yeezus. Thus, the art of the album cover is the focus of three recent titles published by renowned art-house book company Taschen. The first one, Steinweiss: The Inventor of the Modern Album Cover explores the work of the late artist Alex Steinweiss, who, beginning in 1940 for Columbia Records, made record cover art visually striking. Naturally, jazz albums became known for its cool artwork and typography, aesthetics that are documented. in Joaquim Paulo’s book, spanning the 1940s through the 1990s. Paulo’s other book also showcases the sexy and righteous cover art found on the great funk and soul records especially from the ‘70s, including Earth Wind and Fire’s Spirit, Marvin Gaye’s Let’s Get It On, and Michael Jackson’s Off the Wall. These coffee table art books are something to behold for vinyl lovers. 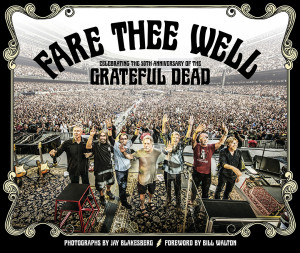 This past summer, the surviving members of the Grateful Dead–Bob Weir, Phil Lesh, Mickey Hart and Bill Kreutzmann—performed their last-ever shows together in Chicago, the city where the Dead last played onstage with the late Jerry Garcia 20 years ago. The moments from those gigs (which also featured Phish’s Trey Anastasio filling in for Garcia) were captured by photographer Jay Blakesberg in this new coffeetable photo book that will sure to bring back some found memories for the Deadheads who were there for those five memorable shows. With a foreword by NBA great and longtime Deadhead Bill Walton, Blakesberg’s book documents the poignant end of an era for a band that has been a cultural touchstone for half a century. 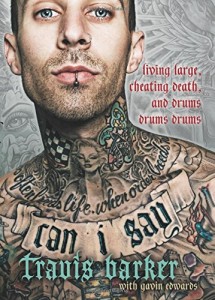 Travis Barker is best known as the drummer for Blink-182, as well as being the star of his own reality TV show Meet the Barkers. On the flip side of fame and fortune, Barker had his share of struggles, most particularly surviving a plane accident in 2008; his friend DJ AM, who also made it out alive from the crash, later died of an apparent drug overdose. Working with ace collaborator and Rolling Stone contributor Gavin Edwards, Barker tells his story from Blink’s early days and success, to his road of recovery from the crash. (A word of warning: there’s a photo of Barker taken right after the plane crash that is extremely graphic.)