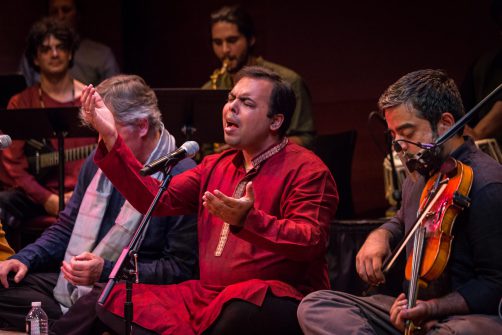 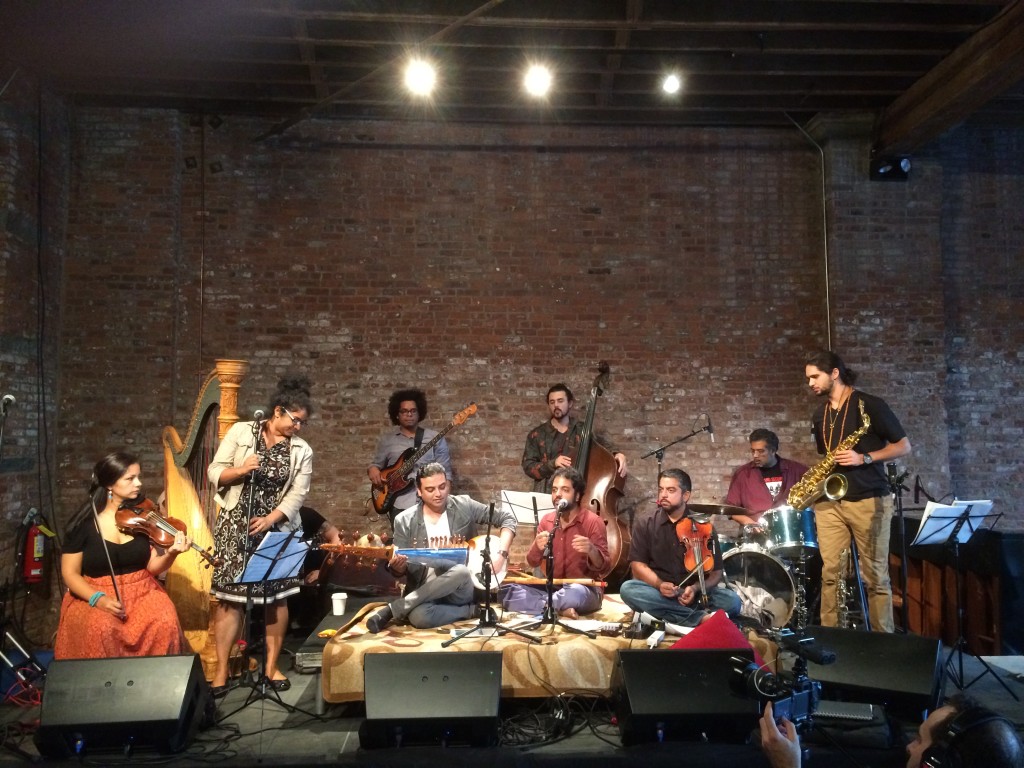 Forget the shoe gazers and folkies. The burgeoning hip hop artists and the sincerely bearded. Even the singer songwriters. Okay, don’t forget those Brooklyn music scene staples, but set them all aside for a moment to consider the possibility that the most exciting music in Brooklyn is happening Wednesday nights in Red Hook through the end of April. And you’re invited.

Brooklyn Raga Massive is in the midst of a three-month residency at Pioneer Works, and every Wednesday night they start with a different set of themes or performers and end with an exuberant, all-comers jam session that may or may not end in a huge dance party.

BRM has become known for their high energy jam sessions, fusing traditional melodies with elements of jazz, rock, western classical and any other genre they can get their hands on. While they’ve been performing around New York City since 2012 this residency in Red Hook has allowed the group the space to add even more elements of dance and movement.

Raga means “that which colors the mind,” says Neel Murgai, BRM sitar player. The simplest way to translate the term, as it’s used in Indian classical music, is to call it a scale, but that really falls short. The music is built on a rage consisting of five to nine musical notes that are used as the basis of a melody, and played with sitars, tabla, and other instruments, and designed to evoke particular moods and feelings. Some musicians only use certain ragas at particular times of the year, and there are melodic parameters that musicians are expected to follow, but “artists are able to improvise and show a lot of personal input,” says Murgai.

BRM’s members met each other through New York City’s Indian classical music scene. They wanted a place where they could combine all of their musical interests, from rock and jazz to hip hop and electronic music, modeled after a jazz jam session. They couldn’t find one, so undeterred, they created their own.

Their first event was in 2012 at the Branded Saloon in Prospect Heights, and has since expanded to various around the city. The format, which they still use today, starts with a performance by a featured musician or organized around a specific theme, followed by an extended jam session where anyone can join in, no matter their familiarity with Indian classical music–the actual music roams far and wide and the instruments do not have to be raga related. The jam sessions were an immediate hit that spawned weekly performances at various venues around the city, encouraging all manner of musicians and audience members with their welcoming vibe. Murgai marvels now at how even “musicians from India said they can’t find a community like this, a scene so open, non-competitive, and inviting.” 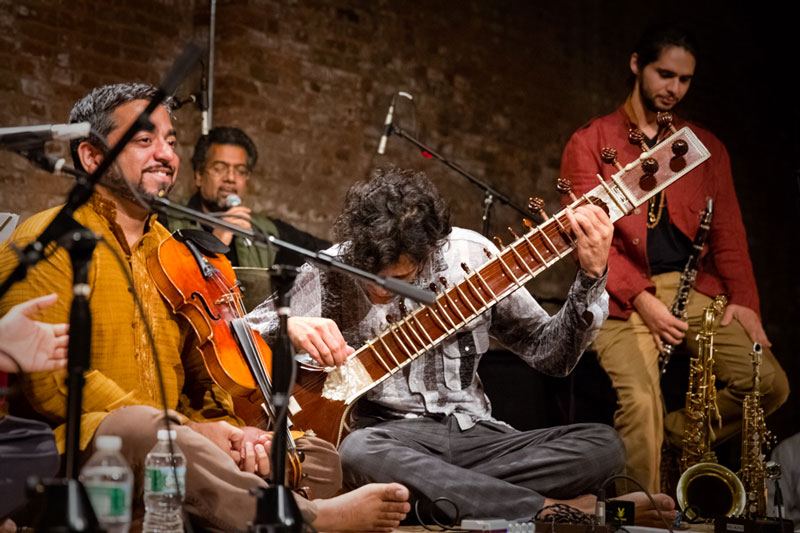 That same year, one of their members was invited to perform at Pioneer Works, which led to events for the whole group, including a John Coltrane night, and another they called Raga Chamber Jazz. They were so successful that Pioneer Works invited the musicians into the current residency program, which is usually reserved for visual artists. Pioneer Works provides practice and performance space, as well as a whole new community of fellow artists and audience members. Upcoming shows at Pioneer Works include nights devoted to raga and film, raga and rock, a celebration of Ravi Shankar’s birthday, and of women in Raga.

The group’s inventive combinations are not limited to music. The night I attended featured a trio of dancers blending ballet and Indian traditions to with the sounds of instruments ranging from violins to sitars. The first dancer wore bells on her ankles which acted as both her beat and duet partner. Another piece incorporated performance art, as the group based their movements around readings from Indian newspapers that eventually ended up on the stage, the dancers, and around the room. It got even more lively when the trio smeared newspaper ink all over each other. Another favorite included tap dancer Dormeshia Sumbry-Edwards whose shoes and moves added their own built in rhythm. The interaction between the drummers and Sumbry-Edwards was electric, each beat alternately in competition and in harmony with each other.

In addition to another month and half of great performances in Red Hook, there’s a lot coming for the group. They just finished Indiegogo campaign and are continuing to raise money to cover 60 concerts a year, and launching a video blog series called a Raga Renaissance, which features comedic moments during rehearsals, interviews with the band, and with visiting musicians.

BRM is also working with Northern Spy Records to release an album of their performance of Terry Riley’s In C and hope to expand their educational series and classes at Pioneer Works and other venues. In short, they’re aiming for nothing less than what Murgai calls “a worldwide raga massive takeover.”

BRM performs at Pioneer Works in Red Hook at 8pm every Wednesday night through April; tickets are $10 in advance, $15 at the door.