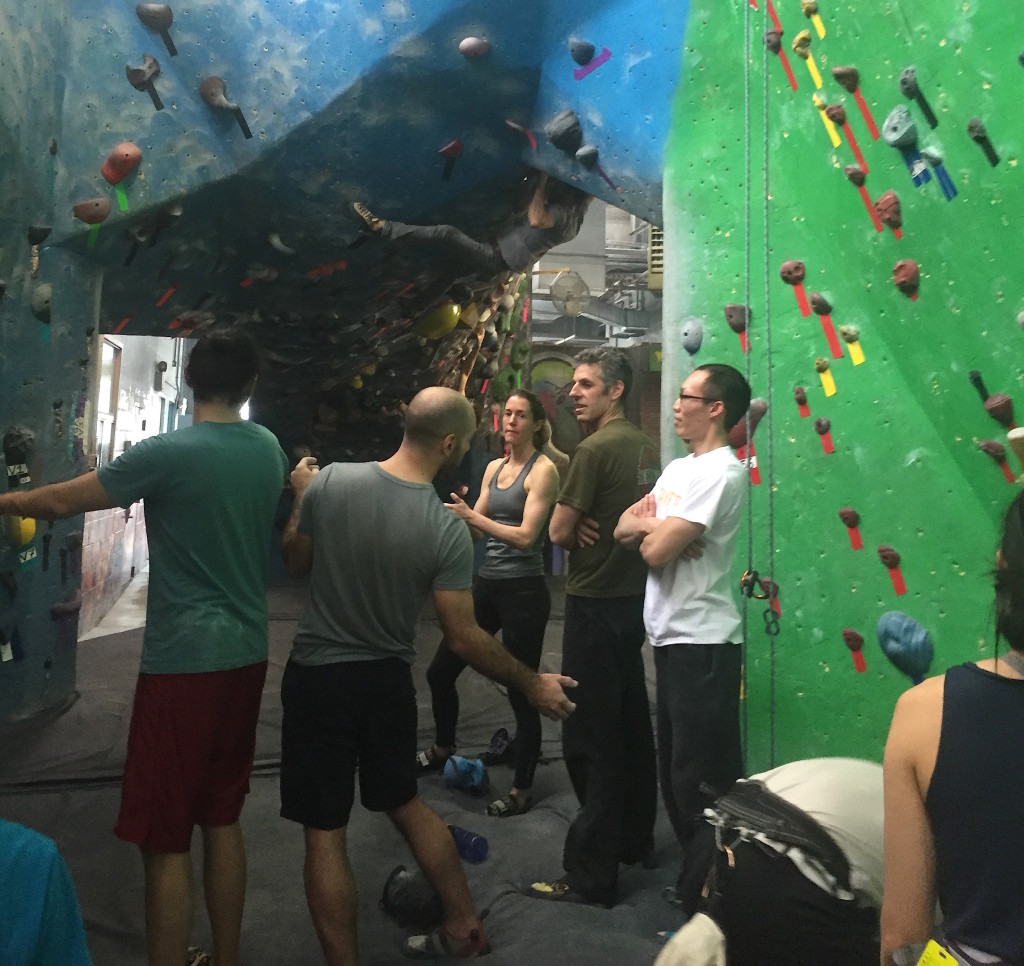 Heading to the gym and hopping on a treadmill or the elliptical machine for your workout is so early aughts. These days a fitness routine also doubles as a hobby, a community and, in some cases, a belief system. Rock climbing gyms are joining yoga studios and Crossfit boxes in the destination fitness niche in Brooklyn, and whether it’s because of the ready availability of large spaces and former warehouses, or the built-in clientele, like craft cocktails and high-end pet supplies, they’re popping up in some of New York’s most rapidly gentrifying neighborhoods.

Later this spring MetroRock, a rock climbing gym with three locations in New England, will unveil a hand- and foothold studded climbing wall on Starr Street in Bushwick. The facility will feature 50-foot walls, bouldering, lots of natural light and “an airy, open feel,” said Pat Enright, MetroRock owner, over email. There’ll be a fitness and yoga studio and retail store, too. “We think our location is in an area that has a huge potential,” Enright says. 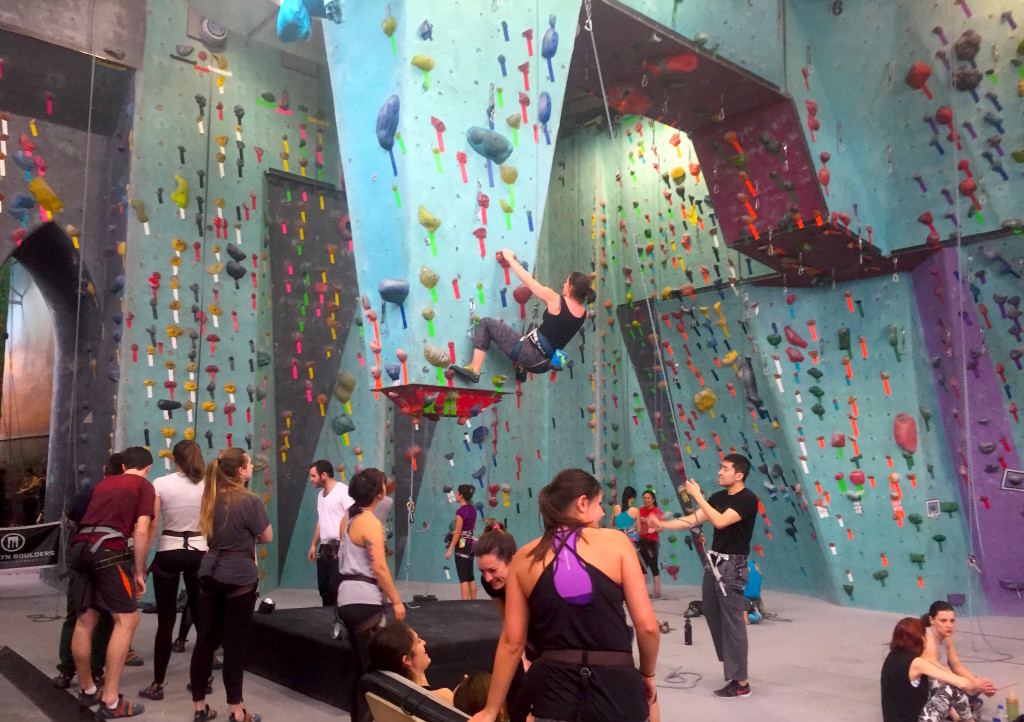 This will be MetroRock’s first Brooklyn location, and they picked Bushwick for its, “great and growing demographics,” and convenience to the L train, Enright says. MetroRock will be the anchor tenant for the property, and the developers are also opening another high-end food court in the space, so you can grab this month’s hottest fried chicken sandwich or artisan ice cream flavor after your workout.

Rock climbing’s explosion as a popular sport began about a decade ago, Enright says. Its appeal was once constrained to daredevil outdoorsy types, but rock climbing gyms have made it more accessible, especially for urban fitness fans with disposable income at the ready.

And people love it. Although you are climbing individually, rock climbing is also a social activity (after all, someone has to hold your harness). “It’s not awkward to have a conversation with strangers because you’re both just trying to complete the same thing,” says David Wauhop, assistant operations manager at Brooklyn Boulders in Gowanus. As you follow the colored and labeled routes to reach the top of the wall, you’re having fun and “you don’t realize at the same time that you’re working out.”

BKB opened in 2009 in a former New York Daily News distribution warehouse with Babson College alums Lance Pinn, Jeremy Balboni and Stephen Spaeth at the helm. “Brooklyn is such a nexus of different cultures and backgrounds that it seemed like a very wise place to create a climbing facility hoping to be more than a climbing facility,” says Wauhop, gesturing to the communal workspace and cafe, birthday parties and yoga classes. They now have climbing gyms in Sommerville, outside of Boston, and in Long Island City, Queens as well.

The inconspicuous 20,000-square-foot space sits on the corner of warehoused-lined streets, and is distinguishable only by the constant stream of people clad in workout gear entering and exiting. Once inside, visitors are hit with the sounds of indie rock and lively chattering from friends and families. 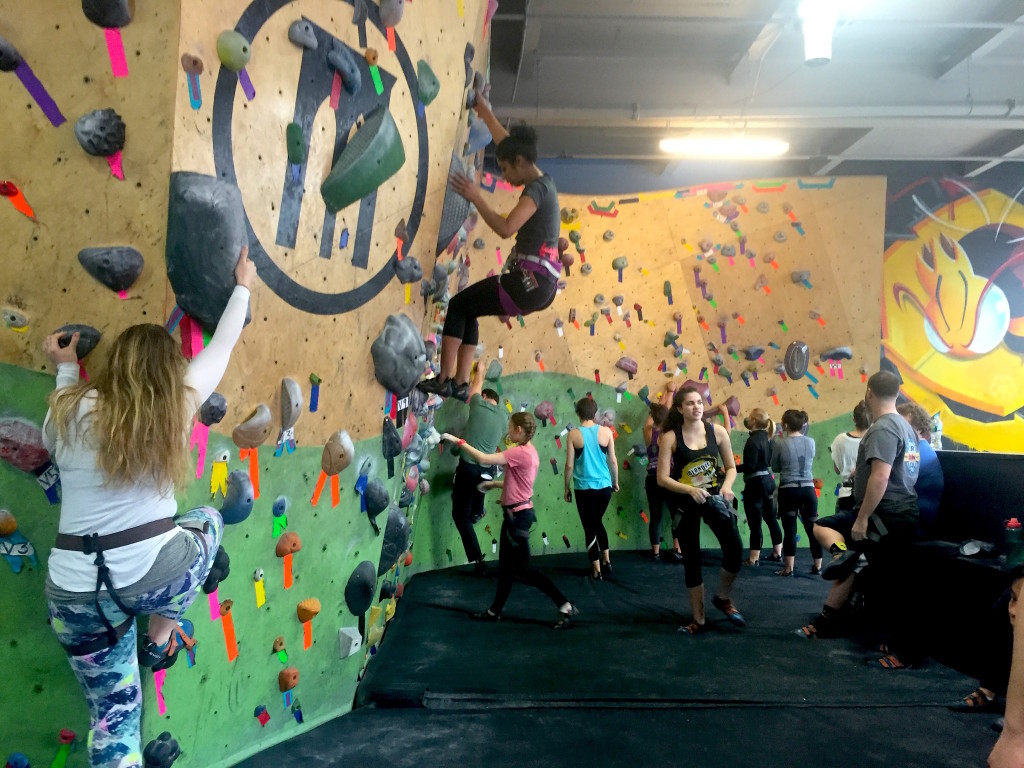 Climbers report a feeling of community you don’t get from a regular gym. Photo: Kathleen Wong

The real stars of the show are the 30-foot tall gray and teal walls that arch and curve. They’re decorated by brightly colored hand and foot holds. Climbers in harnesses scale them, clouds of white chalk poofing from their hands. In Brooklyn, a visit costs $28 for the day, or $115 per month. MetroRock has not released its Brooklyn rates yet, but the Boston location costs a comparable $22 per day, $85 per month.

Wauhop calls BKB “very much a product of its neighborhood and its people who come here consistently.” The popularity of BKB is due, at least in part, to the area being densely populated by younger people, he says. BKB sees climbers from age five to age 50, and millennials are an influential, but not exclusive part of what’s driving rock climbing, he added.

On a recent weekend afternoon Cliff, a rock climber of several years, was visiting BKB with his wife Kim and their son.  He says that rock climbing is a culture of friendly and collaborative people. Rock climbers like to solve problems, he says.

Several avid climbers made the case that the sport appeals to a wide swath of athletes and performers. “We love to do very many different things, like we all enjoy rock climbing but some of us are dancers, some of us are yogis, some of us are trapeze artists, and the challenge is there’s not enough space to put everything we want,” Wauhop says about BKB, which is working on installing a new fitness section in the back room this year. “But it’s better than it’s ever been.”

In Bushwick, the neighbors echoed that sentiment in their anticipation of MetroRock’s opening.

“As a venue dedicated to physical art and aerial circus performance, we are super excited to have a new place so close to us where we can play, train and be inspired,” said Kae Burke from House of Yes, a performance art space in the neighborhood, in an email. “We are beyond happy about this.”