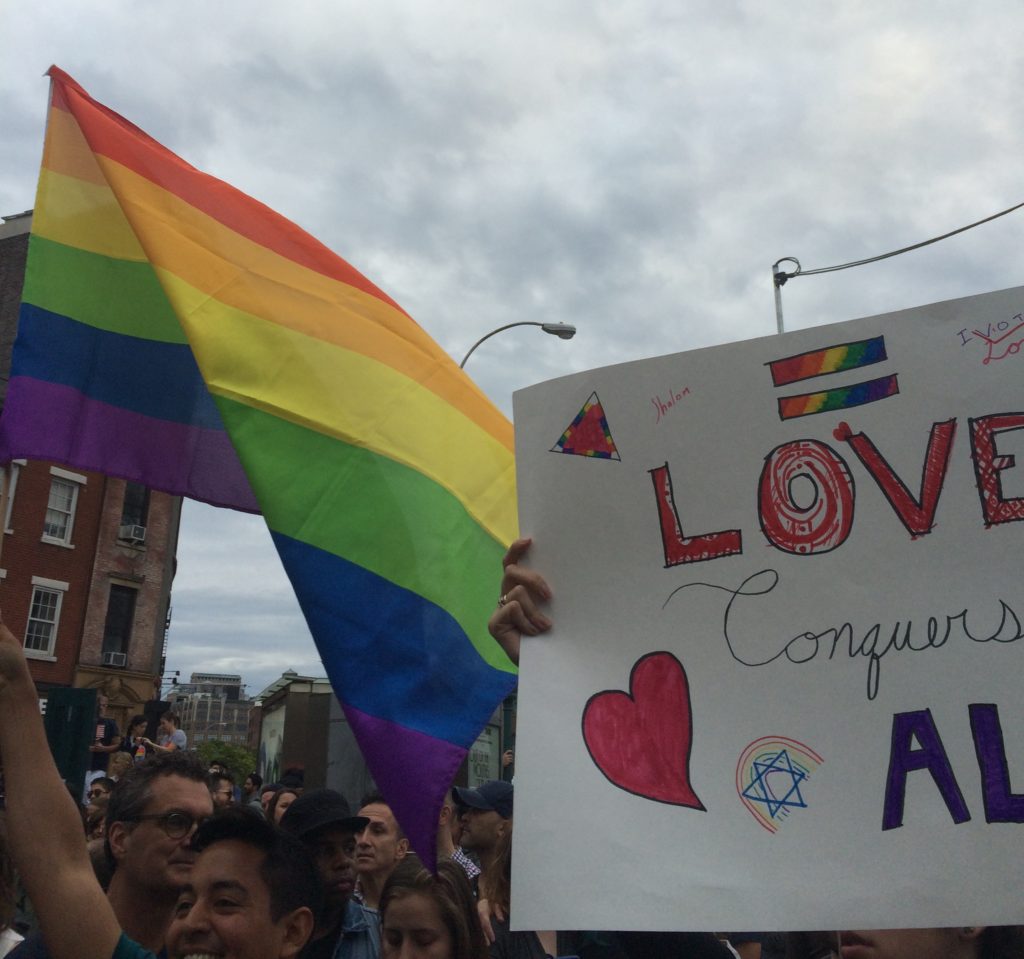 The heart beats to animate the body; we call this human rhythm our pulse. It is no coincidence that I can’t stop thinking about heartbeats. How subtle a heartbeat is, how it quickens in love, and in fear. I think of how love and fear are related, especially growing up a queer person. When I was young and coming out I didn’t want to be defined by my queer identity. I might avoid a pride parade because of fear, or self loathing, or because I feared love. I think about the very first time I came close to a woman in a gay bar. Manray was a sprawling three-room gay bar in Cambridge, Massachusetts. I remember how the music was pulsing, how my pulse quickened when she reached out her hand to me, and the lights were dazzling, and the men were wild and sweating and dancing like the gorgeous creatures they were, and the fog machine had a slightly sour but dizzying smell. I think about how my pulse revealed me. Then I imagine 49 hearts that have ceased beating.

I think about how blood is everywhere. It is inside us, pumping through us. It is the river of our living, until it is leaking out of us. I’m imagining the massacre on June, 12. I’m still uneasy using the word massacre.

1. Noun – an indiscriminate and brutal slaughter of people.
2. Verb – deliberately and violently kill (a large number of people).

It was to massacre, but perhaps it wasn’t a massacre? The shooting wasn’t indiscriminate. It was at a gay bar. I’m at the restaurant where I work when I read the Facebook post from the club that night: If you are at Pulse get out and keep running. And I start crying silently in front of customers who do not notice or choose not to react.

A shootout in a bar happens. Blood is everywhere. There are holes in every body. I turn the TV off, and listen for the wind.

After 10 hours of refilling wine glasses and telling people the specials I return home. It’s late and I think I’m still in a kind of shock about the shooting so put on a show and pick up a book. My mind is racing. Forty-nine beautiful hearts, still. I have to shift my attention so as to not get caught in the imagining of the terror the people who were in the club felt. What it might have felt like to pretend to be dead, next to someone you love, what it might be like to watch them die. But then, I think isn’t this the important work of living? Isn’t imagining how we learn to identify with each other?

But it’s too painful and I’m going to need to sleep. I flipped on Daredevil, a Marvel Comics television show. I read the Harry’s Bar Cookbook until my eyes start to feel weary. Often I need two elements to distract me from my thoughts. Susan is asleep on my shoulder. I close the book and settle into watching the show. Men are shooting at each other. A shootout in a bar happens. Blood is everywhere. There are holes in every body. I turn the TV off, and listen for the wind, which has, since I was a small child, been a source of comfort to me.

The night after a man with a Sig Sauer MCX .223-caliber rifle and a Glock 17 9mm semi-automatic pistol opened fire in Pulse, an Orlando gay bar, I laid awake all night listening to the wind whip across Brooklyn, listening to the yelps of a stray cat in the construction site down Atlantic Avenue, listening to the sounds of the garbage trucks, the birds faintly warbling to each other as the day broke, the shuffle of parents ushering small children across the street for the school drop off. I woke up the next day not just to the familiar rhythms of the world around me, the rituals of life that we all hold so dear, but to the presence of something larger, some element of our reality that feels unfathomable.

On my way to the vigil I stand on the train with an old friend. We are both on the verge of tears. They keep welling up inside of me. It feels like a reservoir of sorrow I keep trying not to sink into. I watch a man in front of me play a video game that involves holding a automatic assault rifle and shooting anything in the player’s path. Blood is everywhere. I think, he’s made a game of hell. We’ve made a game of hell. How have we become addicted to harming one another? I want to touch his arm and ask him why he plays at killing. What kind of personal suffering is being abdicated in the name of Resident Evil, Modern Warfare 2, The Shadow of the Damned?

On the train home I watch a man watch me and Susan. I don’t feel safe but I don’t feel scared exactly. I don’t know how to communicate, to ask what he feels. When we get home Susan says, I’m just not feeling safe. Could someone hate me because I love you? We turn on the TV. I don’t watch a lot of television, but I recognize something in me is trying to escape the pressure of reality. The first show is a comedy called Lady Dynamite, where she accidentally offers to do stand-up for a good cause called Open Arms, an organization that supports the right to bear arms. It’s satire and I appreciate it, but it’s jarring so I put on a detective show called Longmire. In the first five minutes two men walk through a forest and shoot at “anything that moves.” What moves is a woman who has just been raped and is fleeing for her attacker. I turn the TV off. How have we ever felt safe I wonder?

I commit to writing down every single time I see a gun. A gun has only one purpose which is to destroy life. It will not save you.

I start to consider the differing implications of seeing the image of a gun and interacting with real guns. I feel terror every single time I see a gun, a drawing of one, a representation of one in the media. I spend the day reading tweets from a Trump rally. They are full of hate and chaos. I read small profiles of all the victims of the massacre Sunday. They have soft friendly faces. One texts his mother and asks her to call the police while he plays dead. Another mother dies trying to protect her son. I see a post on Facebook depicting the same kind of rifle used in the attack. The caption reads: It took me seven minutes to buy this in Pennsylvania.

On the L platform in Williamsburg I see an actual gun. It’s in the holster of a police officer’s belt as he bends over to pick up something he has dropped. I commit to writing down every single time I see a gun. A gun has only one purpose which is to destroy life. It will not save you. It stands in the path of salvation. What is salvation? It’s not exactly a notion I connect with. But could it be simply the ability, the right to reside in love? If my heart beats then I am capable of love. If my heart stops then I am lost.

Several mornings after the shooting I pause to hold the elevator door for a stranger. Susan says, Oh I don’t think they want to ride with us. I let the door close and ask her why.
It’s not rational, she continues. But this is what I’ve been thinking since Sunday… People look at me and hate me because I’m gay. Here, I think, is the psychology of the hunted. I try to reassure her, somewhat foolishly by saying, Most likely people don’t recognize her as gay if I’m not around. She says, What? That’s not nice.

It occurs to me clearly for the first time that passing as straight has only ever been a means of survival. I think about the queer people who died or were injured in Pulse that night, who maybe never got the chance to know acceptance. A gay bar is where we hide and where we are free, it is where we reside in love. Thus is the paradox of the queer existence, to want not only acceptance, but to be seen and to be loved.

Loving is the only act. And in fact humans, contrary to how it might feel in the wake of the 49 magnificent souls we lost this month, are really good at it.

That first night in ManRay, when a girl kissed me, my life changed. It felt cellular. I had finally been seen and for a brief moment, while Cher blasted through the speakers and the disco ball spun overheard as assuredly as any good planet, I had been loved. The tragic and, albeit, comic element of this moment of my life was that I had self-medicated so deeply that night with cheap vodka tonics that after the kiss I promptly puked on the dance floor. It was mortifying. But I was done denying myself the love I knew felt right.

Love is the only thing that has the ability to remain unbroken. This pride weekend let’s not deny love. Together at the parade and the parties and crossing the street and at work and in the gay bars and holding hands outside Stonewall, let us be defined by it. Loving is the only act. And in fact humans, contrary to how it might feel in the wake of the 49 magnificent souls we lost this month, are really good at it. We are hardwired to love one another, and I’ll be the first to admit it can be scary at times. Choosing love makes us vulnerable. But choosing love is the only dance that will ever make any difference.