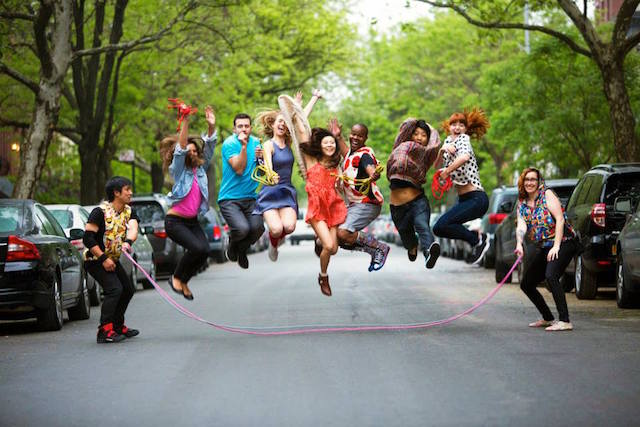 Welcome to another edition of Your Ideal Week, Brooklyn summer style. News flash: Still hot out. There are also still tons of ways to keep yourself entertained and occupied while staying local, starting with The Great Brooklyn Lobster Boil taking place this Sunday at The Landing in Industry City. The key thing to realize here is that ticket sales for this summer feast end at 4pm today, so you’d best get a move on if you want to end the weekend with a heaping plate of steamed lobster, mussels, corn on the cob, potatoes, salad and watermelon. The festivities will also include horseshoes, cornhole, beer for sale, and live music from The Loyales.

If live music is your thing, may we also suggest the Cruel Summer 80s Dance Party going down on Friday night at the Bell House? The Engagements, a totally kickass 10-piece band that is a BB favorite, will be covering all your favorite hits from the decade of excess starting at 8pm, and tickets are just $5 with the promo code “theskint.” Of course, if you’re cool like dat, you can also throw back to the 90s hip hop era at Celebrate Brooklyn’s free Digable Planets and Camp Lo concert on Saturday night in Prospect Park.

And, finally, if you are suffering from post-convention exhaustion plus a need to stay squarely within the reach of a decent A/C, you can always visit cooler temps and seemingly less traumatic political times at BAM, which is running a special election-themed movie series called Four More Years. Now through Tuesday, you can see classic policy wonk-focused flicks like Bulworth, Wag the Dog, Primary Colors, and The War Room on the big screen–check out the schedule here. Or, celebrate New York City and go see Ghostbusters.

Otherwise, we’ve got events for Seinfeld and Harry Potter fans, an art run, comedy, ice cream, and more coming at you this week–read on for more details and stay cool!

Thursday, July 28 Thursday calls for a trip to the Queens waterfront for a free outdoor celebration of everyone’s favorite sitcom about nothing. Starting at 6:30pm, Hulu and LIC’s Hunters Point South Park is hosting a summer night devoted to Seinfeld, which will include screenings of three iconic episodes (one of them is “Summer of George”) as well as a new documentary about the show’s superfans, an Elaine dance-off, organized frolf, character look-alike contests, and a menu inspired by the antics of Jerry et al (O Henry candy bars, anyone?). Alternatively, you can satisfy your sweet tooth at Brooklyn Screams for Ice Cream, a panel at the Brooklyn Historical Society featuring some of our borough’s top ice cream makers and samples from Ample Hills and Van Leeuwen. Tickets are $12 and the discussion starts at 7pm. 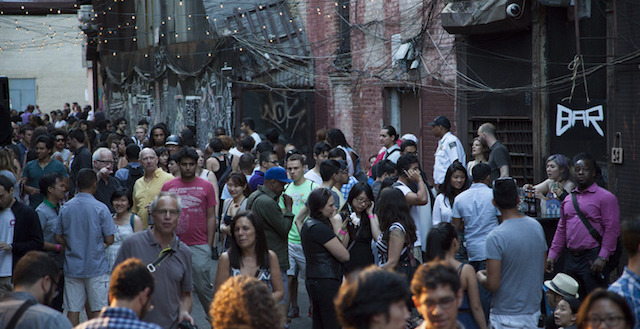 Friday, July 29 If you have never made it to Downtown Brooklyn’s Grove Alley on a Friday night in the summer, you have been missing out on some serious people-watching, not to mention dance beats, food trucks, and high-spirited, end-of-the-week revelry. This week’s installment of the popular party is called Glow because it involves light-performance acts, glow body paint artists, and black UV lighting in various sections of the alley. Although the fun officially starts at 5:30pm, we’re guessing that given the nature of this particular shindig, it’s only really going to get underway once it’s dark out. It’s all free, but we recommend that you register here, and you might want to bring cash to blow at the various beer and food trucks that will be on hand.

Saturday, July 30 Calling all Harry Potter aficionados: If you thought nothing of waiting in line all night for the latest edition of the saga to be released back in the aughts, you probably already know that the eighth story in J.K. Rowling’s epic series is set to drop this Sunday. Harry Potter and the Cursed Child, which is a new volume and also a play that will premiere in London this weekend, catches up with an adult Harry and his three children, one of whom is facing familiar struggles with the family legacy. To celebrate this latest installment, Word, Hypable.com, and Villain have teamed up to host an old-fashioned Midnight Release Party starting at 10pm on Saturday. All tickets, which cost $30 each, include a copy of the book to be handed out precisely as the clock strikes midnight, as well as Rosemerta’s Firewhiskey, a slice of Harry’s birthday cake, raffle prizes, trivia, and the chance to play Butterbeer Pong with a friendly crew of fellow Harry zealots.

Sunday, July 31 Sunday morning presents an interesting multitasking opportunity in the Bushwick Street Art Run, which allows you to get your weekend exercise in while simultaneously getting a dose of culture. The four-mile, easy-paced run will provide you with a tour of some of the city’s most colorful and visually-stunning outdoor murals, which pretty much guarantees that you won’t be plagued with mid-workout ennui. The group meets at 10am at Bhati Yoga in Bushwick, and your $20 ticket includes refreshments and a bag drop.

Monday, August 1 As a comedy podcast enthusiast, I have been enjoying Nick Thune’s work for years, but I’ve never been able to catch the LA-based comedian/musician/actor when he performing live. That changes this week, though, because Thune is doing a set at Union Hall on Monday night as part of his American Babe tour. Expect lots of dry, deadpan delivery and smart jokes. The show starts at 8pm and tickets are $15 each.

Brush up on your double dutch at Brooklyn Bridge Park on Wednesday night. Photo: Open Ropes

Tuesday, August 2 Scratch your creative itch on Tuesday night at Red Hook’s beloved Sunny’s Bar, which is now hosting regular figure drawing and sculpting sessions with live models on Tuesdays starting at 5:15pm and 7pm. You’ll need to bring your own materials, but $20 gets you an hour to work on your masterpiece and a complimentary glass of wine. You can reserve a spot by emailing mwambroise@earthlink.net or by buying a ticket at the bar after 4pm.

Wednesday, August 3 If you’re like me and the last time you used a jump rope was when the boy who tormented you in third grade stole yours on the playground and broke it, Open Ropes’ free public jump rope sessions might be just what you need to get back in the game. On Wednesday nights from 7-9pm, jumpers and wannabes of all skill levels can drop by Brooklyn Bridge Park’s Pier 2 for free instruction on the basics of double dutch. All jump ropes and lessons are provided for free, and the vibe is described as “a relaxed environment that resembles a neighborhood block party.”