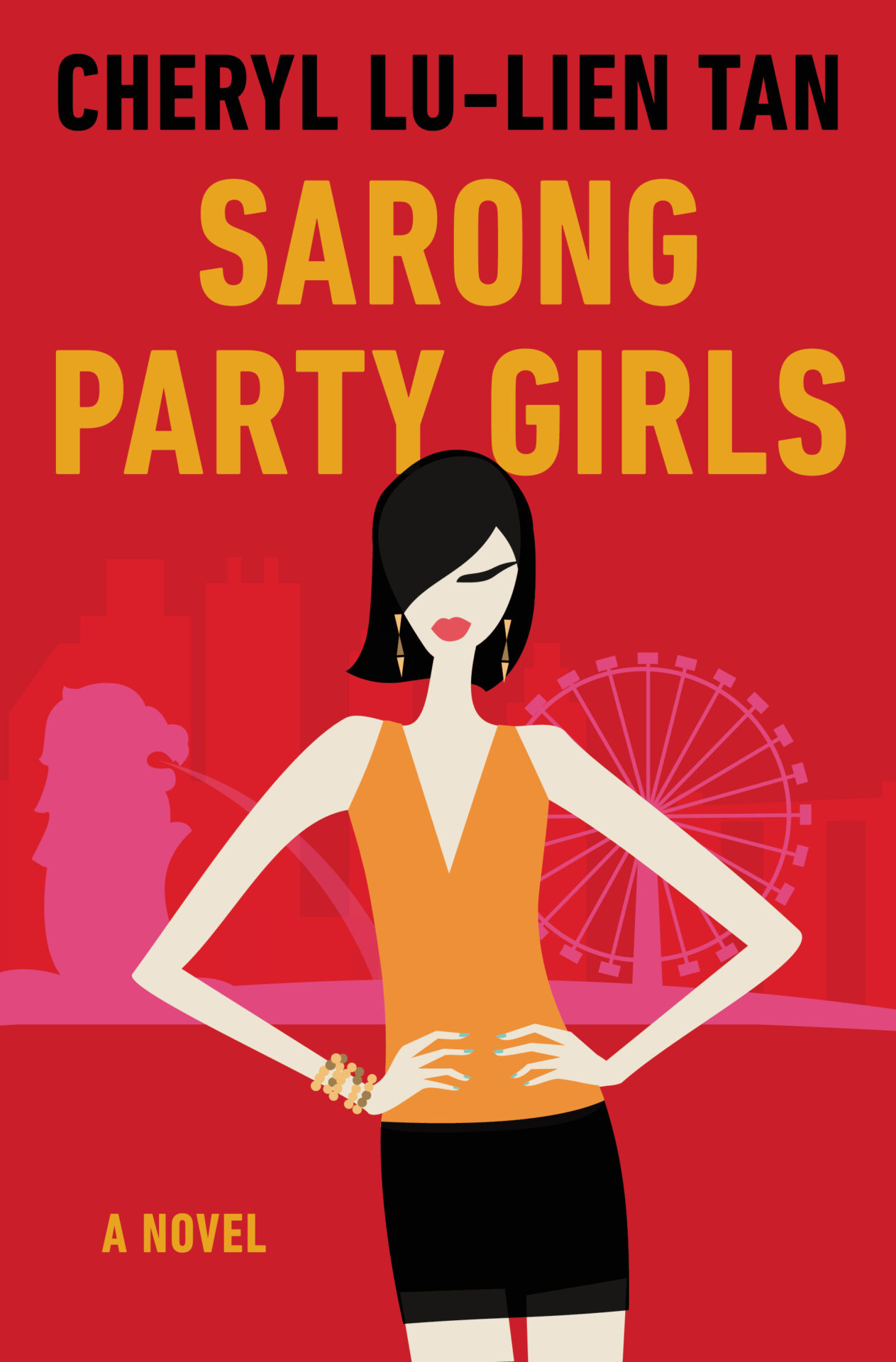 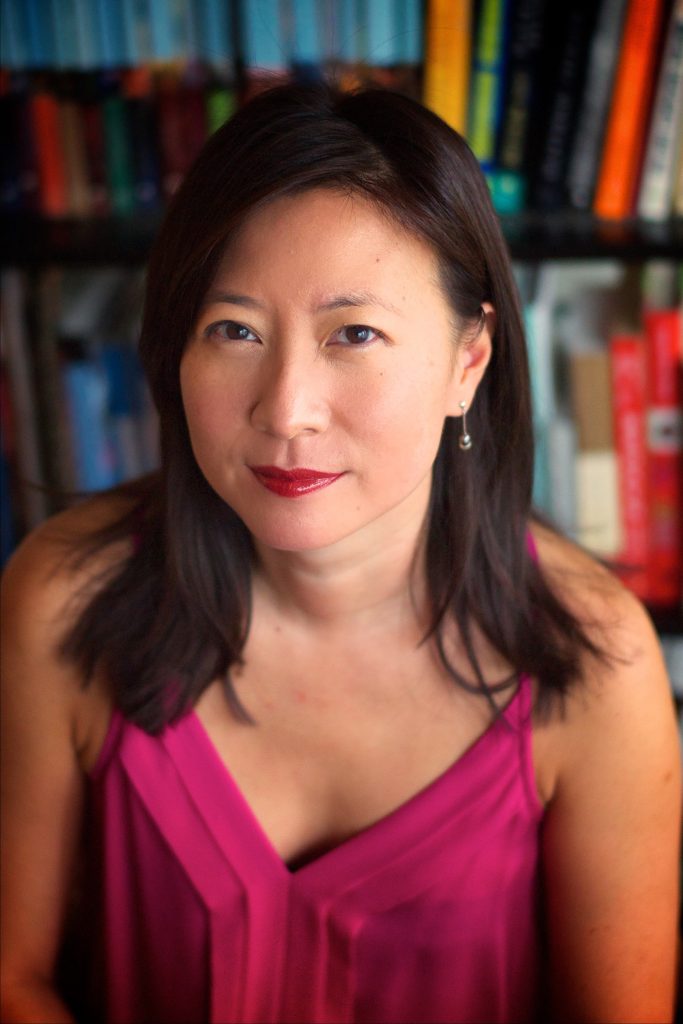 “If we don’t get married, engaged or even nail down a boyfriend soon—my god, we might as well as go ahead and book a room at Singapore Casket because our lives would already be over,” says Jazzy, the main character and narrator in Cheryl Lu-Lien Tan‘s debut novel Sarong Party Girls.

Jazzy is a twenty-something Singaporean on an urgent mission: to find a rich, white, ex-pat boyfriend (an ang moh) to marry and have a Chanel baby (half white/half Singaporean) with. As part of the hunt, she and her sarong party girlfriends frequently go to clubs where they are treated like VIPs, down drinks with abandon, and hook up with guys who may have potential. To the casual observer, Jazzy might appear to be a gold digger whose main concern in life is avoiding the fate of her former friend, Sher, a sarong party girl who eventually married an ah beng (a Singaporean man) and settled down. Through her adventures and mishaps with men both white and Singaporean, Jazzy explores the often uncomfortable mix of romance, status, and money in her world.

While Sarong Party Girls (published by William Morrow) is often hilarious, it’s also a sobering read as it raises questions about misogyny, gender politics at work,  class differences, and materialism. In addition, the book also gives the reader a sense of modern Singapore in showcasing the clash between old traditions such as the bustling wet market, where old-timers go buy fresh produce and seafood in outdoor stalls; and new ones, such as the hipster nightclubs that young people frequent. An essential ingredient to the authenticity of the book is Tan’s use of Singlish–a patois spoken by most Singaporeans that’s a mixture of English, Mandarin, Malay and other languages—which Singapore’s government is trying to discourage through its “Speak Good English“campaign. For Jazzy and her friends Singlish is the lingua franca of all informal spaces. It comes in the form of shared wisdom: “This matter of getting an ang moh husband–if we are smart–it’s best to try and fasterly settle.” And is also the language of their own thoughts:  “But then I thought about how chio I looked tonight. In my Seven jeans, my backside was super power!”

The vivid details as well as the language can be traced to Tan’s background as journalist and a native Singaporean. She arrived in America at age 18 to study at Northwestern University and later worked as a staff writer for The Wall Street Journal and The Baltimore Sun. Prior to Sarong Party Girls, Tan wrote the memoir A Tiger in the Kitchen and edited the fiction anthology Singapore Noir. The former Brooklyn Heights resident spoke to Brooklyn Based about the story behind her first novel.

What inspired you to write the book?

I’ve always been sort of fascinated with the sarong party girls in Singapore. When I was growing up I would see these bars…I would sort of peek in from the outside see these women in short skirts and high heels go in to meet Caucasian men. I’ve always kind of wondered what drives women like that to view status through the prism of race. So I’ve was always interested in this.

And then when I moved to the States, I would mention these SPGs sometimes to my friends. But it wasn’t until I was in Singapore researching Tiger, that I started to see this culture sort of bubble up again. During that time I reconnected with some of my friends who had gotten married in their 20s and then gotten divorced or were single in their 30s and had been hitting the clubs again. And if I wanted to see them or catch up with them, I would have to meet them at these bars and clubs. That’s when I saw this SPG culture all around us. So I started to observe and make notes and I thought it might make for an interesting story and maybe a book at some point. That’s how it kind of percolated.

How prevalent are sarong party girls? Is it a subculture?

I had to explain to people that not every Singaporean woman is a SPG. It’s kind of a derogatory term. Although, when I was researching Tiger, I was hanging out with my friends, some of them jokingly started to referring themselves SPGs—”Oh yeah, I’m dating a British guy. I’ve turned into an SPG” (laughs). It’s definitely a subculture and it’s not necessarily had a good reputation all along.

When I was sitting around with my friends, one of them who was dating a British guy said, “Well you know the ultimate goal is to have a Chanel baby.” And I’m like, “Whoa, what’s that?” “It’s a half expat/half Singaporean baby.” I thought that really summed up that culture of materialism in Singapore and how SPGs play into that a little bit. When she said that, I thought, “I’ve got to write this book.” 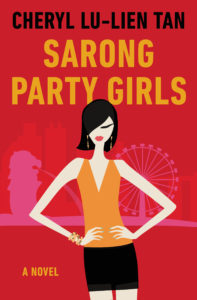 How much research was involved?

A lot of the scenes in there from the wet market to the neighborhood that she lived in, those are places in Singapore that I’ve been to and seen. I love the neighborhood she lives in and it’s one that reflects her life quite well, because she’s a woman who’s caught between two worlds—she sees this hyper-modern glitzy Singapore that a lot of the world sees—it’s dynamic, it’s fast paced. At the same time, she sees herself being held back by Chinese-Singaporean society, her parents are very traditional. So she’s sort of between those two things. A lot of the research was through observations, Some of the scenes are scenes from I’ve seen in the clubs, so I put them in there for color and energy.

One of the scenes in the book takes place at a KTV lounge in Singapore, which is an expensive karaoke place for rich men who are entertained by female hostesses. As a guy, I cringed upon reading what goes on there.

KTV lounges are all over Singapore and I’ve always been fascinated with the fact that they exist and that they’re so prevalent and that they’re so accepted. It’s part of certain business culture that men just have to go. For that I couldn’t research it in person because they don’t allow women in there generally. So I had to settle for interviewing my friend who did go. Some of the more even racy and lurid anecdotes are stories that I heard from my friends. I think that’s part of what I wanted to explore, the desensitization of this sort of sexism and misogyny.

Unlike other chick-lit novels where there is perhaps some dashing, too-good-to-be-true guy, the men in Sarong Party Girls don’t get a free ride.

At one of my presentations recently in Boston, [writer] Julia Glass introduced me and made a note of how the publicity materials referenced Emma, as “It’s like Emma but set in a modern age.” But she said, “It reminded me of another Emma–Emma Bovary.” In a sense I was thinking of Madame Bovary when I was writing this because of a woman who’s trapped in a society and she’s making the best of it, using what she knows and has. A lot of the books have a man coming in riding on a horse and trying to rescue you, but sometimes you have to rescue yourself.

Jazzy is such a very interesting character–she’s kind of an anti-heroine in a way. Was she based on anyone in particular?

She’s totally fictitious, but her voice is very much inspired by a few people–people in my life who have this very spunky energy that Jazzy has. They might not say some of the things she has, but they have the same kind of energy, that can-do quality. While she herself isn’t based on anyone in particular, I would say the positive qualities of her—I find her to be a very complex character. On the surface she’s very unlikable, but when you peel away the layers, underneath that, she’s a good and genuine person—someone who is entertaining and funny.

Certainly the most striking aspect of the book is how it was written in Singlish.

Singlish is something that’s been very dear to me for many years. In Singapore in school, we were taught proper English. Having lived in the States for more than 20 years now, I sort of speak American English here and Queen’s English when I go back. But among my friends or when you got to the wet market, that’s when you speak Singlish. To me, that’s the real Singapore.

Writing this in Singlish came naturally because to me Jazzy would be someone who would speak Singlish, she wouldn’t speak Queen’s English with her friends. That would be strange. It felt more natural to have her speak the way she would actually speak, as opposed to speaking American English or Queen’s English. That’s important to me because right away from the first sentence I wanted you to get a strong sense of who she was and where she is in society, where she is in that social strata, and where she’s coming from. And I hope that comes across.

The term SPG goes back to colonialism and is generally considered a stereotype. Has it taken on a new meaning these days, perhaps a reflection of female empowerment.

I guess it varies from SPG to SPG. Like Jazzy in the book her reason for being an SPG, she’s kind of a raging feminist. She sees this patriarchal society that’s she’s been born into that exists–this concubine culture–and she doesn’t want to be a part of it. She’s like I’m gonna make my own ticket somewhere else. She acknowledges that I’m not smart enough to be a doctor and do it that way or I’m not rich enough—I’m gonna do it the way I can, which is marry someone who is very outside of the world that I’ve grown up with. That’s her reason for being an SPG. It’s just who you meet and who you fall in love with. And you sort of get cheekily labeled as an SPG because your boyfriends are British. But for others it may be a status thing. I was also hoping to look at that a little bit in the book because the stain of colonialism is everywhere in the world. In Singapore, to some degree that may play a part in modern-day sexual and racial politics.

Being that this is your first novel, what has writing Sarong Party Girls meant for you both personally and professionally?

I’ve been really heartened by the fact that people outside of Singapore seem to be really intrigued by the Singlish. I was really worried about when I was writing the book… I feel heartened by the response and the embracing of it. My editor and agent are not Singaporeans, and yet they really got the story and really understood it. And just getting notes from readers and seeing some the reviews out there, and people who are discovering this world—it’s made me so happy. I’ve always wanted to write novels because I voraciously read Enid Blyton as a small child and since then have looked at books as portals to a completely different universe that you wouldn’t have access to in real life. And that’s what I hope to do with this book.