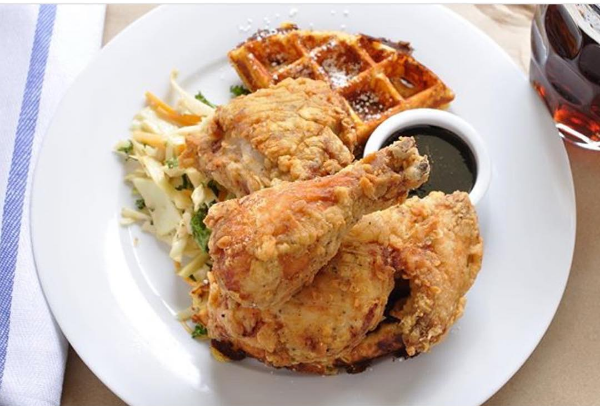 This week’s weather is just killing it, right? Blue skies, no clouds, and for the first time in a long while I don’t feel like I’m trapped inside the mascot suit at a pre-season football game in Alabama, so it’s already an Ideal Week in my book. But now what to DO with yourselves in these glorious conditions? Never fear–we got you.

Assuming next weekend is as pleasant as this one is meant to be, you’ll want to sign up now for our last Immersion of the season, which is happening on Saturday the 24th. This time we’re bringing our traveling pub crawl to Bed-Stuy, and your $25 ticket includes four beers plus lunch at hotspots like Do or Dive, Chilo’s, and Beast of Bourbon (or $15 for the beers only).

Other things to keep on your radar this week: the always great Eugene Mirman Comedy Festival returns to the Bell House and Union Hall with a few shows featuring top alt-comic talents that still aren’t sold out; the Brooklyn Book Festival is back; and Ample Hills Creamery and the Brooklyn Public Library have teamed up with other businesses around the country to celebrate Roald Dahl’s 100th birthday with special treats, super stories, and phizz-whizzing parties as part of Wondercrump Weekend.

There’s tons more to keep you busy too, and we’ve rounded up our best bets for each of the next seven days that comprise the Ideal Week ahead.

This Thursday night brings so many cultural activities to hit up that we can’t possibly choose just one. First up, St. Ann’s Warehouse reopens for new season and is kicking off its fall lineup with the world premiere of Taylor Mac’s 24-Decade History of Popular Music, a performance that The New York Times calls “a staggering magnum opus.” If a $400 ticket for the 24-hour marathon performance of the entire series taking place on Oct. 8 and 9 sounds a little beyond your grasp, you can pick up a ticket to one of the Individual Act Concerts for just $56. You can also head over to the Brooklyn Museum for the first night of the nine-day Brooklyn BEAT Festival, which features emerging local theater artists like Derick Cross, t’ai freedon ford, Elyzabeth Gorman, Ras Osagyefo, Gabriel Ramirez, and Hanne Tierney. Meanwhile, Jalopy Theater is celebrating its 10th anniversary with music from Marie-Emma Graves, Jack Grace, Karen Poliski, and Lord Youth starting at 9pm. Finally, Nitehawk Cinema is celebrating the 50th anniversary of one of the greatest true crime masterpieces of all time, Truman Capote’s In Cold Blood, with a one-night-only screening of the 1967 film adaptation of the book at 7pm. Themed T-shirts and cocktails will be available as well, and tickets are $16.

The Brooklyn Book Festival is back all weekend long, and this year’s lineup of all-star authors includes a bevy of big names like Margaret Atwood, Joyce Carol Oates, Salman Rushdie, Chuck Klosterman, and more. Kick off the festivities on Friday night at Greenlight Bookstore’s Seventh Annual Brooklyn Indie Party!, which starts at 7:30pm. The evening promises food, drinks, music, appearances by literary luminaries, free book giveaways, and, most importantly, the opportunity to show your support for the flourishing spirit of independent literature in Brooklyn.

On Saturday afternoon, Red Hook-based Raaka Chocolate is hosting a Raak the Block party to celebrate the neighborhood’s artisan community, which we all know is responsible for producing some really kick-ass food and booze. Some of that will be on hand for purchase, including Hometown Bar-B-Que, Solber Pupusas, desserts from Baked and Steve’s Key Lime, Other Half Beer, and Red Hook Winery wines. There will also be live music performances, free tours of Raaka’s factory, games, a bouncy house, and lots and lots of chocolate to enjoy. The fun starts at 2pm, and you can now get to this far-flung part of town via Citi Bike, which just installed a bunch of new stations along Van Brunt.

We’re coming to the end of lobster season, and if you didn’t get enough of it this summer, the Royal Palms has just the event for you: the Brooklyn Lobster Takedown. Starting at noon, you can try it prepared in a variety of ways by some of the area’s talented and innovative home cooks. Tickets are $35 and include a ton of food.

Even the perkiest ray of sunshine can feel undone by a particularly aggravating Monday, so it’s really the perfect time of the week to take the edge off by treating yourself to something really decadent. Cue the $38 Monday dinner special at the dependably delicious Buttermilk Channel in Carroll Gardens. You get to choose three courses (yes, that includes dessert) from a variety of options on the restaurant’s seasonal menu, but my money’s always on the legendary buttermilk fried chicken with cheddar waffles and savoy cabbage slaw. Indulge in a crisp glass of end-of-summer rosé along with your meal and I can pretty much guarantee that the looming workweek will suddenly seem much less daunting.

Hopsheads have the chance to dive deep into Japan’s microbrew scene at the second of two Fall Japanese Beer Tastings happening at Downtown Brooklyn’s Kimoto Rooftop on Tuesday night at 6pm. Your ticket, which costs $25 if you buy it in advance, includes a guided tasting of five rare beers from Japan’s west coast, a sampling of Asian-inspired hors d’oeuvres, and some awesome panoramic views. Alternatively, head to the Morbid Anatomy Museum in Gowanus for a special evening to celebrate Hal Ashby’s iconic 1971 film, Harold and Maude. Starting at 7pm, the macabre museum will be screening the dark comedy along with a short film entitled Solo-Me-O that explores the themes of death and aging with a similar sensibility. The evening also promises Harold and Maude-themed cake and cocktails, appearances from surprise special guests, a mourning costume contest, and more. Tickets are $25 each.

On Wednesday night, get your mid-week laughs in at a stand up show from the Comedians You Should Know collective at The Gutter in Williamsburg. The slate includes some of NYC’s funniest up-and-comer comics, like Liza Treyger (Comedy Central), Sasheer Zamata (SNL), Michelle Wolf (Late Night with Seth Meyers), Nore Davis (Comedy Central, Boardwalk Empire), and Jeff Steinbrunner (Vampire). Mike Lebovitz, who you might know from Last Comic Standing, hosts what is sure to be a great night of comedy. Tickets are just five bucks and the show starts at 9pm.

On the other hand, maybe you’re looking for something a little more relaxed? Pels Pie Co. in Prospect Lefferts Garden is hosting a flower arranging class in its backyard starting at 6:30pm. Alexandra Thune of Honeysuckle Hill Flowers will provide you with all the knowledge you need to choose and arrange flowers that will stay fresher longer, and when it’s all over you’ll have a gorgeous bouquet to bring home with you. Tickets include instruction and all necessary materials and are $55.