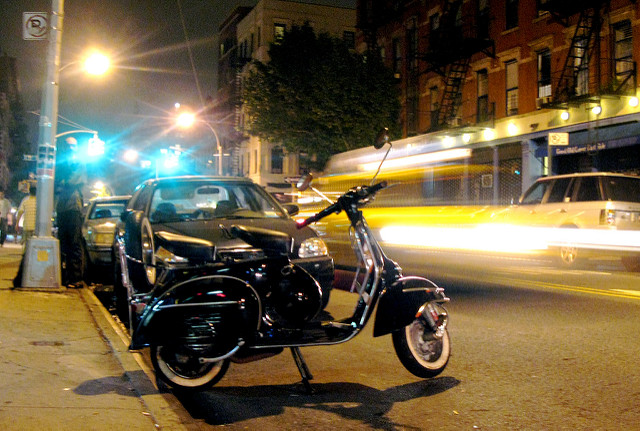 We asked our contributors, friends and notable Brooklynites to share their favorite New Year’s in NYC. Here, Jonathan Schnapp, co-owner of the Royal Palms Shuffleboard Club, shares his epic night in his signature, e e cummings style of email. His shuffleboard palace is throwing their third annual New Year’s Eve Flamingo Formal on Saturday, a totally free, fun night and a great excuse to dress up for the last hurrah of the year. For more ideas, check out our last Ideal Week: New Year’s Eve in Brooklyn edition.

If you have the will and the wheels, you can make a progressive party out of New Year’s. Photo: Torbakhopper via Flickr

it might have been the winter of 1998…
earlier that year i had taken a trip to SF and ridden a scooter for the first time
it was magical and i vowed to do whatever was necessary to procure my first vespa that fall.
sure enough, when september rolled around i dragged my butt
out to up and coming williamsburg
threw down $1500 bucks for a 1976 blue sprint 150
and called her ‘putt putt’.

by NYE i’d gotten the feel of the hand shift, the tides of traffic,
and the way cabs reacted impulsively when searching for a fare.
i felt the rhythm of the lights and the pockets of space between cars-
i was all shaolin soccer with my shit… i was one with putt putt.
that NYE i decided to attend
EVERY SINGLE PARTY I WAS INVITED TO.

it turned into a tour of the greatest city in the world
on the craziest night of the year.
my itinerary:
LES, Chelsea, Hells Kitchen, Upper East Side, Tribecca, Brooklyn Heights, Greenpoint, Union Square
i started at 5pm and got home by around 4am.

did it all in a black suit, skinny tie, and chucks…
no jacket
(big mistake)