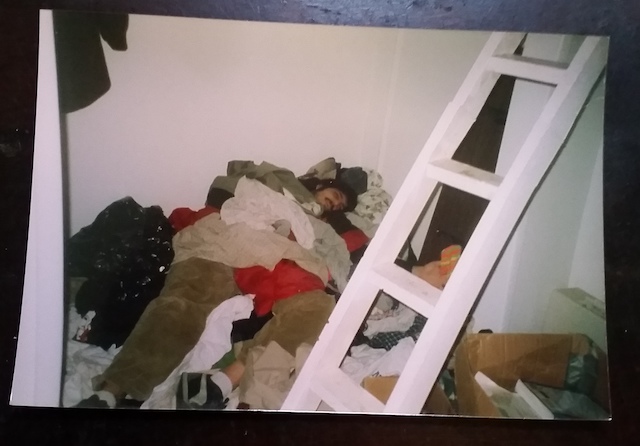 If you need a recommendation for an epic New Year’s Eve bash, Oriana Leckert is the person to ask. The author of Brooklyn Spaces: 50 Hubs of Culture and Creativity and events editor for Brokelyn knows all the borough’s DIY venues and the parties they spawn. She used to write our New Year’s Eve party roundup for years, and she tracks quirky events and alternative nightlife for her own blog year round. So when I asked her to name her favorite New Year’s Eve out of all the parties she must have experienced over the years, I anticipated that it would be a hard decision.

“I’ve been in this city now for 15 years, so I’ve had a lot of New York New Year’s. I’ve done the gamut, I have done a ‘crazy’ rave at the Electric Factory when that was still a place, a Bushwig drag extravaganza at Secret Project Robot, and a Cheryl party at the Brooklyn Masonic Temple. Then, recently, I’ve been trying to do more of the quirky, iconic Brooklyn things. I did the fireworks at Coney Island a couple of years ago, and the steam whistles at Pratt, and those both stand out as kind of silly but also really memorable.” 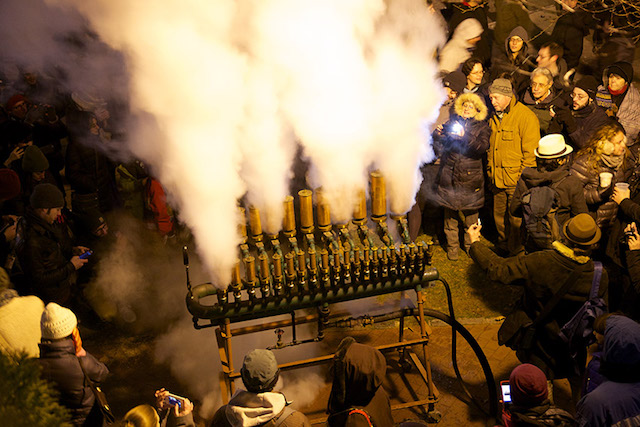 For anyone not familiar with Pratt’s tradition, the annual event brought antique steam whistles from trains, factories, and ships, including a 1930s ocean liner, back to life. The art school led the resonating show for the public for 50 years, before its chief engineer performed the final one in 2014. “It’s really surreal, it feels like being in a movie, because between the darkness and the steam, you can’t really see very far in front of you, so you’re sort of stumbling a little bit manically to keep track of where your friends are, and figure out where the next steam whistle will come from. It was really fun. It was really, really fun,” said Leckert.

But it still doesn’t make her cut as best New Year’s in NYC. “I think that out of all of them, the first one I thought of when you contacted me was my second or third year in the city. Because of an array of hijinks, we had moved on December 31st so New Years was our first night for my partner and myself in our new apartment.”

“This was probably 2003 or 4 I think, I moved to the city in ‘01. It was our second-ever New York apartment and we had gone from this teeny tiny place, just me and my fellow and our friend, three of us in essentially a studio to this really big, ridiculous apartment in the East Village where we had put some walls in some weird places and piled a bunch of people in.”

Inside Leckert’s East Village apartment from the early 2000s (note the photo is a real one, not digital). Photo: Oriana Leckert

“We were way too poor obviously for movers. We had corralled all of our friends into schlepping everything for us. We spent the whole day moving in the cold. We were exhausted…We didn’t have phone service yet, we didn’t have cable, or Internet, or anything and so we spent New Years on the floor in sleeping bags, watching a South Park DVD.”

So that’s it: a sleepover wins. If there was any doubt that paying $75 a head for an open bar, pyrotechnics and the promise of “more surprises” does not guarantee a good New Year’s, this seals it. Your enjoyment of the last night of the year simply hinges on the people you spend it with (and perhaps how comfortable you feel sleeping on the floor with them). That Amateur Night factor is real—perhaps even more so for Leckert.

“I’m a person who does like the party life and the crazy underground nonsense all the time, and so there’s much less of an impetus to do it on a holiday like New Year’s, or even Halloween. The people who produce these parties, they do an incredible job, and they make really wonderful immersive, crazy environments, but the price point is like 10 times higher, it’s so much more crowded, it’s filled with the kinds of people who don’t really have the same appreciation as I do for the level of artistry and culture that goes into throwing these parties…It’s hard to justify doing it.”

Maybe just as important a predictor of the fun you’ll have on New Year’s is how celebratory and hopeful you feel ushering in a new year. We may all look forward to ending one that brought us the worst mass shooting in recent history, the death of more icons than we were prepared for, and the most devastating election in our lifetimes. But from this last vantage point, 2017 looks even bleaker.

“I just don’t have it in me this year to do a big thing, to muster the energy for a huge celebration,” said Leckert. “I don’t know, perhaps my partner and I will lie on the floor and watch South Park again. That might be all I can handle. At least now we have Netflix and HBOGo, we don’t have to watch old episodes of a show that’s not even very funny anymore.”

New Year’s and chill may not be the worst way to ring in 2017: it was another great year for television.