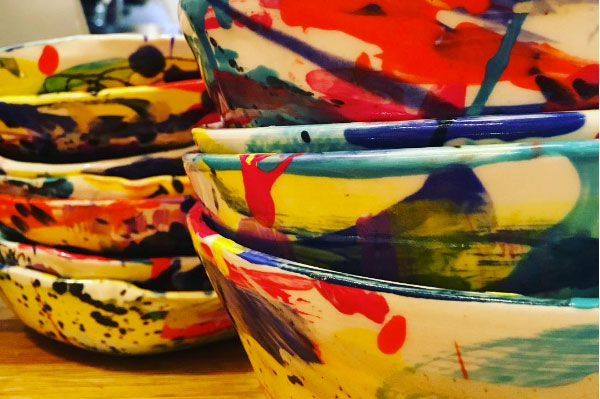 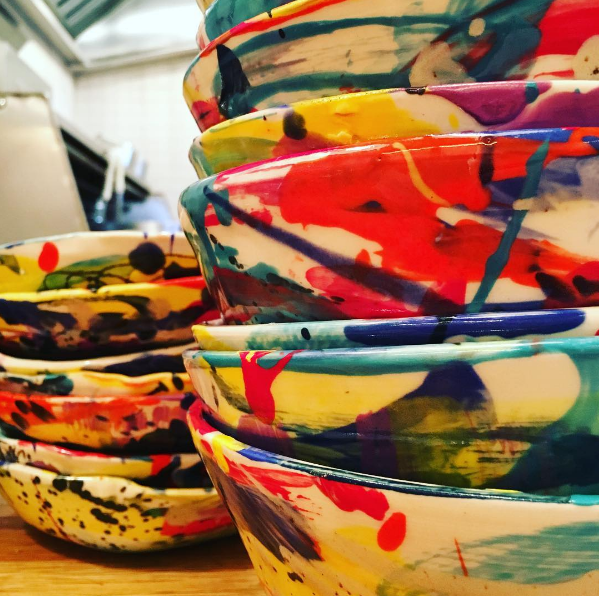 The noodles are perfect, the broth is delicious and the ramen bowls are handmade in Greenpoint. Photo: @Takumenlic via Instagram

A few weeks ago a friend who lives in Long Island City invited me to come over, mentioning that if we got hungry we could pop around the corner from her house to a Japanese izakaya where we could grab some snacks and sake. I’ll admit it, I was dubious. Long Island City has lots of choices for Asian food, but none that I’ve loved. There’s mediocre Thai in spades, just like the rest of New York City. Mu Ramen has delicious food, but the wait is always a problem and frankly, they’re just not that friendly. Hibino I do like, but I wouldn’t call it an izakaya.

What I was shocked to find, tucked behind the 108th Precinct, less than a block from the Vernon-Jackson stop on the 7 train was a perfect neighborhood restaurant, a place you can indeed pop into for some snacks a beer, but that also feels fancy enough for a special night out.

Takumen serves some of the best ramen I’ve had anywhere, plus traditional izakaya snacks like chicken wings, and somehow quintessentially Japanese takes on the food you want to eat, like a kale and black sesame salad with fried peanuts, parmesan, radicchio and yuzu black pepper dressing. They have an excellent beer list and you can, and will, spend all your lunch money on very good sake here. The gorgeous space is somehow light, bright, minimalist and cozy all at once, like a Japanese restaurant in Copenhagen lit from within with California sunshine. Tip is included in the menu prices, which are reasonable. In the morning, there’s a cafe window serving Parlor Coffee, Dough doughnuts and other local treats. The more I looked at the menu, with its house-cured meats, Morgenstern’s ice cream and “secret guacamole,” in addition to sushi, ramen and sashimi, the more I wanted to know about Takumen. 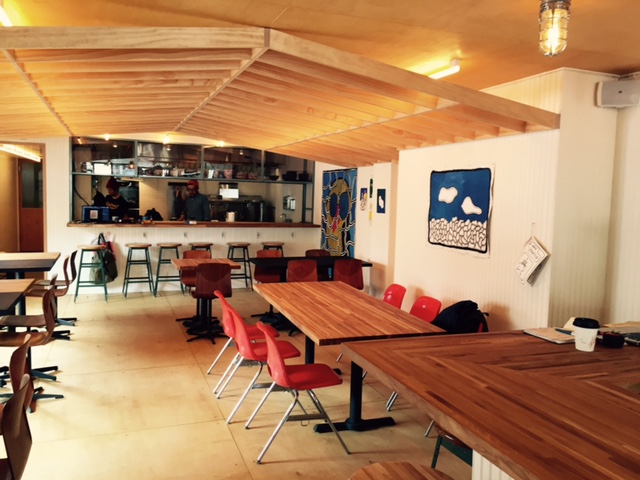 The interior feels like a Danish restaurant lit by California sunshine. Photo: Takumen

If you’ve eaten at New York City izakayas, like the famed Sake Bar Hagi, a basement lair of delicious fried octopus, cheap sake and strangely addictive ketchup-y spaghetti, then you know that they’re generally, inexpensive, casual restaurants where you go to drink and eat a slightly crazy variety of small plates. Shiho Suga, general manager at Takumen, explained that izakayas hold a special place in Japanese dining culture, because most other types of restaurants tend to specialize in a single category of dish, like sushi, ramen, soba or yakitori. She said that the creative chaos of an izakaya menu is freeing to Japanese and American diners alike.

“At an izakaya I expect them to have pretty much everything. You can enjoy pizza with sake, sashimi with wine and it’s okay to do that, there are no rules,” said Suga. “Whatever you feel like you’d like to eat, you can share with your friends. It’s like New York–a bunch of different cultures in one location. Food culture in the U.S. says that everyone has their own dish–I will have this for an entree and this for an appetizer. At an izakaya in Japan, I will pick five different dishes for everyone to have, there’s no, this is mine, that’s yours, everything about sharing, talking, enjoying the moment with food and drinks.”

Suga said that from the menu to the design to the ingredients, that izakaya ethos is the purpose of Takumen–to be a neighborhood place where diners come to eat, share and experience food. 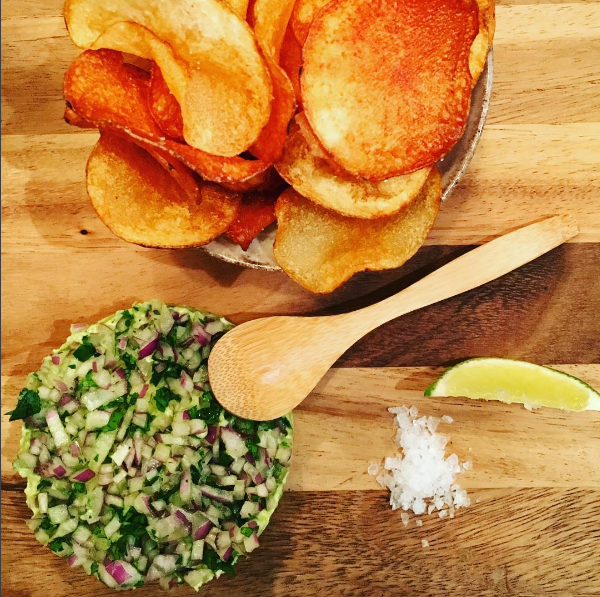 Takumen’s chef, Kiyo Shinoki, is something of an authority on creating what Suga called, “Non-traditional Japanese food that is somehow Japanese to us.” As the chef at Bohemian, the only-in-New York, referral-only restaurant behind a butcher shop in NoHo, and the mastermind of the menu at Bar Goto, he’s known for playing with Japanese flavors and local ingredients.

The small plates at Takumen, like the wings and the Cajun tako-octopus are delicious enough to order a second round once you scarf down the first. I loved the creamy, subtly spicy potato salad, though my dining companions were less impressed. That “secret guacamole” comes with house-made potato chips, and Suga told me that a Mexican line cook shared his recipe with Shinoki years ago, and that’s why they’re not telling what makes it so good. You don’t generally expect a place that serves lots of different dishes to excel at ramen–from noodle texture to broth it’s an obsessive game, but truly, Takumen is dishing up some of the best bowls in the city. The one thing I wasn’t impressed by was the sushi. My yakiniku BBQ roll didn’t do justice to the short ribs or the roll. 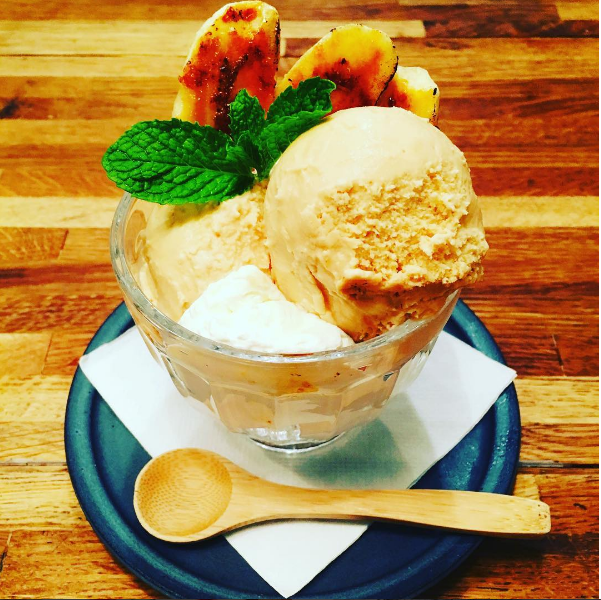 And, a sundae made with Morgenstern’s ice cream for dessert. Photo: @takumenlic via instagram

Part of what makes Takumen such an excellent neighborhood restaurant on so many different levels is the deep interest everyone involved takes in local collaborations. Sachiko Shinoki, Kiyo’s wife, designed the space, inspired by a West Coast road trip, said Suga. The dishware, including colorful ramen bowls handcrafted by Brooke Winfrey of btw ceramics in Greenpoint (she’s since moved to L.A.) and other pieces from New York ceramics artists, was designed specifically for Takumen. Every few months a new collection of artwork from a local artists goes up on the walls. Alongside the Parlor Coffee, Takumen serves Matchabar matcha. And while Morgenstern’s, the inventive ice cream parlor on the Lower East Side, doesn’t do wholesale as a rule, Shinoki worked with them at Bohemian, and convinced the purveyor to create a restaurant account for Takumen.

“We like working with people who have very strong feelings toward what they do” said Suga. “They’re passionate about what they do, and that’s how Kiyo approaches food.”

There’s a purposeful cohesion to the space, both physical and experiential, that they’ve created. “We wanted to create a space for local people with international food and a real experience,” said Suga. “We think about ingredients, which dishes go on which plates, it all comes together with good food, good plates, good service, something everyone can appreciate.”