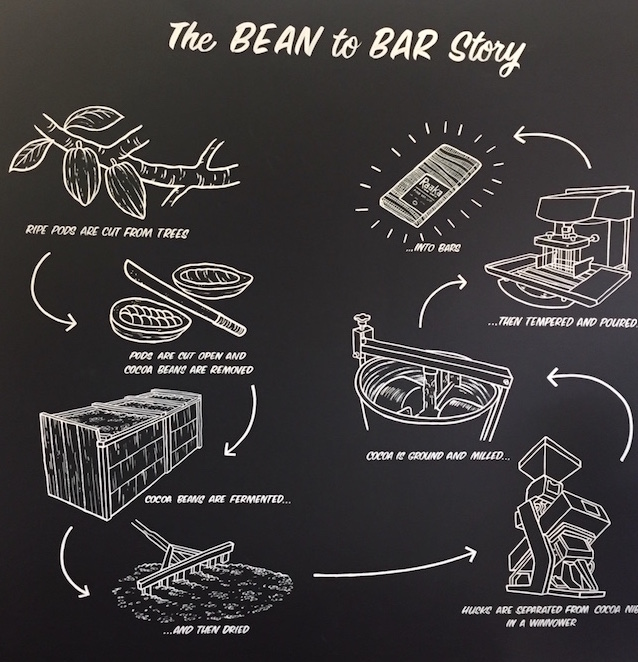 Inside Brooklyn’s 4 Chocolate Factories, you can learn how cacao turns into candy, and everything you need to know become a certified chocolate snob. Photo: Meredith Craig de Pietro

You can buy chocolate from dozens of chocolatiers in New York, but only in Brooklyn can you visit four different chocolate factories to see the magic in action. I spent the better part of the fall touring Brooklyn’s flourishing chocolate scene and discovered flavors and delights beyond anything Hershey’s could imagine. There were no Oompa Loompas churning out the candy, sadly, but I did discover what dreams are made of (tons of handcrafted dark chocolate). Here’s what to expect before you embark on your own Willy Wonka-inspired escapade. 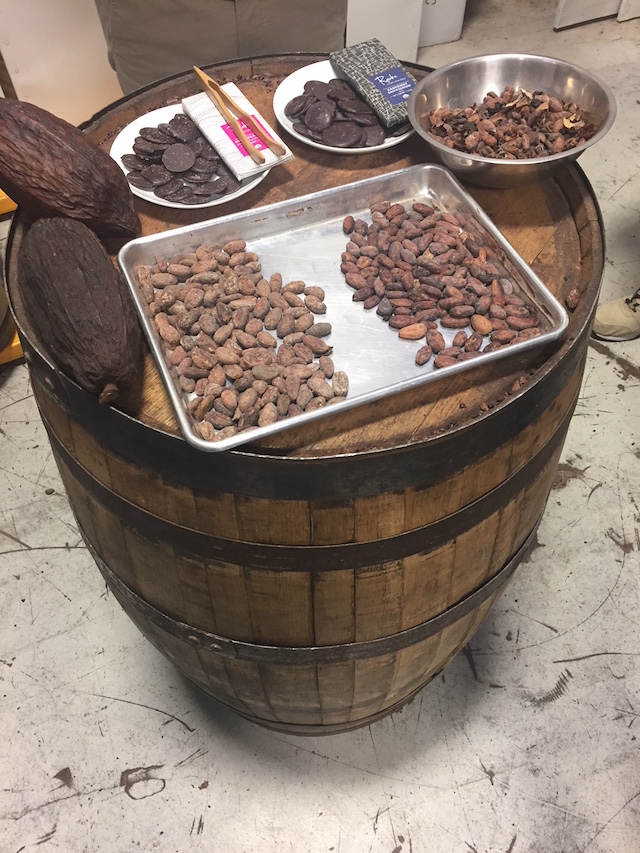 Each cacao bean has a slightly different taste, depending on where it comes from. By the time you leave Raaka, you’ll be able to tell the difference. Photo: Meredith Craig de Pietro

If you somehow miss Raaka’s mammoth green brick building on an industrial side street in Red Hook, you’d be able to trail it by the scent of chocolate beckoning you inside. Raaka (which means “raw” in Finnish) is the ultimate Brooklyn foodie destination, where, after donning a hairnet and thoroughly washing your hands, you will discover the secrets of cacao, contemplate the wonder of flavor pairings, and see first-hand the DIY mentality of true Brooklyn artisans. The tours here are frequented by chefs, food writers and chocolate connoisseurs. After looking at the giant cacao pods, they begin with the cacao beans, tiny capsules sourced from all over the world, including the fruity specimens from Peru and the smoky gems from Bolivia. After the guide teaches you how to crack the shell like a peanut, participants are encouraged to call out the notes they taste and think about what flavor would pair well with what they taste. Most chocolate needs a heavy roasting process which also destroys these unique flavors, but these beans are lovingly fermented so notes are still apparent in the finished products. The flavoring here is often done in the bean stage, through aging with bourbon or wine or  infusing the nibs with a homemade ginger tea. It seems that the Raaka team really enjoys the process of discovering new flavors to enhance its single origin chocolate; Cabernet Sauvignon, Ghost Pepper and Bourbon Casked Aged are some of their signature bars. 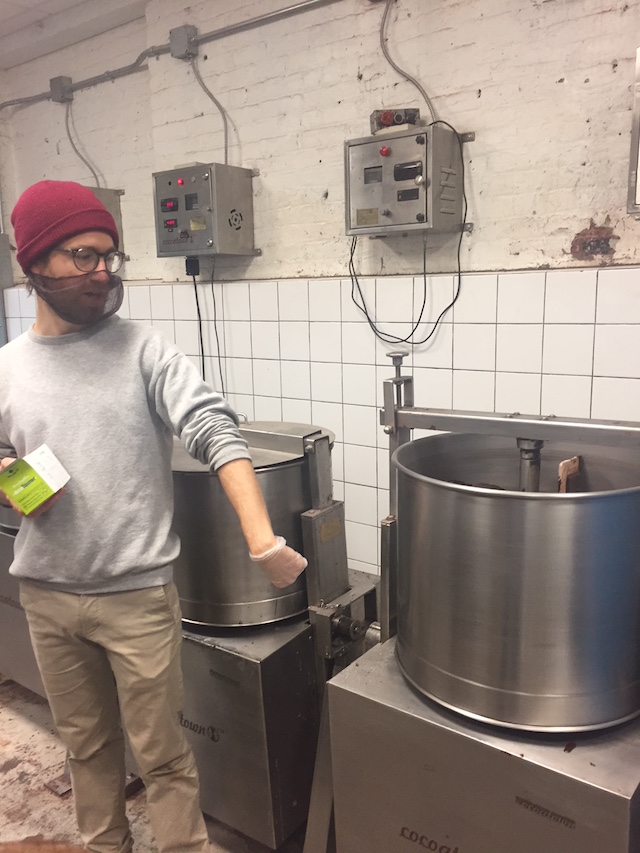 At Raaka, hairnets are a must to tour the factory. Beard nets are optional. Photo: Meredith Craig de Pietro

Moving around the space, the machines in the factory buzz and hum and are mostly repurposed or just built here by the team. The winnower is made from combining a juicer and a vacuum, and separates the nib from the husks, which are then donated to local farms like the Edible Schoolyard or Brooklyn Grange to use as fertilizer. Tourists examine the winnowing, grinding, tempering, freezing processes (tasting all along the way), and cheering at the wrapping machine when the bar is now ready for shipment to Whole Foods, Stinky Cheese, Murray’s, Dean & Deluca and other stores around the country. If, by that point, you aren’t stuffed to the core, there is a chance to try all of their flavors from Bananas Foster (made with rum infused nibs) to Yacon Root (sweetened only with the root, no sugar). For the ultimate chocolate food lover, there is the Raaka subscription box, which ships new and experimental flavors every month to your doorstep.

FOOD SNOB APPEAL: Puts the “art” in artisanal
CHOCOLATE SAMPLES: Yes, but also hot chocolate and coffee
KIDS OR NO KIDS: Perfect for kids and kids at heart
INNOVATIONS: A low heat raw chocolate
TOURS: Public tours will be available in the Spring. Private tours can be arranged for $10/ per person. 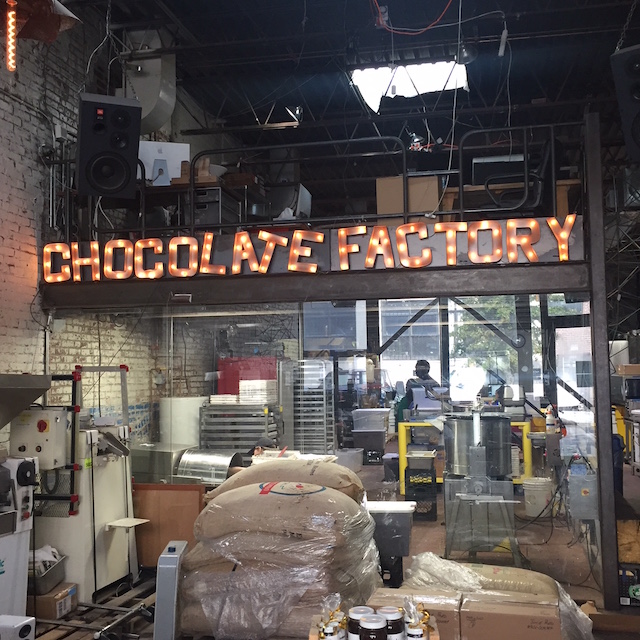 Daniel Sklaar, the founder of Fine + Raw, came to New York from South Africa to work in finance, but because of his pure love for chocolate, he started a factory instead. This joy in finding something he loved to do is apparent throughout the company. In the early days of the company, Sklaar would deliver all the chocolates by bicycle, until with so many orders it became unmanageable. The staff grew a little at his company, but then, so did the enthusiasm in this bean-to-bar shop. Nestled a mere block from Roberta’s in Bushwick, this cafe-slash-factory is full of good cheer that one would expect from a chocolate factory. You’ll be offered a hot chocolate or latte when you arrive, and be brought back through the space. The tour guide marvels at the mysterious machines winnowing and tempering, and everyone is smiling from ear to ear. The beans come from sustainable farms at above fair trade prices from collectives in Haiti, Nicaragua and Dominican Republic. They don’t process their chocolate over 150 degrees, which is why they consider their food a raw product. They believe that this results in vital flavors, and keeps in the minerals and vitamins. Fine + Raw believe that chocolate is a super food, and that without the refined sugar of say, a Hershey bar, chocolate is actually very good for you. 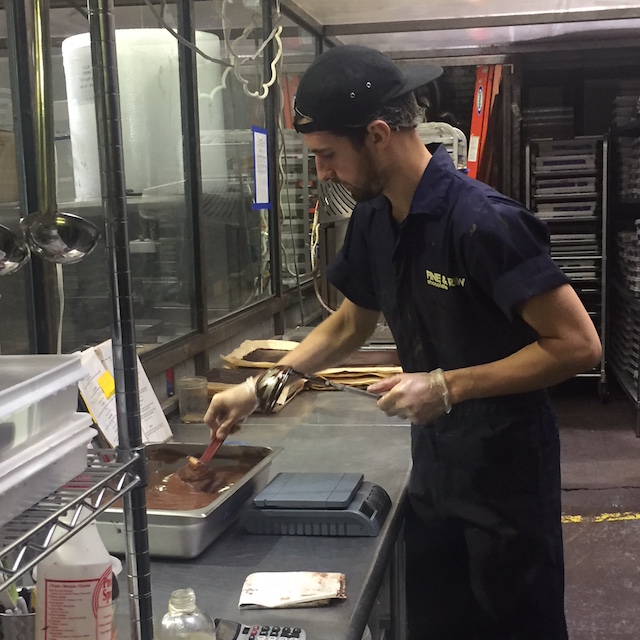 The smell of melted chocolate wafts through the air in this small factory. Photo: Meredith Craig de Pietro

Now is the time to taste some chocolate. Flavors like Mesquite, Lucuna & Vanilla, or Sea Salt intrigue the tastebuds. Fine + Raw even goes beyond the bar, with mix and match truffles that make the perfect gift for friends or your own mouth. Taste that? This is craft chocolate done impeccably well. Finally, you’ll get to meet a group of women who are individually wrapping the instantly recognizable pinup-cowgirl packaging by hand. Another employee sits at a computer working out the shipments. Just like that, you’ve met everyone at the company and unless you want to start working here, it’s time to leave. But cheer up, knowing that you can buy their bars.

FOOD SNOB APPEAL: They were one of the first chocolatiers in Brooklyn
CHOCOLATE SAMPLES: You’ll get your fill
KIDS OR NO KIDS: Extremely kid-friendly. They even have a singalong on Saturday mornings.
INNOVATIONS: With a new 65,000 square foot space in the Brooklyn Navy Yard, there’s lots on the horizon
TOURS: Monday-Friday, 4pm; Saturday-Sunday, 12pm and 3pm. Price: $10, complimentary for children under 10. 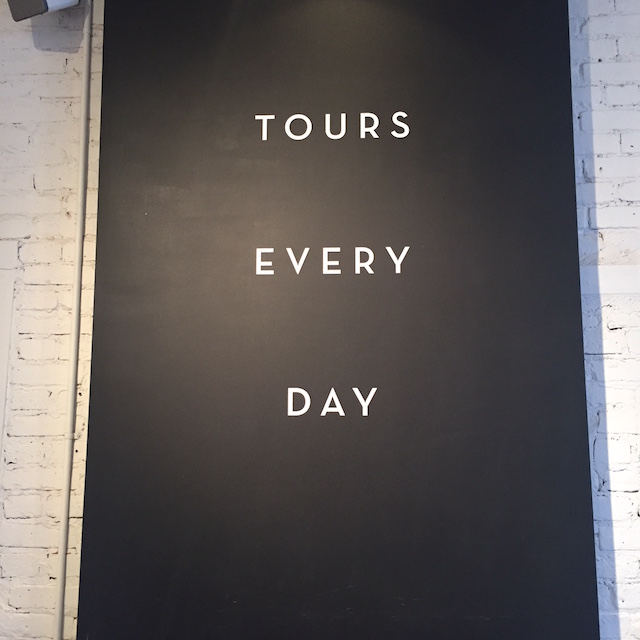 Mast Brothers has the largest artisanal chocolate production in Brooklyn, and they have tours every day. Photo: Meredith Craig de Pietro

Michael and Rick Mast are some of the more famous and recognizable artisans of the Brooklyn food scene. With their long beards and starched white aprons, they have exemplified the hipster “maker” scene of Williamsburg with a published cookbook, brightly colored beautiful packaging, and prominent placement in the city’s hippest food establishment. Founded in 2007 in the brothers’ apartment, and written about by BB first in 2008, the brand has since expanded to three retail stores and an enormous chocolate factory in the Brooklyn Navy Yard to deal with their massive amount of wholesale orders, including 200 Whole Foods around the country. They are the most popular craft brand in an increasingly crowded marketplace, and although they have been plagued with rumors that they originally started by remelting other chocolate, thousands of chocolate lovers continue to visit their touring factory in Williamsburg each month to peek behind the curtain. 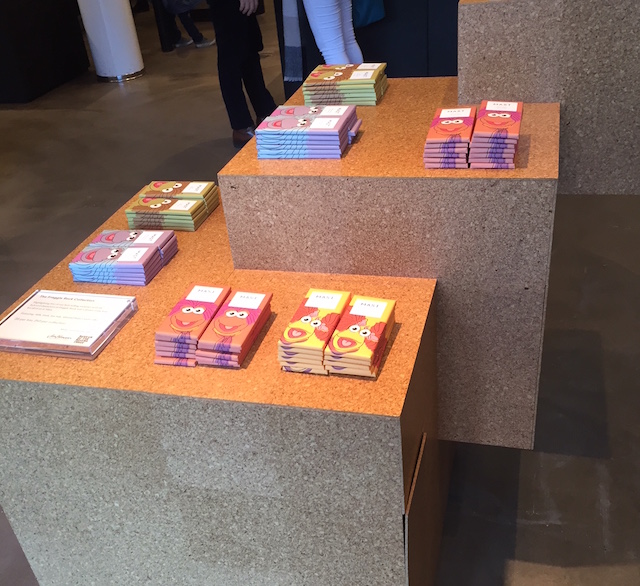 Mast Brothers doesn’t allow photography on the tour, but here’s what you can expect from the shop. Photo: Meredith Craig de Pietro

The tour guide at the Williamsburg location will tell you of the legendary start where the brothers used a hairdryer to make their first batch, and how their obsession with the local food scene has resulted in unusual partnerships. For instance, they use Brooklyn Grange hot peppers for their Rooftop Chili Bar and Frankie’s Olive Oil for their Olive Oil bar. Plus, they partnered with The Jim Henson Foundation to offer The Fraggle Rock collection which gives a percentage to the Jim Henson foundation and are created as a tie in with the Museum of Moving Image’s Jim Henson exhibit. You’ll learn that the brothers “treat chocolate like a savory food,” where they create unique combinations like the Rye Bar as a homage to rye bread makers in Brooklyn or the Popcorn flavor inspired by the city of Los Angeles. You’ll watch a Willy-B hipster folding tiny gold foils meticulously over twee squares of chocolate and you’ll taste your share of delightful chocolate flavors. Like any great brand, there is a strong story behind the label, and it’s impossible not to fall under the spell. “You just missed the brothers; they left just before you came! the tour guide might say. Although you may be here in hopes of seeing the wizards, the chocolate speaks for itself.

FOOD SNOB APPEAL: Let’s be honest, it’s all about the whiskey flight
CHOCOLATE SAMPLES: Skimpy, but who cares? A whiskey flight is included
KIDS OR NO KIDS: Allowed, but they can’t sip the whiskey
INNOVATIONS: All new shiny machines; live chickens in the backyard
TOURS: Saturdays/ Sundays, Summer: 12pm, 2pm, 4pm and 6pm. Winter: 2pm and 4pm only. Price: $20 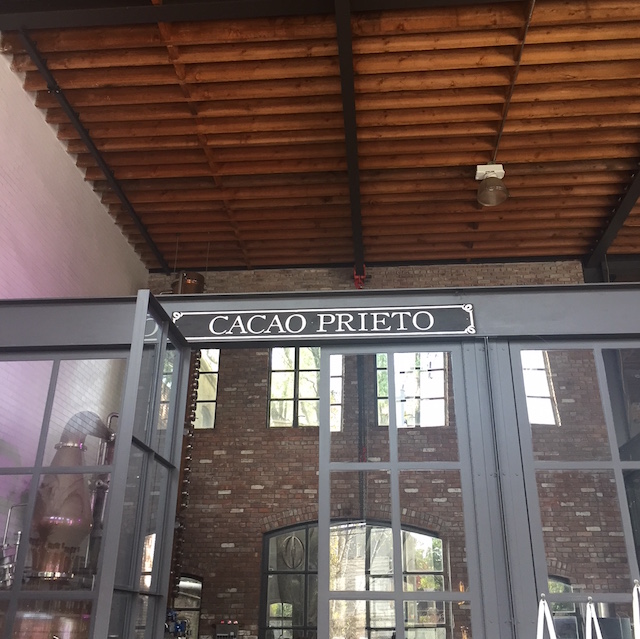 This beautiful industrial building makes chocolate and spirits. It also has a yard full of chicken out back. Photo: Meredith Craig de Pietro

Cacao Prieto is a chocolate maker, but it’s also a whiskey distillery. The beautiful old building that houses the factory looks turn of the century but is actually only 13 years old. Although it is off of Red Hook’s main drag, it seems the ferry stops close enough to let off gobs of tourists who pack the daily tours for Widow Jane whiskey flights. The entire place looks ready for a Pinterest photo shoot. The machines are shiny and glistening, and the floors are impeccably clean. (The founder is also an aerospace engineer and created the space age winnower.) Your tour guide will lead you through the factory/distillery, explaining that the chocolate is single origin and comes mostly from the Dominican Republic, to create a uniform 72% dark chocolate. Downstairs in the gorgeous kitchen, handcrafted bark bars are made in plastic molds and sprinkled with fruits and nuts. Their bigger “criollo” bars are made for mass production with the same 72% chocolate base, and then flavored with obscure tastes like Absinthe and Orchid. It has a lab vibe with conveyor belts and sparkling countertops. You’ll taste a bit of chocolate, whetting your palette for the drinks soon to come. If you want more, you can buy the bars at Union Market, Fairway or Whole Foods. The wrapping machine is the apex of efficiency, packaging 60 bars per minute, although the human touch is apparent in the hand sealing and labeling. Back upstairs, the guide will lead you past the large window overlooking the back yard, complete with wooden furniture and live chickens, reminiscent of an upstate farm. Although it’s a weird juxtaposition of chocolate, chickens and drinking, it’s actually perfect for Instagram. 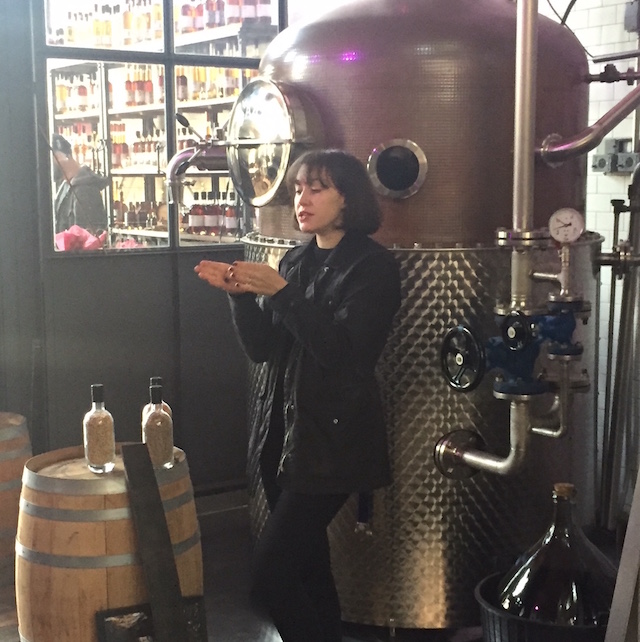 Beautiful shiny machines take center stage on this tour, mesmerizing you until you get to the whiskey tasting flight. Photo: Meredith Craig de Pietro

Your tour guide switches here, as the whiskey expert takes over. The giant distillery machines stand behind her, even newer and shinier than anything you’ve seen before. They make rum, white rum, corn whiskey, and rye from grain-to-barrel. They use brand spanking new barrels for the aging process. The water used in their process is also fresh, coming from a mine in upstate NY. After an endless lecture about the making whiskey and rum, they will lead you to the bar where the six-taste flight is waiting to reward you. After the first sip, you’ll most likely forget about chocolate, but by the end you might buy a batch to take home with you to keep the party going.