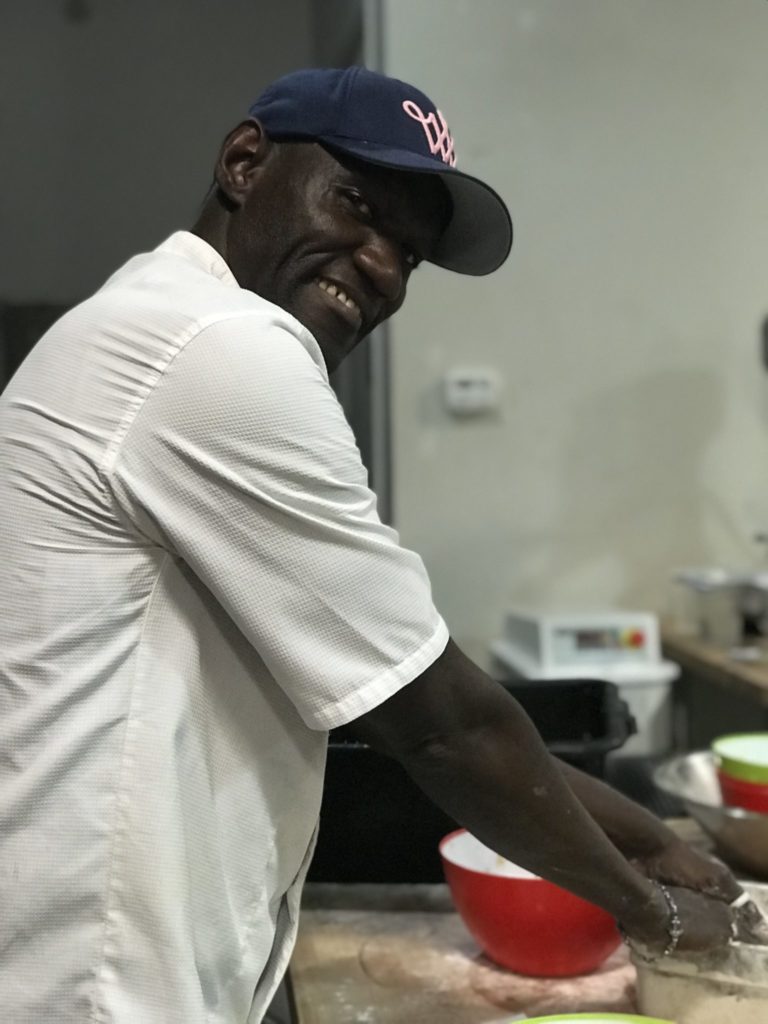 Brooklyn Bread Lab’s head baker, Assane Diop, teaches a breadmaking class that is as philosophical as it is practical. Photo: Nicole Davis

It was foolish to think I was going to learn to bake a real artisan loaf in two hours. But the class I’d signed up for at Brooklyn Bread Lab promised to relay the all the tricks of mixing and baking a rustic bread by hand in one evening.

Excellent, I thought. I can do this. Because it’s really just time that prevents the average cook from attempting this staple at home. (That, and the fear that your bread will bomb after you’ve spent precious weekend hours on it.) For years I shied away from making a simple pizza dough for the very reason that you have to wait around for yeast to work its magic, and transform flour and water into something pliable enough to develop a perfect crust in the oven.

Once I did, I discovered pizza is just a one-bowl, one-rise affair. I was ready to attempt the kind of crusty loaf you can tear by hand. I just hated that I had to plan for it so far in advance. Even no-knead bread needs over 12 hours to rest and rise before baking.

The class is one of a few taught at Brooklyn Bread Lab, a well-lit, high-ceilinged space on an industrial street in Bushwick. It’s owned by The Williamsburg Hotel, and it supplies guests at the hotel and its restaurant, Harvey, with their croissants, palmiers and boules of artisan bread. Why the hotel has invested so heavily in its own bread and pastry making operation seems curious to me—one could simply procure these goods from another bakery rather than run two operations at once. But the owners are very much committed to in-house baking. So much so that they even mill their own flour from whole grains, which cannot be easy or cheap. All of this is in keeping with The Harvey’s mission, according to a spokesperson, to serve nutritious food, and to prove to those who avoid gluten by choice and not necessity, that bread made from house-milled flour is much healthier and easier on your body. 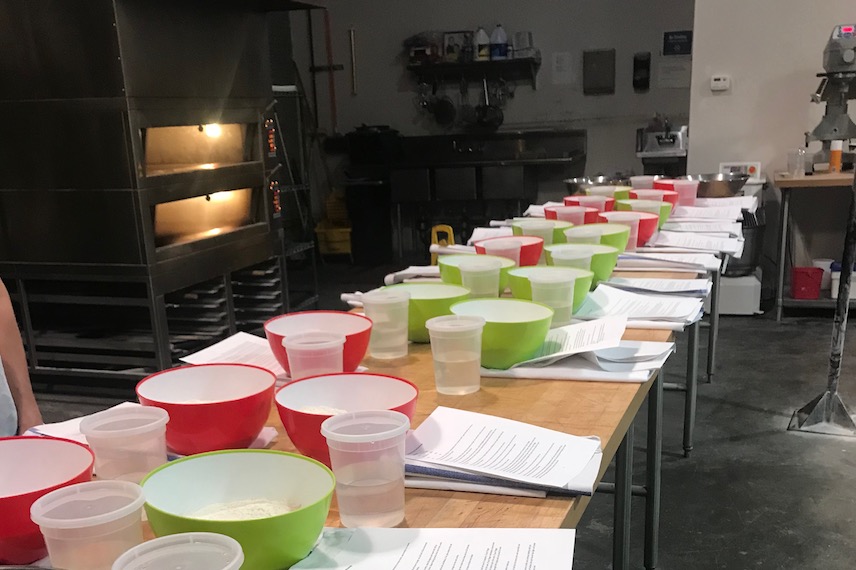 It’s their towering milling system that stands out when you enter Brooklyn Bread Lab, which will open for retail sales in March. As “students” arrived, grabbed a glass a wine and noshed on the Bread Lab’s mini chocolate croissants and hunks of sourdough, a few of us contemplated the machines that dominated the room. I quickly befriended a man who was already an avid home bread maker. He relayed an impressive war story about the time he tried to bake a baguette and placed a Pyrex dish of water in his Smeg oven to create the steam it needed. The high heat shattered the dish and the door of the oven, which had to be at minimum a $4,000 mistake, as the oven needed replacing. And yet here he was, soldiering on after his baguette blowup. Trial and error—it doesn’t come cheap.

Class began, and head baker Assane Diop, who speaks in a thick French accent and came to the Lab by way of the boulangerie chain, Maison Kasyer, introduced us to the Lab’s pièce de résistance—its industrial flour mill. He flipped it on and it rumbled to life. Like a home mill on a grander scale, it splits open the whole grains of wheat, then blasts its various parts—endosperm, wheat germ and bran—through a series of sieves that sift it down into a much healthier flour than the household, bleached white variety. (Part of the experimental nature of the Lab lies in getting this heartier flour to perform as well as its commercial counterparts in delicate pastries. Judging by the flaky croissants I sampled, they seem to have nailed it.)

After this lesson in milling, we took our places at a long stainless steel table, where Tupperwares of premeasured flour and water were laid out beside a bowl for each student. I stood next to baguette man, and we craned our necks as Diop talked us through, quite softly, the various steps of baking along with his assistant Kevin Bruce. We moved out of chronological order, from making our own dough, to scoring their already proofed dough and sliding it in the oven, back to adding sourdough starter, a house-made live yeast, to our nascent dough, then thumping their freshly baked loaves for that hollow sound that indicates the bread is done. 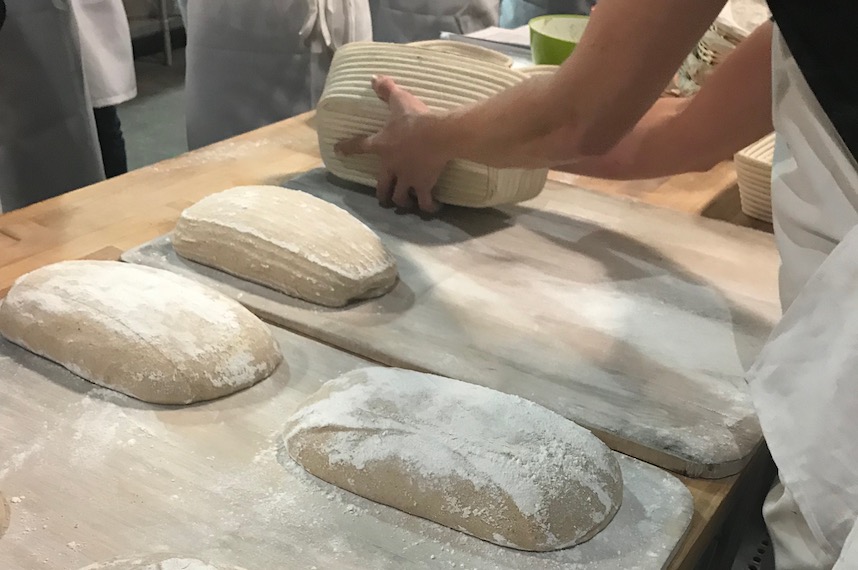 I was happy I didn’t have wine beforehand, as the class inched closer to three hours and I was losing steam. More than once, a few people, exasperated by Diop’s quiet instruction, asked him to speak louder. But I was close enough to hear much of his baking wisdom. At its essence,  bread baking is like life. The results vary day after day. The moisture in the air, the temperature inside or out can alter the loaves in infinite ways, so that you never achieve the same exact product consistently. Despite the science at work—the exact measurements and the living yeast altering the dough’s chemistry—bread also involves a lot of luck and lived experience to understand when the dough is behaving as it should. If it doesn’t come together, or you shatter your oven, you have to dust yourself off and get back at it again. As Diop explained sagely, “You make a mistake and you have to start over the next day. You can’t stay in bed.”

Especially since it takes years to develop this art. Diop has been baking for over 20 years, and I was just a few hours in. Even baguette man, who had already done this many times at home, felt he’d improved his game simply by seeing Diop shape the dough, a technique he’d never witnessed first-hand.

After the class, I was ready to devote my Friday night and Saturday morning to kneading, resting, rising and baking. The Lab provides the recipe, enough of their artisanal flour and starter for you to make their bread at home. One tiny wrinkle is that throughout the class Diop often spoke of his own shortcuts, so I followed a mix of the written recipe and my recollection of his process. My starter had also turned runny, a sign I’d messed up something. Still I forged on to figure out what worked on my own. 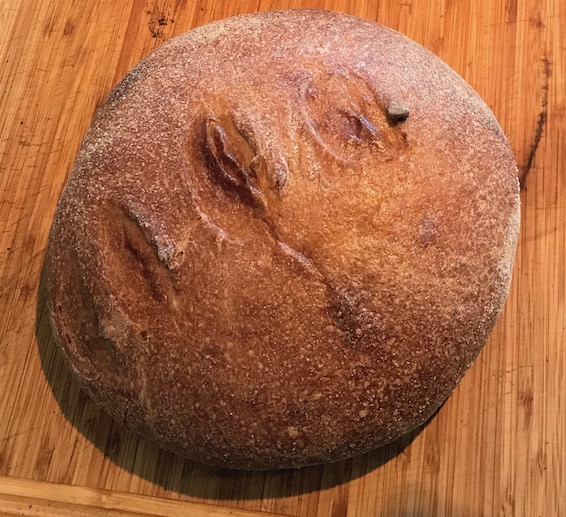 This may look edible, but it’s heavy as stone and undercooked inside. Photo: Nicole Davis

Fortunately, Brooklyn Bread Lab also sends you home with a fresh-baked loaf after class, which was much more delicious and actually edible compared to mine, whose ends were delightful with some butter melted on top of them, but a bit like a wet sponge inside. At least I know what to do differently the next time.

Brooklyn Bread Lab’s next Bread Baking for Beginners classes, which cost $95, is February 27, followed by a pasta making class in March. To learn when the next dates are available, follow them on Instagram and email them at hello@brooklynbreadlab.com.