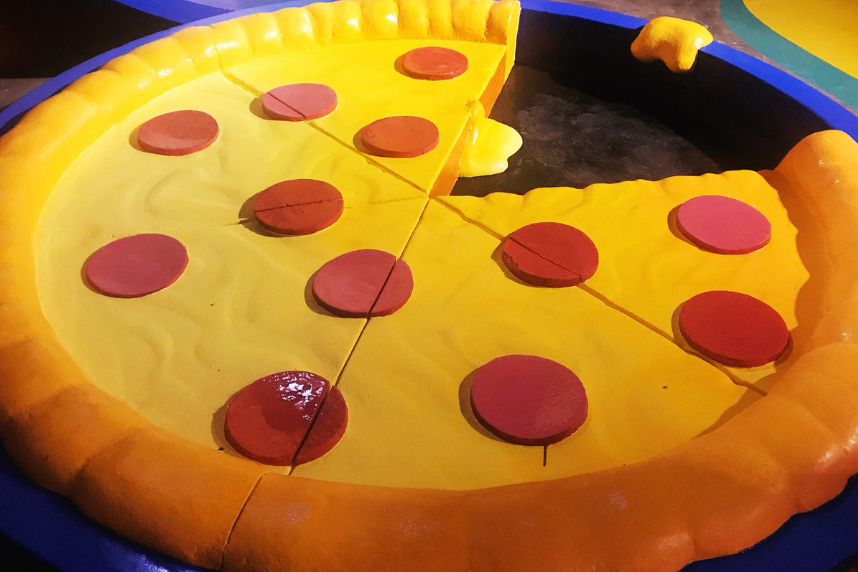 Where am I? Here are some hints: There are two people dressed up as pizzas, even though it’s not Halloween. There is a man passing around a platter of Totino’s Pizza Rolls. A crowd trips over each other on a pizza beach. Figure it out? Of course, you did, because of the geotags on the millions of photos I’ve just posted on Instagram. I’m at the press opening of The Museum of Pizza in Williamsburg, and you (sitting on the couch at home!) are sharing this experience me.

New York is being inundated with immersive Instagram experiences, ranging from Coach’s “Life Coach” to the Egg House. People pay about a $35-40 entrance fee, and then (usually) stand in incredibly long lines as they walk through a handful of decorated rooms. Earlier this month, NY Times writer, Amanda Hess wrote a takedown of these pop-ups after spending a summer attending many of the immersions. She summed it up succinctly as “a masochistic march through voids of meaning.” This is true, and yet, people still line up for each newly converted warehouse, waiting in extensive lines to take photos. So many are called “museums,” but there is no real art on display. And they are “shared experiences” only if you post to Instagram. Why then, do people love them? 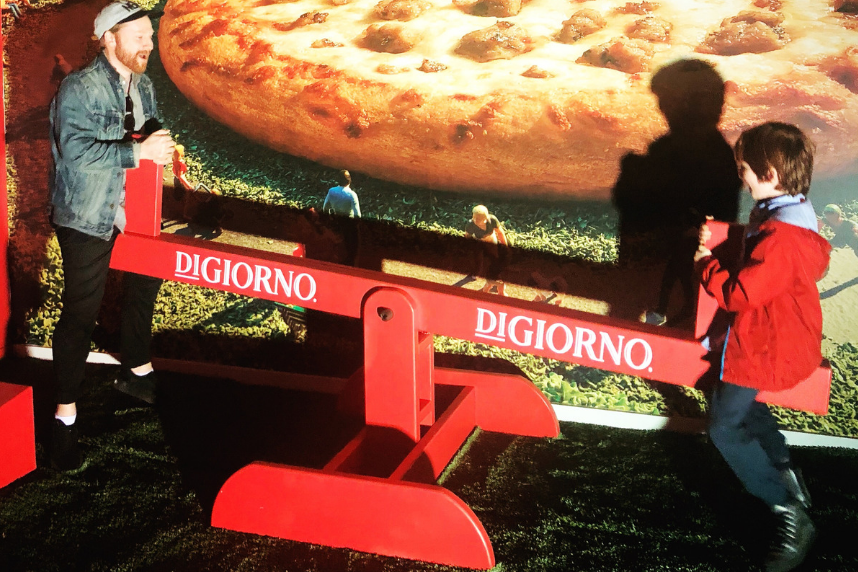 The “DIGiorno” see-saw at the Museum of Pizza is a heavily sponsored playspace. Photo: Meredith Craig de Pietro

This month I went to Color Factory (where I was reimbursed for the tickets), Museum of Pizza (press preview) and The Nightmare Machine (special press tour) to see what the buzz was about. There were similar components between experiences: photo opportunities, snacks (macarons, pizza), interactive elements (line drawing, a video game), and a ball pit (Into the Blue or the ball pit from Hell). The most obvious connection was the overt sponsorships. For example, at the Color Factory, I danced on a “Maybelline” dance floor and at the Museum of Pizza, I  played on the “DiGiorno” see-saw and ate pizza in the “Hidden Valley Ranch” room.

With the onslaught of pop-ups to New York, you’d be forgiven for thinking these are an innovation, but interactive art is nothing new. Artists have been creating three-dimensional experiences—installation art—since the 1960s. As Allan Kaprow explained in a 1965 interview about his first installation, “I just simply filled the whole gallery up…When you opened the door you found yourself in the midst of an entire environment…”  The artist, Yayoi Kusama, makes bright and photogenic art that, at first glance, seems connected to the pop-up “museums” of today. Unlike these Instabaiting experiences though, hers deal with psychological trauma and are derived from personal hallucinations. It took a world addicted to smartphones and social media for people to figure out that there was a market for this kind of experience outside of a traditional museum or art gallery—no artist necessary. 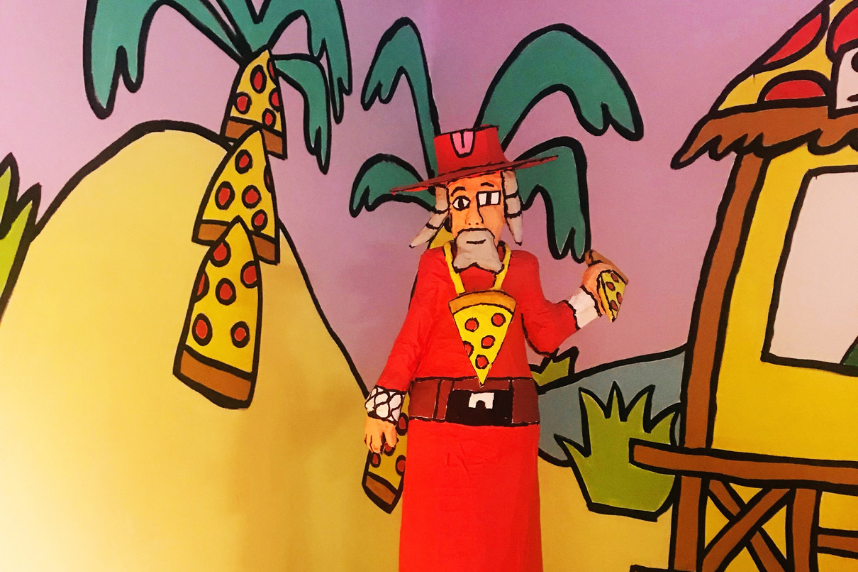 The Pizza Beach at Museum of Pizza would not be out of place in a downtown gallery. Photo: Meredith Craig de Pietro

One of the first companies to commodify these experiences was the Museum of Ice Cream, which New Yorkers licked up in 2016. In a New York Magazine profile of its founder, Maryellis Bunn, she said she “found the city’s existing institutions disappointing: They hadn’t adapted to larger cultural currents…leaving little that would ‘engage and capture’ her demographic.” Since then, dozens of pop up museums/ factories/ machines have signed temporary leases. Currently, you can get tickets for Rosé Mansion, Color Factory, The Nightmare Machine, Museum of Pizza, and Candytopia. Specifically for kids, you can find Mickey: The True Original or Trolls: The Experience. For pets, there is Human’s Best Friend, complete with a ball pit for your four-legged friend. 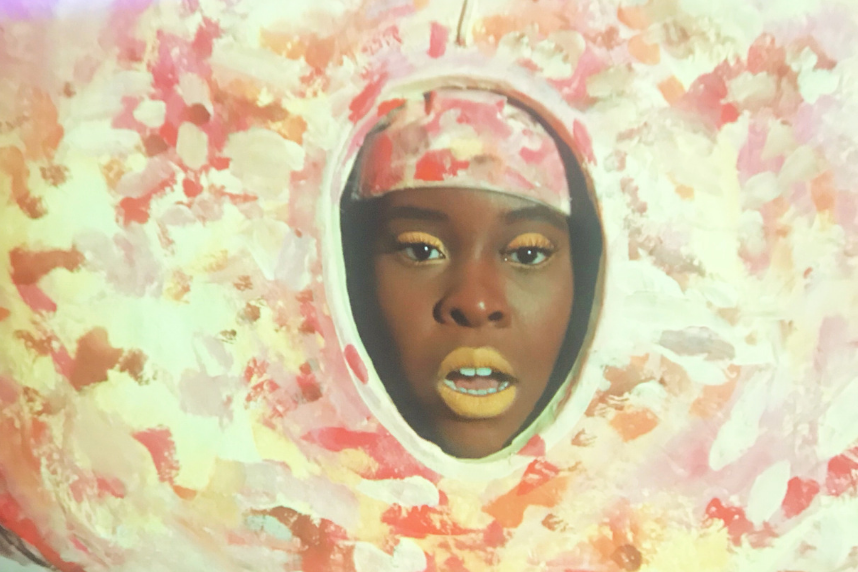 One example of a pizza video in the Museum of Pizza. Photo: Meredith Craig de Pietro

These immersions aren’t going to replace museums, but are trying to add to the landscape. Color Factory (by far the largest and most expensively done that I visited) partnered with many local artists and nonprofits, like the Land Gallery, Roz Chast and MMuseumm to give credibility to the experience. Yet without a cohesive curation, there was nothing gained by the artists’ involvement. Looking at art is secondary to the immersion. I took a quiz to find out my personal color (“Mystical Hedge”), I ate a combination of licorice and Swedish fish, and I made a line drawing of a friend. Museum of Pizza was the cheesiest of the bunch (no pun intended), with highlights including a pizza guitar by singer Andrew WK, traditional artwork by artists like Sarah Babah and an avante pizza beach by Moldy Peaches’ Adam Green. All of the art was lost in the venue where lines are formed to take photos, not to look at them. You can stand in a cheese cave or in a pizza vortex.

The Nightmare Machine made the most sense to me: witty, vibrant, and not waving a sponsorship flag or artist connection. People pay upwards of $38 at any suburban haunted house or cornfield maze, and although small, this felt like an independent experience, rather than a corporate takeover. I laughed a few times. By the end I was worn down. Maybe the experience of doing something fun and meaningless for a couple of hours is enough? 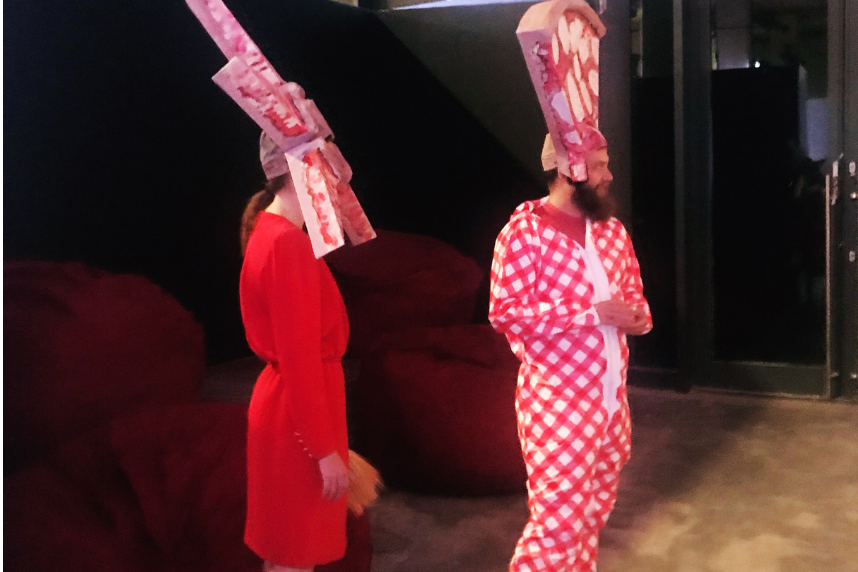 Influencers were on parade at the press preview of the Museum of Pizza. Photo: Meredith Craig de Pietro

I suspect this is just the beginning of the age of Immersive Experiences, and they will look different years from now. First, we should stop expecting them to be “museums,” even if their name suggests otherwise. It’s possible that with the corporate money that is being thrown around, these experiential immersions could grow into more serious conversations if that’s what we even want. In a world full of rage, incessant political strife, predators and agro patriarchy, a trip to a “museum of pizza” feels like a respite. Entering a brightly lit, vibrant environment where there is nothing to think about, nothing to learn, and nothing to do, is an escape from our current reality. Sure, the worn props look grimy in real life, and the sets don’t shine as bright as in the photos. There is nothing here to evoke strong emotions. Even the Nightmare Machine is as toothless as a gummy vampire. 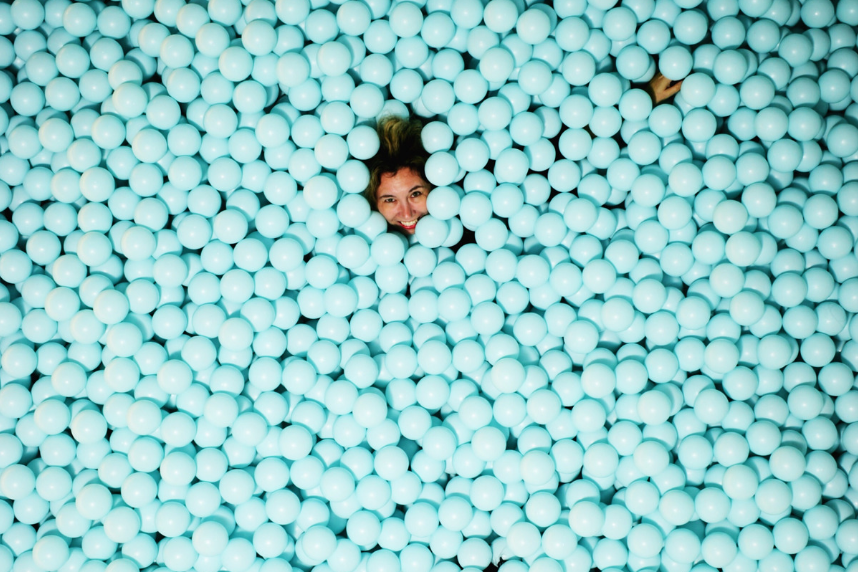 Here I am: In the midst of a political hellscape, swimming in a light blue children’s ball pit. My shoes are off. It’s so much harder to move around in a ball pit than I realized. I’m exhausted. I stop to take a break. I’m petrified of the germs that I’m sure are everywhere. Yet, in the photo, I’m laughing. Made for dilettantes in a world of chaos, the immersion gives a rare opportunity to pretend that everything in the world is fine, even just for a second, even if only on Instagram.