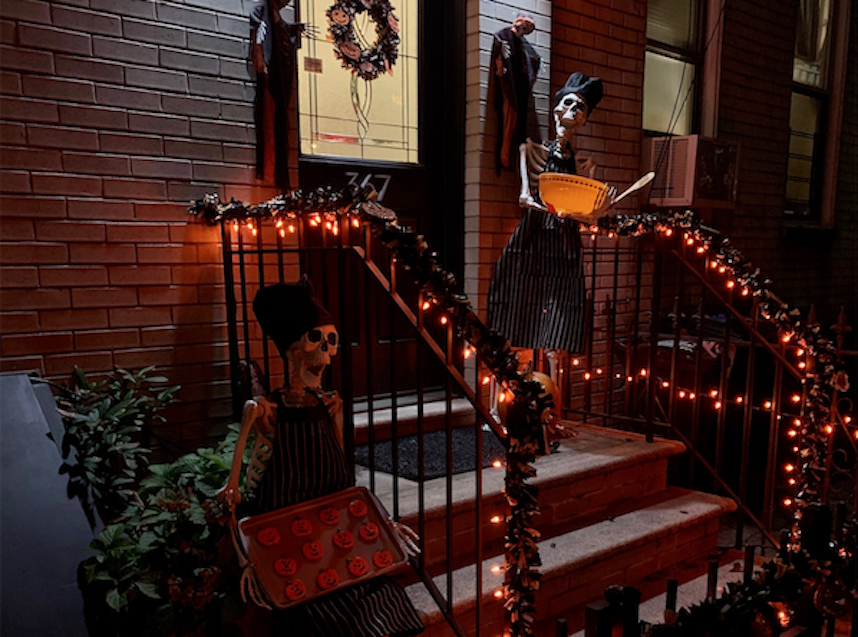 Early voting in New York starts TOMORROW! And since the scariest thing about Halloween this year is having to wait in terror at the thought that Trump might somehow win the election, vote as early as you can, and encourage everyone in your orbit to do the same. Photo: Kate Hooker

We’re a week and a half out the most important presidential election of our lifetime, and idk about you guys but I’m positively crawling out of my skin. Against all odds, I somehow mustered the strength to avoid watching the debate last night and went on a walk to peep some killer Halloween decorations in my neighborhood (see above) instead, but I’m not sure I’ll be able to resist the draw of Rudy Giuliani. . . err. . . exposing himself as a degenerate POS in the new Borat movie, which premieres tomorrow on Amazon Prime. There is a more sanity-preserving option, however, which is to spend an unseasonably warm Friday night at Boat for the Vote, a flotilla and concert featuring performances by drag opera singer Shequida Hall and a French horn quartet on the Gowanus Canal to remind everyone to get out and vote early starting on Saturday morning. My current plan is to cast my ballot and immediately stick my head in the sand until Nov. 4 (please god, for the love of all things holy, please let it be over then), and to that end I’m going to need a lot of anxiety-minimizing activities to keep me otherwise occupied, so here are some ideas for those of you who are similarly focused on simply making it to the damn finish line.

It may sound macabre, but immersing oneself in cold cases from decades past is a pretty effective redirect from present-day horrors, and as luck would have it Netflix has released a brand new season of its addictive Unsolved Mysteries reboot. You could also check out Sarah Cooper’s heavily anticipated comedy special, Everything’s Fine, which premieres on Netflix on Tuesday night and includes guest appearances by a very long list of notable names like Jon Hamm, Maya Rudolph, Ben Stiller, Winona Ryder, Fred Armisen, Whoopi Goldberg, and Helen Mirren. New York Magazine’s annual Vulture Festival starts on Monday, in a new pandemic-friendly “In the Nest” format, and you can pay $30 for a festival pass that includes access to a formidable slate of events like this one featuring Mary J. Blige, Method Man, and 50 Cent. Alternatively, head to Green-Wood Cemetery between now and next Sunday to see a special community altar that artist Scherezade Garcia has erected for Dia de Los Muertos, or to Brooklyn Botanic Garden for live music and dance performed al fresco as part of the last installment of its Fall Sundays series.

You can kill an hour quite enjoyably by listening to the one and only Patti Smith recount her adventures at The Chelsea Hotel with the likes of Allen Ginsburg and William S. Burroughs on a recent ep of Marc Maron’s WTF podcast, or by reading this hilarious ode to Dunkin Donuts and other weirdo New England obsessions by Brooklyn-based comedian Josh Gondelman. Got access to a car? Take a ride up to Connecticut to see Dave Attell, John Mulaney, or Mike Birbiglia, all of whom are doing live outdoor standup this week, or buy tickets to see a double feature like Psycho and The Birds or Get Out and The Babadook from now through Halloween at The Queens Drive-In. No wheels? No problem—you can watch one of these classic horror movies set in NYC from the safety of your own couch, or hop a ferry to Governors Island to pick up a free pumpkin at Pumpkin Point, a socially distanced pumpkin patch that runs from tomorrow through November 1. Maybe this is the week to bake something with pumpkin, or something with apples, or to finally get your flu shot like I did (surprise: It was oddly satisfying to check this sadly elusive accomplishment off my list!).

Guys, I don’t know, we’re all just hanging on by a thread at this point, right? Please just keep on keeping on, VOTE like your life depends on it (seriously, make a plan if you haven’t yet), and somehow scramble your way to the other side of this waking nightmare. It’s simply GOT to get better, that’s all there is to it, so stay tough and look alive through this final push and we’ll all get where we need to go together.

Leave a Reply to Katie N.