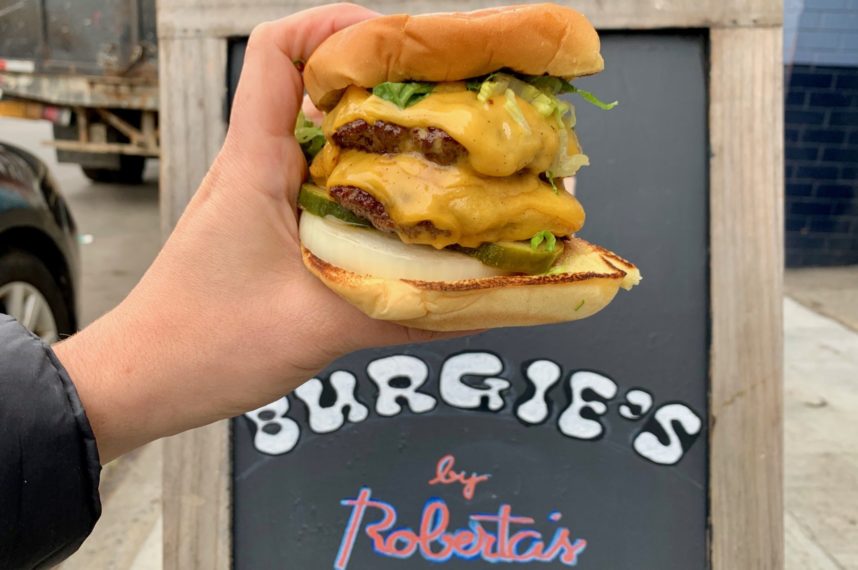 Burgie’s, the new Bushwick joint from the people who brought you Roberta’s, opened in late December but quickly shut down again in the beginning of January due to a gas line break. But today, Jan. 28, they’re back at noon! We were lucky to visit before this disaster, and recommend making your way over ASAP. Their burger forces you to live in the moment, to treat yourself to the perfect bite—a combination of melty cheese, juicy beef, fresh white onion, crunchy pickles, and creamy Thousand Island dressing, tucked into a soft potato roll. If a 4-ounce patty doesn’t seem like enough, go ahead and make it a double. 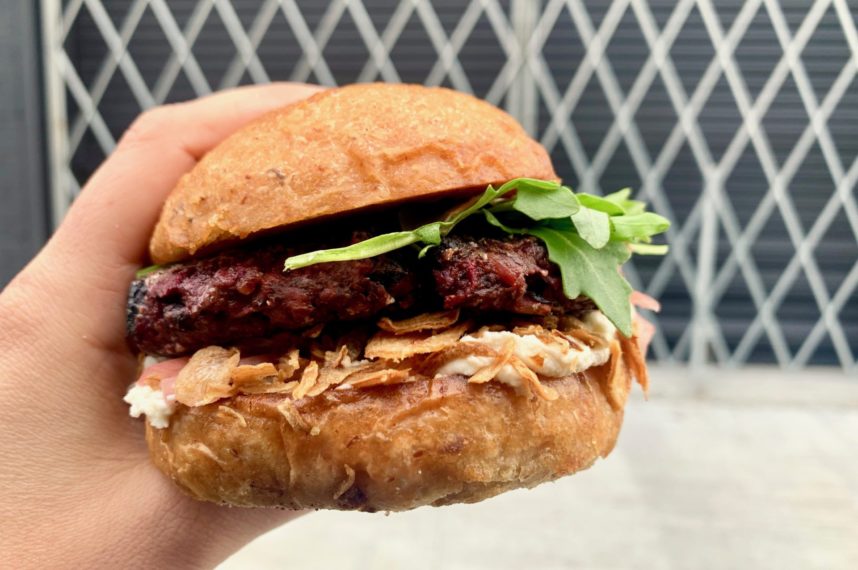 The Vurgie Burgie, which sounds like a creation of The Muppet Show’s Swedish Chef, makes a hearty vegan option, with a pleasantly sturdy, beet-laden patty, fresh arugula, crispy fried onions, tangy-sweet pickled onions, and a creamy layer of vegan “cheese” on a toasted bun. There’s nothing about this veggie burger that feels like a substitute for the original Burgie. It’s a totally different beast and it has such a depth of deliciousness that you might want to grab one of each. 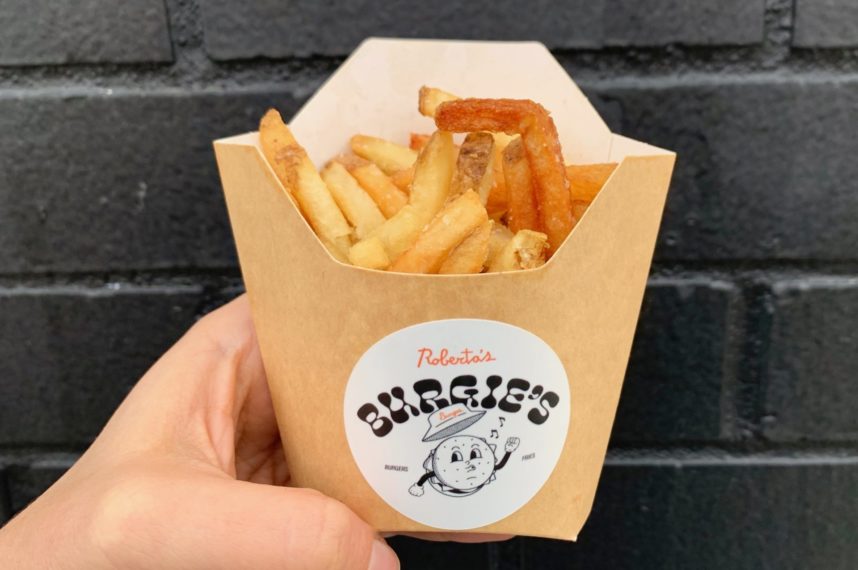 Now, there’s really only one thing that I’ve learned to truly appreciate during the pandemic, and that thing is a perfectly crisp french fry. Sure, I’m grateful for my husband and children, but I’m more grateful for them when we’re all sitting in the car together, snacking on fries, especially when they’re salty, browned-on-the-outside, and creamy within, like the kind they serve at Burgie’s. In this era of home-cooked meals and delivered dinners, it’s east to forget just how delicious a fry can be, but Burgie’s hand-cut version quickly opens the floodgates to food memories from brighter days. 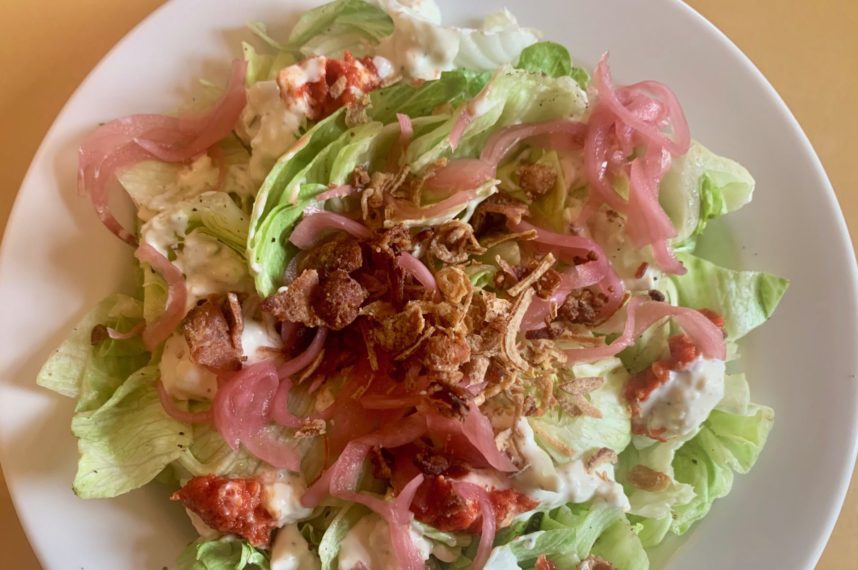 The wedge salad is less car-friendly than burgers and fries, and it’s the one item I’d recommend bringing home to assemble later. Crunchy iceberg comes in a cardboard container along with a little container of crispy fried shallots, another filled with crunchy-salty bacon bits, another with picked onions, and a slightly larger cup of rich blue cheese dressing in one side and a dollop of sundried tomato paste in the other. It’s basically a salad kit that you can stash in the fridge, and mine was still fresh and excellent when I remembered to eat it the next day. 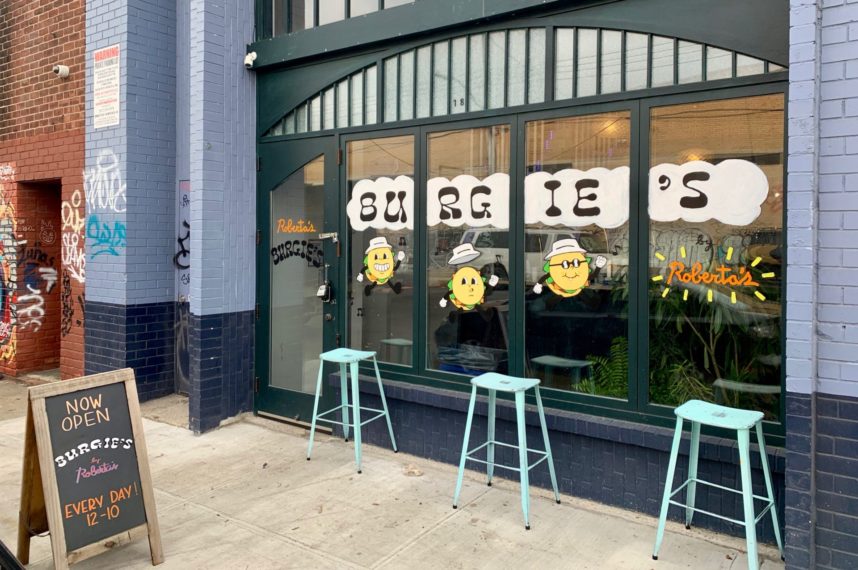 Someday it’ll be nice to savor a Burgie inside their high-ceilinged space, where long rows are beer taps are not yet in use. Maybe you’ll stop in after a visit to The Block, Vans’ indoor skate park which is located next-door to the restaurant. Maybe you’ll to nestle into a booth with your crew, or sit at the bar, gazing into the arched openings behind the tall, neon-lit wall, where a large collection of vintage Happy Meal prizes line the shelves. For now, you’ll eat your burger on the sidewalk or in a car, which is where you may have eaten your first burger as a kid, with one of those little plastic figures sitting in your lap.

I know a few car-owning moms who’ve been making regular trips to the McDonald’s drive-thru window throughout the pandemic, desperate for somewhere to go, for a easy meal that won’t invoke the wrath of their children, and just to share an occasion in their own childhoods that was always happy—the simple act of eating burgers in the backseat. Burgies doesn’t have a drive-thru option, but it does have $10 Bambino Box, including a kid-sized 3 oz. burger, fries, and a juicebox, just waiting for memories to be made.